Pittsburgh Mayor on Pro-Bike Plan: It’s Not the 1970s – Next City

Pittsburgh Mayor on Pro-Bike Plan: It’s Not the 1970s 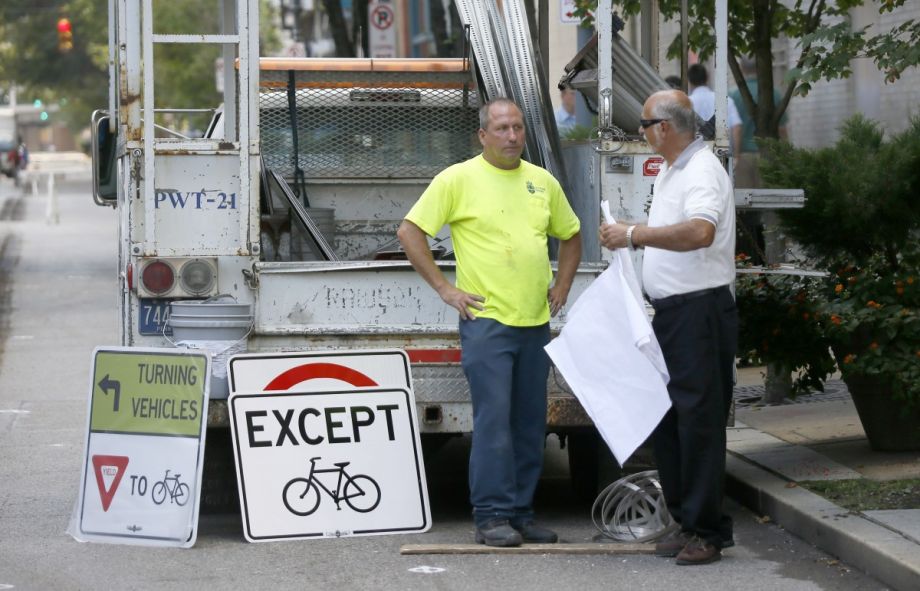 Pittsburgh may not be the first place that comes to mind when you think about great cities for bicycling in the United States, but that could change in very short order, thanks to a coordinated effort among elected officials, local bike advocates and the national group PeopleForBikes.

Over the summer, Pittsburgh started building protected bike lanes in a few key points of the city, including the downtown business district. The first three lanes are the initial installments in a plan that will see five miles of such protected infrastructure go in around the city in the next two years — an aggressive timetable in a nation where allotting street space to any vehicles other than cars can spark months and even years of debate.

Pittsburgh was one of six cities selected earlier this year by PeopleForBikes to participate in its Green Lane Project, which takes municipal leaders on tours of cities with state-of-the-art bike infrastructure, such as Amsterdam and Copenhagen.

Pittsburgh Mayor Bill Peduto was one of the people to take that tour, and he came back eager to buy a bike for himself — and to position his city as a national leader in street design that accommodates bicycles.

In a new video just out from PeopleForBikes, Peduto says he sees the new lanes as being part of a comprehensive approach to revitalizing Pittsburgh’s dense core, which also has a compact street grid and robust transit service.

Pittsburgh has a strong bike advocacy group, Bike Pittsburgh, which maintains a solid relationship with city government and has been instrumental in planning the new protected lanes. Bike Pittsburgh has also been responsible for one of the more striking bike-safety PSA campaigns of recent years, Drive With Care. The ads, which are meant to break down the barriers between drivers and people on bikes and encourage safe driving, show a variety of ordinary folks in work or school clothes standing next to their bicycles, with captions such as “Nurse. Mother. Rides a Bike. Operate With Care.”

The city already has about 25 miles of off-street bike trails, including many riverfront routes. The protected bike lanes going in, as well as those planned for the future, will help to knit those trails together into a truly utilitarian network that will allow for safe travel by bike in many parts of the city.

In the PeopleForBikes video, Mayor Peduto emphasizes the need for Pittsburgh to take a modern approach to the commuting needs of its citizens. “It isn’t the way it was in 1970,” he says. “Not everyone’s dream is to have their own car and use it to get to work.”

The mayor notes that Pittsburgh is committing to this vision despite what many might see as significant obstacles: hilly topography, narrow streets and several bridges. “We have all of the detriments to creating a bike system that people could argue,” he says. “But we’re still doing it, and we’re going to beat every other city.”