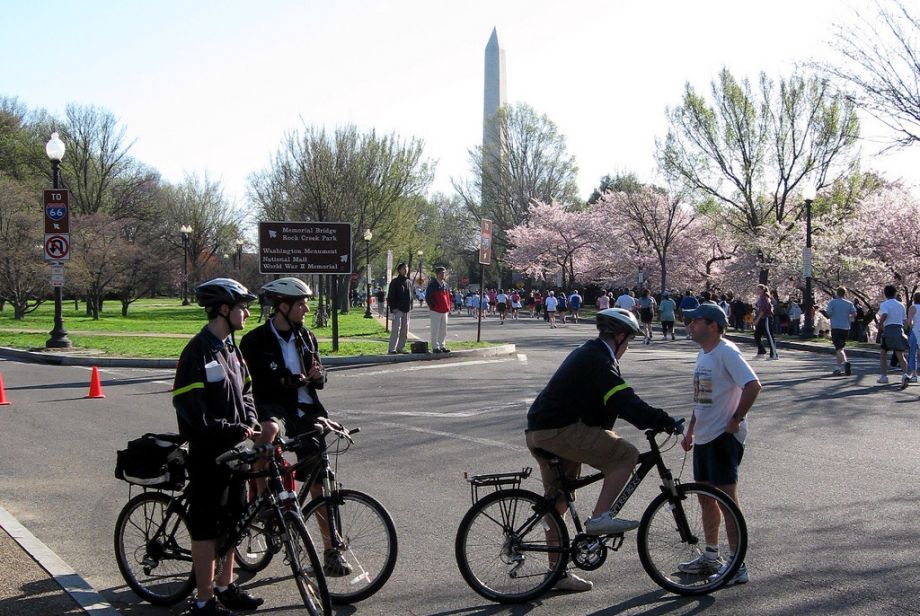 Course marshals at the Cherry Blossom 10K in Washington, D.C. (Photo by Alan Kotok, via Flickr)

For the second time in a row, Boston and Washington D.C., have topped a biannual report for the share of commuters who bike or walk to work in the 50 most populous U.S. cities — but this year, D.C. has narrowed the gap between them to a dead tie.

According to the Alliance for Biking and Walking’s 2016 Benchmarking Report — a breakdown of non-vehicular mode share in the U.S. released this week — 16.7 percent of both cities’ commuters bike or walk to work. That’s a 2 percent increase in D.C. since the 2014 report, with Boston’s rates unchanged in the same time period.

The cities also tie for pedestrian and cyclist safety, at a rate of 1.6 fatalities per 10,000 commuters.

San Francisco, Seattle and Portland round out the top five most populous cities with the highest cycling and biking rates, rankings unchanged since 2014, and each experienced modest gains. New York, Philadelphia, Minneapolis, Chicago and Baltimore follow in the top 10. Only Philadelphia does not also appear in the top 10 safest pedestrian/cycling cities, coming in at number 11. 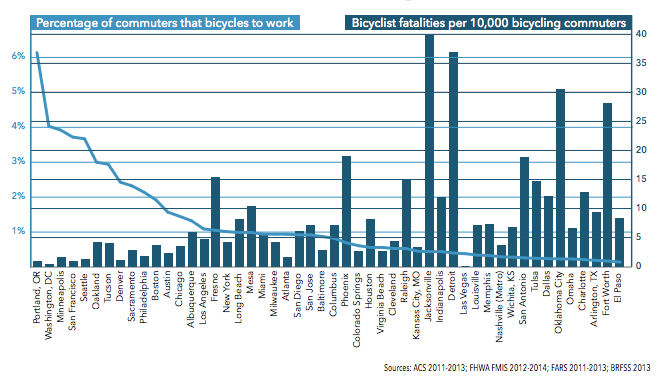 This year the report calculated cycling and walking rates in all 50 states and the 50 most populous cities, plus 19 additional cities of various sizes. Last year New Orleans and Honolulu made the top 10 mode share list in place of Chicago and Baltimore, but this year were shifted onto the smaller cities list.

Overall, the percentage of commuters walking to work in the largest cities remained stable at 5 percent. Commuter cycling rates increased slightly from 1 percent in 2014 to 1.2 percent today.

The report also highlights an increase in government support for bicycle- and pedestrian-oriented policy measures. Forty-one of the largest cities have a published goal to increase walking, up from 36 in 2014; forty-seven have a published goal to increase cycling. Twenty-eight cities have complete streets policies, compared to 23 in 2014. Forty-six have a bicycle and/or pedestrian master plan.

More cities also have plans to fund these initiatives, but those with annual spending targets for cycling and bicycling are still in the minority: just 16, up from 10 in 2014.

The report also notes demographic trends in just who, exactly, is biking and walking to work. In all of the cities studied, women walk equally but bike to work at far lower rates than men. They make up just 29 percent of bicycle commuters overall.

The study dedicates a section to millennials, the group of Americans study after study has deemed least car-centric. The report cites a 2013 Urban Land Institute study that found that only 77 percent of millennials commute by car, compared to 90 percent of baby boomers and 92 percent of Generation X.

The rest of the report’s many findings, including the complete mode share, fatality and infrastructure spending rankings of the 50 most populous cities, and a breakdown of cycling/walking rates for women, low-income residents and people of color can be downloaded here.