3 Biggest Barriers Holding Cities Back on Climate Change – Next City 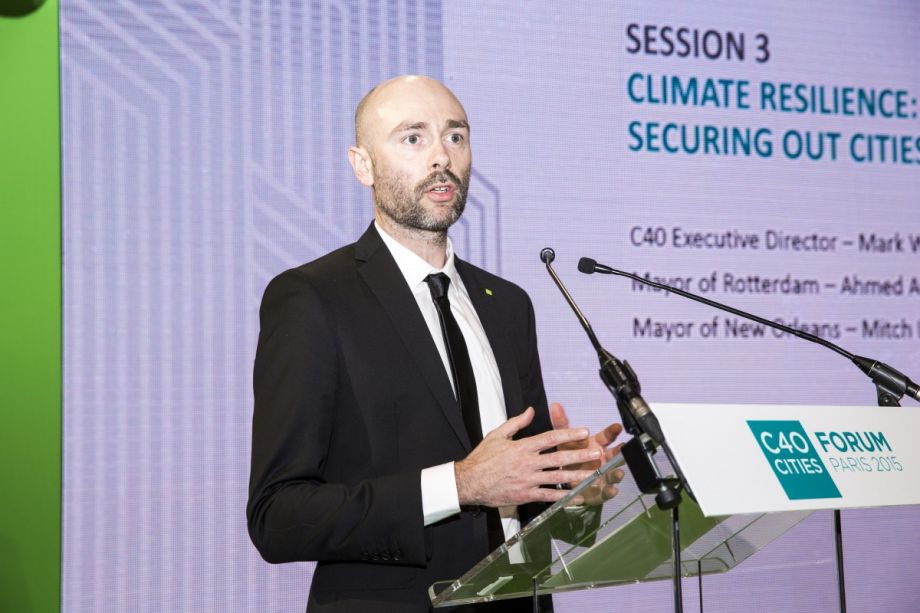 C40 Cities Climate Leadership Group, led by Mark Watts, above, released a report at COP21 on how cities can reduce emissions. (Credit: C40)

A report released at COP21 today serves as a rallying call for mayors and others — chiefly national and regional governments and private companies — to step up and form partnerships that can help cities combat climate change.

“Potential for Climate Action” was compiled by the C40 Cities Climate Leadership Group and Arup, a global consultancy firm. Instead of focusing on the activities, programs and policies cities have already taken and their impact, the report looks at the actions cities could be taking to reduce greenhouse gas emissions and become more resilient in the face of the effects of climate change, but currently are not. It also examines the barriers holding city leaders back from creating those programs and policies (deemed “actions” throughout the report). Here’s what it says.

C40 cities have made significant strides since COP15 in Copenhagen in 2009, adopting an increasing number of climate actions each year and increasing the scale of the actions they are taking. In 2015, almost half of actions are at a citywide scale, up from just 15 percent in 2011, and city mayors have plans to expand more than 75 percent of the climate actions already in place. Currently, cities are taking almost 10,000 climate actions.

In light of this progress, the report asks a critical question: “How do we leverage this momentum to deliver even greater impact in the future?”

Based on current trends of consumption and infrastructure development, within five years the world will be “locked in” to future emissions that would exceed the globally safe carbon budget. A third of these emissions will be “controlled” by cities, meaning city mayors and citizens play a crucial role. C40 found about 27,000 potential actions that cities have not yet attempted to implement. Out of those, about 2,300 priority actions were selected based on the following criteria:

Overall, actions that are achievable and can have the most impact are prioritized most highly. Of course, C40 does not expect every city to take on all 2,300 actions. “It is not realistic to suggest that cities should — or even could — be taking every possible action in the short term,” it said. “Some actions may also be entirely inappropriate for certain cities.”

A third of actions not being taken are in the building sector, despite the fact that buildings typically account for 45 percent of greenhouse gas emissions. Another third are from the private transport, outdoor lighting and adaption sectors; just four of 11 sectors make up two-thirds of actions that cities are currently not taking. Because of this, buildings will continue to be a major focus moving forward — a huge 66 percent of the priority actions are within the buildings sector.

The existence of so many untaken, yet high impact and achievable actions points to underlying factors holding cities back. Here are the three most significant types of challenges cities are facing:

1) Economic and financial: The proposed 2,300 priority actions will cost about $6.8 billion to catalyze. That means access to funding is the single biggest obstacle to cities delivering greater climate action. In addition to access to capital, many cities face limited financial independence or have difficulties getting the expertise and advice they need.
2) Political and leadership: City governance, collaborating with other partners outside the city and the strength of leadership from key actors all impact cities’ abilities to act. For example, Barcelona highlighted the difficulties of creating climate change plans for a 20-30-year horizon, using climate projections of 100 years, when governments change on a four-year cycle.
3) Institution, regulatory and legislative: Conflicting interests among government agencies, policies and laws make coordinating unitary action across government difficult. One challenge many cities face in this area is national legislation failing to promote climate action at a citywide level.

Other categories of challenges mentioned include: information and knowledge; social and cultural; technology and infrastructure; and physical and human context.

Half of challenges over the past five years have not been overcome despite cities investing resources to do so. And cities have not even been able to identify an approach to address 20 percent of the challenges they face, demonstrating the extent to which “challenges can become embedded in cities.”

Challenges also differ by geographical regions. Institution, regulatory and legislative challenges are the most dominant in South and West Asia, while political and leadership challenges prevail in European cities. In North America, resources and funding are the major inhibitor of climate action.

For any effective action on climate change, better partnership and collaboration are crucial. Nearly three-quarters of climate challenges cities face require collaboration with national governments, the private sector and other actors. “Cities have shown that they are willing and able to act,” the report said, “but stronger relationships within and beyond the city government will be pivotal to enable them to unlock their full potential.” Notably, 65 percent of cities’ challenges are associated with government entities, particularly the national and municipal levels. Rather than being a partner, national governments often prevent city governments from taking stronger action.

Furthermore, cities that collaborate with other actors are able to deliver twice as many climate actions as those that govern through a less partnership-based approach. “There is a fundamental role for business and civil society, as well as government at all levels, to facilitate cities’ ongoing climate leadership,” Gregory Hodkinson, chairman of Arup, said. “Only with a concerted, multi-stakeholder effort can the progress we’ve seen to date be sustained.”