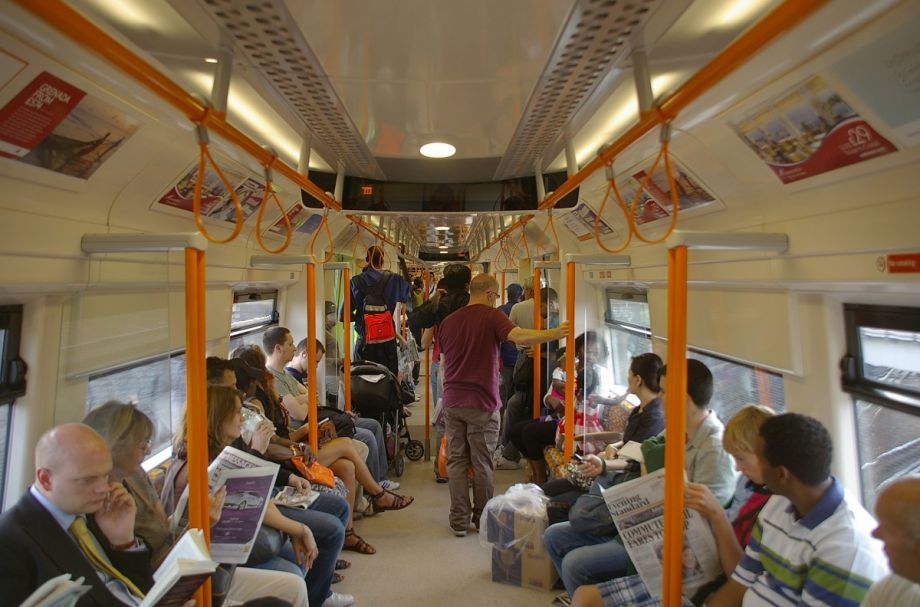 Passengers on the booming London Overground. (Photo by mattbuck)

London Ready to Jump on the Belt Metro Bandwagon
Ring roads, beltways, circumferential freeways — whatever they’re called, highways that encircle large cities on their fringes are common throughout the developed world. Metro lines that do so, on the other hand, remain rare: While several cities do have circular subway lines, most of them carry riders around the urban core.

Continued suburban growth has now led some European cities to consider such routes. Paris is currently building two metro lines that, taken together, will form a circle around the city through its inner suburbs not far beyond its belt highway, the Boulevard Péripherique. The lines are part of a series of new metro routes that would allow Paris suburbanites to access more of the region in 45 minutes or less.

The Guardian reports that the proposed Zone 3 orbital metro line — informally dubbed “R25,” after the M25 London Orbital motorway — is part of a £200 billion ($336 billion U.S.) package of infrastructure improvements London Mayor Boris Johnson promoted at a news conference in the inner suburb of Barking on July 30th.

Johnson’s “London Infrastructure 2050” proposal would include several new crossings of the River Thames and a new inner orbital motorway tunnel in addition to the new rail line. He also called for fast action on a proposed second north-south express metro route through central London to complement the Crossrail project currently under construction, saying it was needed to relieve congestion on existing Tube lines.

Johnson said that with the improvements, the down-at-heels eastern suburb of Barking “will be Piccadilly Circus here in 100 years’ time.” Further work on an 11,000-unit brownfield housing development in the borough is on hold until adequate rapid transit can be provided.

The Zone 3 orbital’s value has already been confirmed by the success of the London Overground, a network of suburban rapid transit routes forming a rough belt around the city using former National Rail lines and the former East London Section of the Underground Metropolitan Line. Since its creation in 2007, ridership has boomed as the network steadily expanded.

San Diego Puts New Trolley Line to UCSD on Fast Track
One of the largest of San Diego’s outlying activity hubs, the University of California-San Diego (UCSD) campus northwest of the city, will get fast transit connections to downtown via an extension of the San Diego Trolley light-rail network now being fast-tracked through the review process.

The San Diego Association of Governments (SANDAG) seeks to start building the Mid-Coast Corridor Transit Project in 2016, with opening slated for 2019. The 11-mile, nine-station extension would serve the VA Medical Center, UCSD’s west and campuses, and the Westfield UTC shopping mall. A rapid bus service called SuperLoop, set to begin this fall, will connect with the line and provide circulator service in the UCSD area. It will be operated as an extension of the Blue Line, the first Trolley route, promising UCSD students a one-seat ride from campus all the way to the Mexican border.

The local half of the project’s $1.7 billion cost will come from the half-cent TransNet sales tax approved by San Diego County voters in 1987 and extended through 2048 in 2004. SANDAG is seeking a federal New Starts grant for the remaining half.

With 30,000 students, UCSD is one of the largest communities not currently served by high-quality transit in the San Diego area, and SANDAG arrived at light rail as the best option after an extensive review process. The Transport Politic, however, was critical of the proposal when it first surfaced in 2010, pointing out that its cost left little money for rail transit in corridors like Mid-City where such service could promote walkable development. As the parallel Coaster line is also being double-tracked as part of the TransNet program, the Trolley could be extended using that route thanks to the removal of federal regulations mandating separation of light rail and mainline railroad equipment.

Developer Seeks Massive Expansion of Citi Bike Network
Lately, a growing number of urbanists have been arguing that bike-sharing can be a development catalyst as part of a multimodal transportation system that fosters pedestrian-scale communities. It appears that one major developer agrees with this analysis.

News reports in outlets from The Wall Street Journal to the Queens Chronicle state that REQX Ventures, an affiliate of real estate developer Related Cos., is close to a deal to buy a controlling interest in the operator of New York’s Citi Bike bike-sharing network with an eye on expanding it into Upper Manhattan, Queens and outer Brooklyn.

At present, Citi Bike’s 95,000 members can obtain bikes at 330 stations in Manhattan and Brooklyn. But all the Manhattan stations are south of 60th Street and those in Brooklyn are confined to Downtown Brooklyn and neighborhoods immediately adjacent.

Related has been negotiating with Portland, Ore.-based Alta Bicycle Share to buy a majority stake in the company, which operates bike-share systems in several other cities in addition to New York. The company would then add stations as far north as 130th Street in Manhattan, in Long Island City and Astoria in Queens, and in Prospect Heights, Crown Heights and Red Hook in Brooklyn, among other locations. The number of bikes available for rental would roughly double, from 6,200 to more than 12,000. (For more, read Next City contributor Sarah Goodyear’s recent piece, “What’s Missing From New York’s Reported Citi Bike Deal.”)

The deal would also allow Alta to raise membership rates. The company says it currently loses money on the $95 annual memberships because members rent bikes at higher rates than were originally projected while not enough visitors and occasional riders pay the higher hourly rental fees. Memberships could rise to $140 annually after the deal goes through.

If it goes through, the city Department of Transportation must also sign off on the purchase. While the de Blasio administration may be finalizing details, it’s not certain that NYCDOT is along for the ride yet.

Know of a new transportation project you think should be included here? Tweet @MarketStEl using the hashtag #NewStarts on Twitter.