Forgotten Cistern Under Houston Park Opens for Tours, and Soon for Art – Next City

Forgotten Cistern Under Houston Park Opens for Tours, and Soon for Art 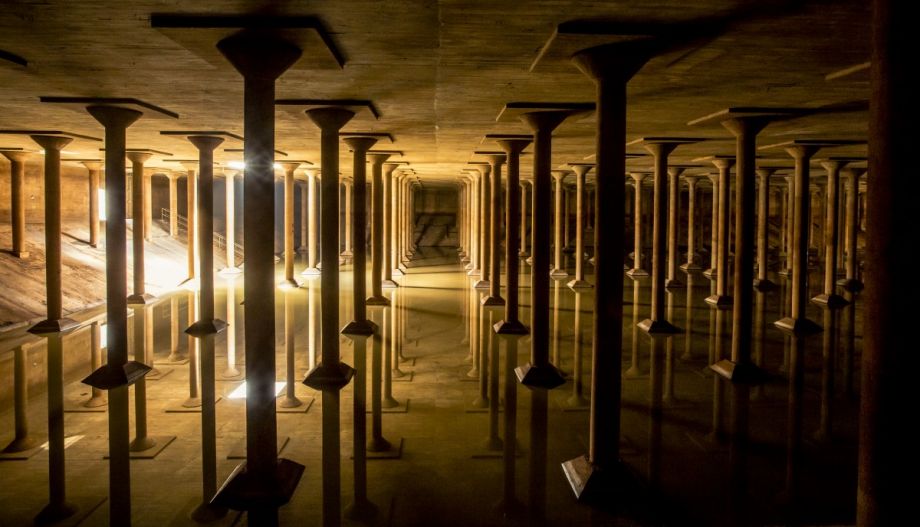 “Hellooooooo cistern!” Anne Olson called into the darkness. For 17 full seconds, her voice echoed back, ricocheting off the 221 concrete columns that hold up the cavernous 87,500-square-foot hall, its sunken floor shimmering with three inches of water. Outside, up above, the sun was hot and merciless, but inside Houston’s Buffalo Bayou Park Cistern, it was dark, quiet and cool.

A former city drinking water reservoir, the Romanesque cistern was rediscovered beneath the park during 2012 renovations, and now, increasingly, it’s open to the public. Last Friday, 30 people stood behind a waist-high railing on a walkway that rings the space, their eyes adjusting to the darkness until the columns’ reflections came into view. They were among the first group of visitors to receive a public tour of the cistern, on the first weekend the Buffalo Bayou Partnership (BBP) began offering them. The tours are part of the nonprofit’s plan to develop a public arts program for the sepulchral space, to transform it through light, sound and video installations, says Olson, who’s BBP’s president. In the first three days of tours, 1,000 people ventured inside, and 2,000 more made reservations to get a peek in the future.

Until just four years ago, the space had been forgotten. “It had just been sitting there,” Olson says. The 15-million-gallon reservoir was constructed in 1926 and decommissioned in the 1970s when the space sprung a leak that could never be located. Decades later, the BBP began its $58 million renovation of Buffalo Bayou Park, which is owned by Houston Parks and Recreation Department, but operated and maintained by the partnership. BBP was looking for a place to add more parking, so the Public Works Department transferred ownership of the cistern, located beneath a large lawn, with that use in mind. But when consultants from SWA Landscape Architects opened up the hatches that peered down into the reservoir, says Olson, “They were just blown away by the space.”

With its rows of stately columns, it has been compared to Istanbul’s Basilica Cistern. When hatches in the ceiling are opened to let in the sunlight, the columns reflections’ shine in full force, making the space look twice its size.

At first, those hatches were the only way into the cistern, via long, steep ladders. (Olson ventured down this way herself. “It was really scary,” she laughs.) Using a $1.7 million grant from the Houston-based Brown Foundation, the BBP brought the space up to code and renovated it to facilitate tours. They expanded the walkway around the space, installed a railing and rope lighting, drained the muddy water, and cleaned the interior. “But then we put the water back in,” says Olson. “Because one of the beauties of the site is that it has these incredible reflections.”

Visitors aboveground in Buffalo Bayou Park can peer into the cistern below through New York artist Donald Lipski’s installation “Down Periscope.” (Photo by Nash Baker)

The conservancy also created a dim, serpentine pathway leading visitors into the space from outside, sans ladders. “We wanted to make the entryway have a sense of mystery,” says Olson. Instead of plopping people directly from the sunshine into the shadows, the entryway’s curved walls create a cool waiting area where visitors’ eyes can adjust.

The potential uses for the space are myriad and tantalizing. Tours currently cost $2, and allow visitors to walk the entire perimeter, which takes about 15 to 20 minutes. There’s been talk of holding meditation sessions inside. “Some people see it as this, like, sacred space,” says Olson. BBP has also been in talks with local museums, including the Museum of Fine Art, Houston, about partnering on arts programming. The director of the Whitney Museum in New York even visited a few weeks ago. “He said it was one of the best industrial spaces he’s seen,” says Olson.

This won’t be the first time the nonprofit has utilized a former industrial space for art. The BBP owns other parcels east of downtown along the bayou, including one site with three or four massive gravel silos, which have been used to host video installations. The nonprofit also owns a 22-acre abandoned sewage treatment facility that it hopes to develop for parks-related uses.

“We’re starting to do some more planning in the East End, especially since we’ve accomplished a lot of what we wanted to do [in Buffalo Bayou Park and with the downtown trail system],” says Olson. “It still has a very, very industrial character, which we want to highlight.”