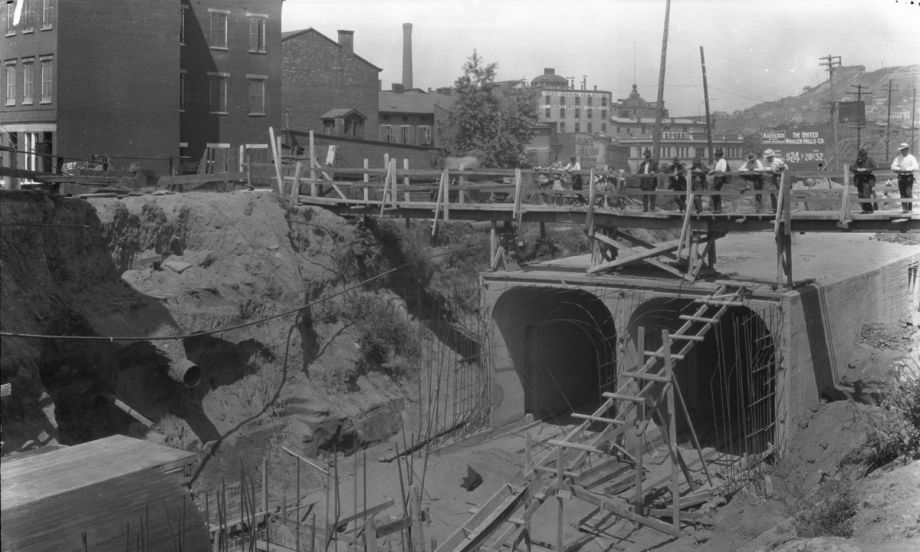 Residents look on construction progress for the Cincinnati subway tunnels along Findlay Street in 1921. (Credit: University of Cincinnati)

In 1916, the people of Cincinnati voted to fund the construction of a subway that would revolutionize the city’s public transportation system. One hundred years later, all that remains is a 2-mile stretch of abandoned tunnels below the declining Rust Belt city.

“Everyone has an idea,” says Michael Moore, director of transportation and engineering for the city of Cincinnati. “We’ve had people approach us about using the tunnel for everything from grain malting, to a water bottling operation, to night clubs — you name it.”

Most of these pitches die before gaining any momentum. The state of Ohio recently deemed the tunnel a “confined space,” making it unsuitable for commercial purposes, and the only entrance is through a hatch in the median of a busy street. The only utility the tunnel serves today is housing a water main and some fiber-optic cables — a purpose far from what early 20th-century planners had hoped for the subway. The transportation project was intended to secure Cincinnati’s right to the title of “capital of the Midwest” over competitors like Detroit, Chicago and St. Louis.

“There was speculative capital from around the country and around the world being thrown at the city of Cincinnati,” says Jacob Mecklenborg, author of Cincinnati’s Incomplete Subway.

By the 1850s, the largest urban tunnel and the longest bridge in the world were under construction in Cincinnati. The city was the sixth most-populated urban area in the country, well ahead of every other city in the Midwest. During the latter part of the century, the Cincinnati’s West-End and Over the Rhine neighborhoods were the most densely populated residential areas in the U.S. outside of New York City.

But the city needed a world-class public transportation system. An 1880s-built streetcar was met with widespread criticism for not serving the entire city and the expensive fare. (Many scoffed at shelling out 5 cents a ride — a considerable sum in those days.) So city officials envisioned a subway system rivaling that of New York City. It would offer affordable, equitable transportation and serve as the harbinger of urban growth beyond the crowded downtown district. Architects and engineers drew up ambitious plans, including Parisian-style boulevards atop underground railways and a towering Union Station on par with Grand Central. In 1916, a $6 million bond was approved to build what was dubbed the Rapid Transit Loop.

At the time, Cincinnati was one of the most financially stable cities in the country, and the railroad “promised to be the [era’s] least expensive American rapid transit project, per foot,” according to Mecklenborg.

Yet, just 13 years later, the Cincinnati Post had labeled the project a “botch,” and in 1930, the Rapid Transit Commission was dissolved. A new mayor, elected in 1926, denounced the subway, viewing it as a pet project of previous administrations. By 1927, the $6 million bond that started the project dried up, bringing construction to a halt. The mayor refused to issue additional bonds, and the Rapid Transit Commission failed to secure a private partner to build critical components of the subway. Public opinion shifted from its overwhelming support of the project a decade earlier.

The lore that grew out of the failed Rapid Transit Loop outlasted much of its physical infrastructure.

A locked door to the abandoned subway tunnels is seen from Interstate 75 near the Western Hills Viaduct.

Common myths about the Rapid Transit Loop focused on fundamental engineering errors. The turns were too tight for the subway to navigate. The tunnels weren’t large enough to fit the subway cars. But according to Mecklenborg, these rumors held no truth — the tunnels in Cincinnati were actually wider and taller than the tunnels in New York City.

The failure to revive the Rapid Transit Loop in the coming decades had nothing to do with flaws in its design. Cincinnati’s waning stature among Midwest cities resulted in lower demand for a subway system. Plus, the rising popularity of automobiles shifted focus from mass transit to the nation’s growing Interstate system. The 1950s saw the construction of Interstates 71, 74 and 75, which converged in Cincinnati.

The Ohio Department of Transportation build large portions of Cincinnati’s Interstates on land the state had originally purchased for the Rapid Transit Loop. This saved money by avoiding right-of-way acquisitions and eminent domain — but there was a trade-off.

“The bulldozers fired up and [demolished] the above-ground portions of the subway that had already been finished,” Mecklenborg says.

Stations, platforms, grating and above-ground tunnels were cleared to make way for the Interstates. The Department of Transportation neglected to build center medians where tracks could be laid, showing little regard for future revival of the subway. Today, all that remains of the Rapid Transit Loop is the abandoned underground tunnel — unseen and largely unknown.

But with the rise of urban congestion — and pollution — in recent years, the need for comprehensive mass transit in Cincinnati has returned to the fore. (A new 3.6-mile streetcar loop is expected to open for service this September.) In its 2015 State of the Air report, the American Lung Association ranked Cincinnati 23rd on its list of cities with the highest year-round ozone pollution. One of the primary sources of ozone pollution is automobile emissions, making the reduction of traffic a priority for the city. (Cincinnati also has the 8th highest year-round particle pollution, which primarily comes from coal-powered power plants in and around Ohio.)

Janice Nolen, vice president of the American Lung Association and director of the State of the Air report, emphasizes that the failed Rapid Transit Loop wasn’t the cause of Cincinnati’s ozone problem. But reviving it can make a difference moving forward.

“Having options other than driving definitely helps,” Nolen says. It won’t completely solve the problem, but “anything you can do to drive less is a good thing to reduce pollution.”

According to the American Lung Association, lower socioeconomic status has been “consistently associated with greater harm from air pollution.” Urban neighborhoods adjacent to busy highways tend to be low-income, which causes exposure to higher rates of pollution from heavy traffic. In Cincinnati, most low-income neighborhoods either border or are split by an Interstate. Residents in these neighborhoods “have less access to healthcare” and experience “higher levels of asthma, diabetes, [and] cardiovascular disease that can put them at risk,” Nolen says.

For those hoping to see a resurrection of the Rapid Transit Loop, there is a glimmer of hope. In 2007, Cincinnati commissioned a feasibility study that concluded the tunnel is in sound condition and could support a light-rail system. Over the last few decades, the city has spent millions of dollars maintaining the tunnel, mainly repairing minor damages and leaks. Some Cincinnatians object to spending tax dollars on an empty tunnel, but the only other option is to fill the tunnel, which would cost the city $19 million.

“With an asset like that, you want to make sure you can preserve it and hold onto it,” says Michael Moore. “To reconstruct it today would be unaffordable.”

Of course, reviving the subway would also take tens if not hundreds of millions of dollars, and the original plan for the Rapid Transit Loop would need to be scrapped and started from scratch. And Mecklenborg charges that many in power in Cincinnati would never support restarting the project. A new subway system, after all, could upset the real estate status quo, shifting property value from wealthier areas to low-income neighborhoods that are currently adjacent to the Interstate. “There’s nothing that more profoundly affects the value of a specific piece of land [in an urban area], than a subway,” says Mecklenborg.

Scott Rodd is a D.C.-based freelance reporter whose work has appeared in the Washington Post, the New York Observer, Think Progress and Salon, among other publications.