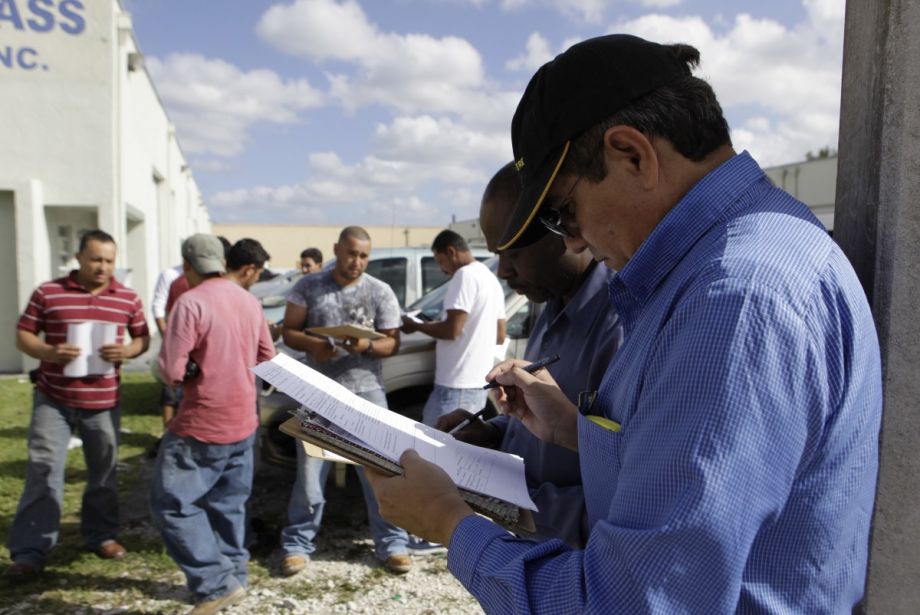 Florida construction workers fill out complaints against a contractor and sub-contractor for back wages, under Miami-Dade County's anti-wage theft ordinance. (AP Photo/Lynne Sladky)

Wage theft — when employers withhold wages, tips or benefits — disproportionately affects low-wage workers. A 2009 study by the National Employment Law Project of nearly 4,500 low-wage workers found that more than 60 percent were shorted by their employer each week, losing about $2,634 per year in unpaid wages. Nationally, employees are denied billions of dollars in unpaid wages a year.

The Wage Theft Prevention and Wage Recovery Act, proposed in Congress on Wednesday, would give workers the right to full compensation for all of the labor they perform, as well as the right to receive pay stubs and paychecks in a timely manner, and tools and assistance to recover stolen wages. The legislation would introduce a $2,000 fine for employers that violate minimum wage and overtime protections, and increase the amount of time employees have in which to file a claim.

“When bosses don’t pay their workers what they’re owed, it robs them of money they earned for their hard work and hurts businesses that play by the rules,” Brown said in a news release. “We must create a system where employers who steal wages are held accountable and workers have the tools they need to recover their wages when they’ve been cheated.”

In Cincinnati, as in Houston, companies found to be engaging in wage theft are barred from doing business with the city.

As Oscar Perry Abello reported for Next City last year, catching employers engaging in wage theft can be elusive in the gig economy. But the Department of Labor’s Wage and Hour Division has responded by initiating more of its own investigations into employer wrongdoing, instead of just waiting for employees to file claims. Since 2009, the department has recovered $1.3 billion in back wages for 1.5 million workers, who then received an average of $890 each. A new online tool is also making it easier for workers to file claims themselves, regardless of immigration status.