70 Photos Call on Cincinnati to Think About Past vs. Present – Next City

70 Photos Call on Cincinnati to Think About Past vs. Present 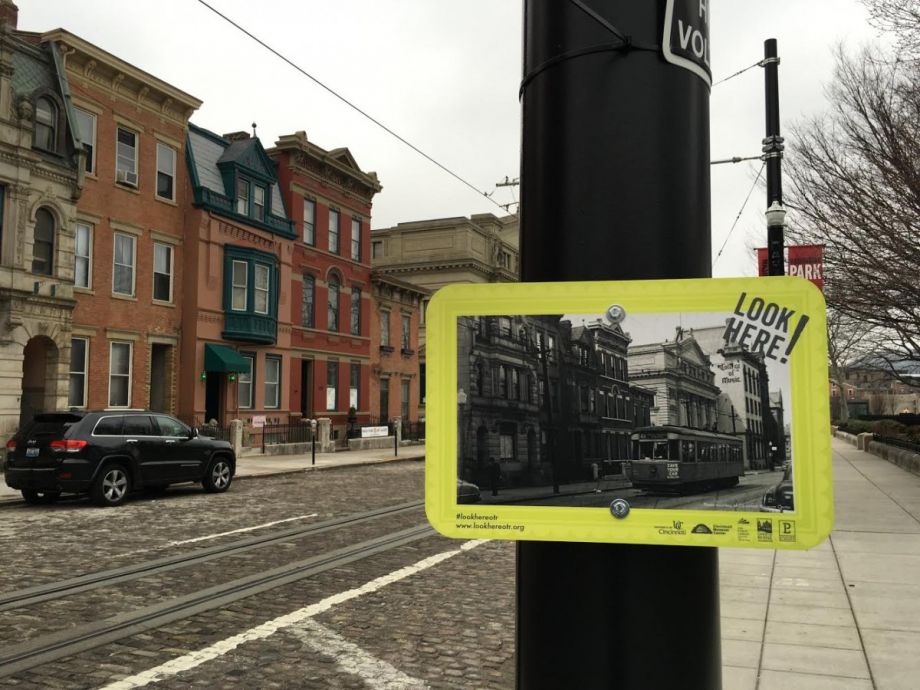 Cincinnatians have a few more weeks to catch a glimpse of history in the Over-the-Rhine neighborhood. The outdoor exhibition “Look Here!,” a series of 70 historic photographs mounted on public poles in a way that allows viewers a perspective to contrast past and present, was originally planned to run until March 21. But the city extended it for several weeks.

Creator Anne Delano Steinert, a doctoral student at the University of Cincinnati studying urban and public history, says the project has multiple goals: to encourage historic preservation by recognizing the structures and streetscapes that have already been lost, to create for viewers an imaginative experience of the past, and to engage participants through a simple, accessible, non-technological intervention.

The photos, which range in date from the late-19th century through the 1940s, are presented with a short caption. The exhibit has a website and a hashtag, of course, but don’t look on the signs for any QR codes to scan with your smartphone so you can bury your nose in digital information. Steinert wants viewers’ interaction to happen in the moment, on the street, and focus their attention on how much a rapidly changing neighborhood has already transformed.

With “Look Here!,” Steinert is hoping to inspire other creators as well. Her website includes a how-to page. People’s Liberty, a philanthropic lab that granted some funding for the project, created two videos that follow Steinert as she navigates the logistics of installing art on city property, from fabricating signs to the proper specs, to getting special permission to mount them lower than 7 feet above the sidewalk.