China: A Sustainable Example for the U.S.? – Next City

China: A Sustainable Example for the U.S.? 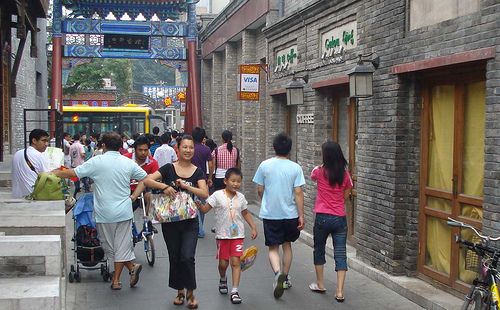 Bicycles and pedestrians share the street in Beijing. Ivan Walsh

During the 2008 Summer Olympic Games, American athletes, officials and fans expressed concerns about Beijing’s pollution levels. Star marathon runner Haile Gebrselassie, did not compete due to “pollution, heat and humidity” concerns and the U.S. Olympic Committee lead exercise physiologist encouraged American athletes to wear face masks prior to competing. Bearing in mind Beijing’s unattainable blue sky and the country’s “hard-earned reputation for long-neglected and fearsome environmental problems,” I was surprised by a December 2009 finding that the average American citizen is less green than his or her Chinese counterpart. The authors of the report, “The Greenness of China: Household Carbon Dioxide Emissions and Urban Development,” Siqi Zheng, Rui Wang, Edward L. Glaeser, and Matthew E. Kahn contend that U.S. per-capita carbon emissions are about five times greater than that in China.

When reading this report, I first felt surprised (China, really?), and then inspired (China, really!) by China’s example in per capita energy consumption. This report’s authors found key discrepancies between the type and amount of energy use in China and the U.S. when looking at transportation, electricity, heating and home fuels. Americans emit significantly more carbon for residential and personal transportation uses. Heating is a substantial energy drain for the Chinese, while Americans use a considerable amount of electricity for air conditioning. To explain these differences, the authors write, “A poorer country can do without air conditioning and cars, but not without winter warmth.”

While the comparatively higher carbon emissions in U.S. cities can be attributed to the increased consumption that accompanies wealth accumulation, the authors stipulate that wealthy households need not generate more pollution and can even reduce their carbon emissions. Expensive heating fuels, such as natural gas, are cleaner and less carbon intensive than cheaper and more plentiful alternatives, like coal. Moreover, higher-income individuals in China often do not purchase the luxuries that are considered necessities for many middle- and upper-class Americans. For example, in the “relatively wealthy” city of Beijing, only 23 percent of the population owns cars, compared to 44.3 percent of households in New York City (2000 census) .

The authors look ominously to the future as they consider the environmental impact of China’s carbon emissions should the growing middle class seek a lifestyle similar to its American counterpart. Nonetheless, if Chinese households maintain current energy-use levels regardless of increased wealth, the carbon emission increase should only be “modest.” Lifestyle and policy trends in Chinese cities support sustainable growth. The authors note that temperate cities have minimal heating and cooling needs. Eight of the ten greenest Chinese cities surveyed do not receive free heating services from the government and are not exceptionally hot in the summer, meaning that development in and migration to these areas does not increase per capita carbon emissions. Moreover, high density and license plate quotas in Chinese cities limit car ownership and emissions. Finally, China is still developing its built environment. Infrastructure choices and energy policies, such as China’s recent initiative to cut its carbon intensity by 40 percent before 2020, significantly reduce carbon emissions.

The report’s findings provide a reasonable model for American urban development. Instead of a encouraging mass migration to temperate urban areas – the average monthly temperatures in Atlanta range from 43 to 79 degrees Fahrenheit (a bit too hot) and those in San Francisco are between 51 to 63 degrees Fahrenheit (too few beach days!) – the economic and intellectual spheres should support cities committed to incorporating place-based distinctions into their sustainability plans. Cities with high energy needs might build hydro, solar, or wind plants, while fairly spread-out urban areas can develop their bicycle infrastructure. American leaders and planners might also emulate China’s approach to sustainability. According to Grist.org article, “Copenhagen Revealed a New Dynamic between the U.S. and China,” China takes “extensive action” to reduce carbon emissions by investing in environmental research, clean-energy industry and low-carbon infrastructure, while the U.S. “talk[s] big talk in international negotiations but do[es] very little back home [to reduce carbon emissions].” The U.S. climate bill is weak with loopholes, an unambitious carbon reduction goal, and continued oil and coal subsidies.

Though the 2008 Summer Olympics only strengthened the deeply-rooted association between China and environmental crisis, this event also began the country’s exemplary pollution-reduction efforts. The authors write, “The 2008 Olympics caused a massive public investment in infrastructure and environmental improvement.” By following China’s example, the U.S. will unquestionably challenge established perceptions of China and alter the direction of desire. That is, middle-class Americans will aspire to Chinese lifestyles rather than the Chinese following American patterns of consumption. And if this happens, the authors need not worry about a looming environmental crisis.