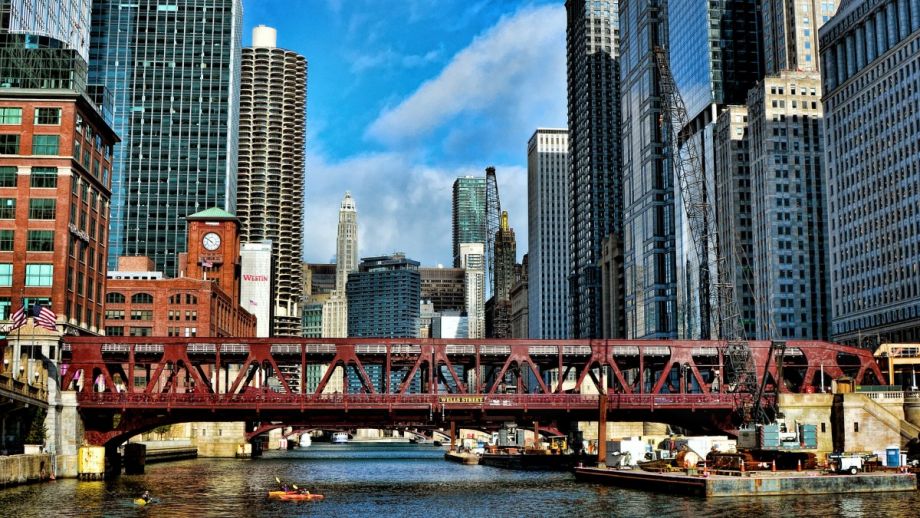 Details of the Resilient Chicago strategy — the result of Chicago’s inclusion in the now-shuttered 100 Resilient Cities initiative— were formally announced in February of this year, and so far, at least, the city is forging ahead.

“This was a multi-year planning process, which engaged with our Steering Committee and listened to stakeholders from every corner of the city,” says Stefan Schaffer, the city’s chief resilience officer. “As a result of their diligence and the comprehensive report we created together, we are confident these will continue to be priorities during the transition and the next administration.”

The Resilient Chicago plan was developed over a two-and-a-half-year process launched in the fall of 2016 with the goal of identifying ways to bolster the city’s ability to prepare for future environmental and socio-economic shocks.

Public engagement included a workshop involving 100 civic and community leaders, a series of meetings involving hundreds of participants and over 130 agencies and an online survey.

The city used this feedback, combined with an analysis of the city’s past and current programs designed to address four key shocks (storms, economic crash, flooding and infrastructure failure), to identify the three key pillars of the Resilient Chicago program. The program also listed 50 actions in support of these pillars, designed to bolster the city’s resiliency.

Despite all of this work, in the wake of the recent announcement that funding from 100 Resilient Cities is winding down, the future of the Resilient Chicago initiative is now uncertain. But at least for the moment, Schaffer remains focused on what he feels is the most pressing task at hand: addressing the key, underlying disparities that cause challenges to Chicago’s most vulnerable residents, such as poverty rate, housing cost burden, and neighborhood flooding, among others.

“Chicago is fairly isolated in terms of climate change, compared to coastal cities that have to worry about sea levels rising. But flooding events are frequent here and if you think about those most affected, it is predominantly residents living in Chicago’s south and west side,” says Schaffer. “If you think about someone living below the poverty line when there is a flooding event, the decision facing that person’s household is: Do I remediate that basement flood, or do I put money towards paying my rent?”

To help make some of these more vulnerable neighborhoods more resistant to shock — whether economic or environmental — Schaffer says one of the potentially most transformative action items within the plan is the Neighborhood Opportunity Fund, first established as a separate initiative in 2016. Funds collected from downtown developers in return for higher density for their projects are being used to help small businesses set up shop in historically disadvantaged neighborhoods. The funding covers such costs as storefront buildouts, exterior repairs and plumbing and electrical work.

Schaffer says this sort of funding is designed to address one of the biggest barriers mom-and-pop businesses face when starting a new venture: access to capital. With over $20 million in the fund, the city is now considering other costs small businesses are burdened with. “We’re looking at a number of eligible expenses and how the funds can be used to ensure small business needs are met.”

Another goal of the program is to make the city’s transit-oriented development policies more equitable. Here, the city is literally trying to get away from a linear way of thinking.

“It’s a fact that rail doesn’t serve every community to the same degree [as bus],” says Schaffer. Some of the city’s bus routes have ridership levels higher than some El lines, so it makes sense to broaden the traditional rail-centric approach to transit-oriented development to include bus routes. The city plans to incentivize development along high ridership bus corridors as part of an Equitable Transit Oriented Development Plan.

While the underlying goal of this plan is to address neighborhood disparities, Schaffer admits there are no guarantees that builders will come. Even with a transit-oriented development policy around rail stations, “certainly not every rail station had transit oriented development emerging around it. But I think that with the bus lines and high ridership within the corridors that we’ve selected in our planning process, we do feel more development can be brought in.”

Dr. Noah Toly, director of the Center for Urban Engagement at Wheaton College, uses a pizza analogy to describe both the challenges and opportunities of making Chicago more resilient.

“The city needs to adopt a place-based approach [to strengthening neighborhoods] and to do that, it’s a bit like pizza. … Every slice has to have all of the parts … a crust, the sauce, the cheese and the toppings,” observes Toly. “So it’s not like in one neighborhood you can have the crust and another one you have the sauce. The strategy has to include actions that lead to each neighborhood being an integral home unto itself.”

“If you’re not ensuring each neighborhood is growing across those realms … if you have to leave your neighborhood because there may be plenty of arts, but absolutely no jobs, that’s a problem,” says Toly.

When Resilient Chicago was formally announced earlier this year by outgoing mayor Rahm Emanuel, it caused hardly a ripple with the media, with no major media sources within the city picking up the story; nor have any of these outlets covered the story since then. Part of this could be due to the fact the mayoral election took place in February as well. Another could be tied to the perception that Resilient Chicago was an Emanuel initiative, leaving one to wonder whether incoming mayor Lori Lightfoot will embrace the program with as much enthusiasm.

However Schaffer says the idea Resilient Chicago is solely a Rahm Emanuel project couldn’t be further from the truth. “This is a strategy that was formed and developed by the city that reflects the culmination of a lot of planning. That isn’t to say that priorities won’t shift or that it doesn’t need to continue to evolve over time. But we expect the new mayor will be thinking dynamically about how urban resiliency can be carried forward under her leadership.”

From Toly’s vantage point, these groups need to continue to play a vital role in helping the city to bridge the gap between neighborhoods. “I was very happy to see the steering committee include organizations from every part of the city. But now the city needs to leverage those partnerships and have strong neighborhood goals down to every block so that everyone benefits. Otherwise the city’s inclusive growth goals will not be achieved.”

Far from taking the success of Resilient Chicago for granted, Schaffer is upfront about the challenges that lie ahead. “We won’t have success unless the experience of the most vulnerable residents in the city is improved over time. That is obviously the baseline, but also probably one of the more challenging things to measure. In the interim, what we can do is hold the folks accountable who have committed to carrying out elements of the strategy, some of which are already in motion.”