Chicago’s New Planning Commissioner Says Hello to the South Side 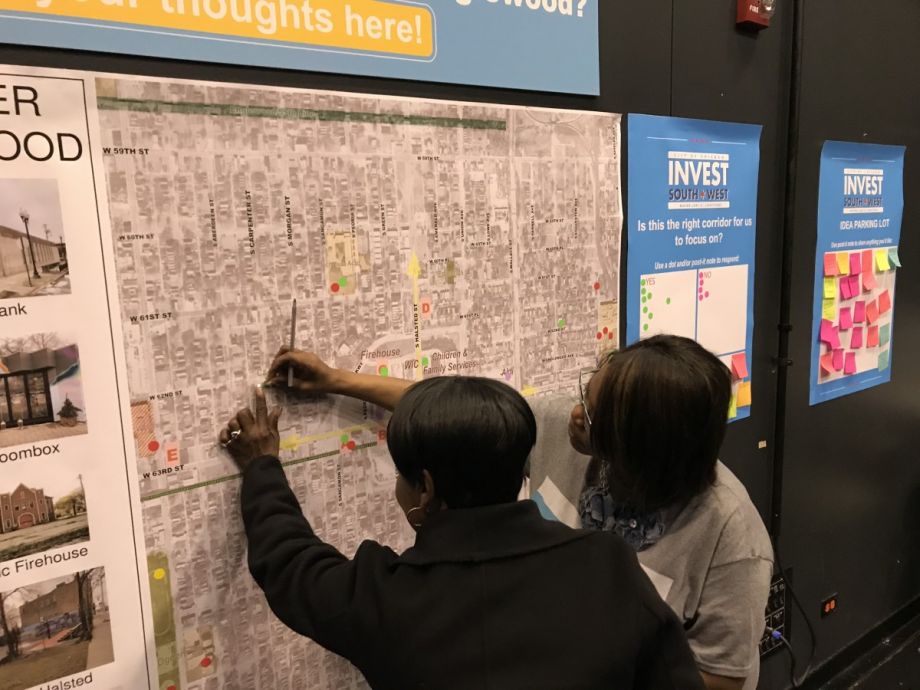 Residents give their input into what they want to see in Greater Englewood at a kickoff for a new Chicago initiative to bring dollars to historically underinvested communities. (Photo by Oscar Perry Abello)

Last Saturday, in the black box theater at Kennedy-King College on the South Side of Chicago, residents and city planners examined three giant maps on the walls — one of the Auburn-Gresham neighborhood, one of the New City neighborhood, and one of the surrounding Greater Englewood neighborhood.

At the Englewood map, coordinating planner Lisa Washington, who’s worked for 25 years at the Chicago Department of Planning and Development, was asking residents, “What buildings here have special meaning to you?”

It was a telling question to ask as part of the first of four local kickoff events for INVEST South/West, a new three-year initiative to bring $750 million and more in public resources to Chicago’s historically disinvested South Side and West Side. When cities announce they are bringing public dollars on a large scale to black and brown neighborhoods, the dollars often come with bulldozers to clear out vast swaths of once-thriving corridors that fell into disrepair as a result of redlining and absentee landlords. That had happened before here, as evident by the stretches of vacant land along the 63rd Street corridor where Kennedy-King sits.

The dollars were promised. The bulldozers came and went. Nothing came after.

On what was his 90th day on the job, Chicago Planning Commissioner Maurice Cox made it clear in a number of ways that he intends for Chicago’s neighborhoods to write a different story during his tenure.

“There are amazing buildings in our communities,” he said to an audience gathered for the kickoff event. “We believe that if we reinvest in them, we can get uses on those upper floors, remake ground floors and get businesses in those storefronts, and we can transform just the experience of walking down the street.”

Those buildings are already central to many of the plans upon plans already created for Chicago. Some Quality of Life Plans facilitated by LISC Chicago have already been through several updates. There are 23 community plans listed on the Chicago Department of Planning and Development website. The Chicago Metropolitan Agency for Planning has provided technical assistance for more than 200 local planning projects in and around Chicago.

One of the planning department’s goals with these local kickoff events is to affirm that all those plans are still relevant, as some of them are several years old by now. The problem in Chicago, Cox said on Saturday, is not a lack of planning, but a lack of coordination.

Rather than being proactive in coordinating city dollars across agencies, the planning department has been more reactive, mostly responding to developer applications for tax increment financing (TIF) dollars, other local subsidies, or zoning changes to clear the path for new luxury developments. The resulting pattern of development is as clear as it is predictable — the wealthier, mostly white North Side of Chicago has gotten wealthier while predominantly black and brown neighborhoods have watched their fortunes and populations fall.

“These two maps show what has happened to Chicago over the last 50 years, where the northern communities have gotten wealthier and richer, and the communities to the west and to the South Side have gotten poorer,” Cox said, pointing to the two maps showing economic change by neighborhood in Chicago.

Cox acknowledged that the lack of public investment on the South Side and West Side has helped drive out the middle class from those areas, making Chicago the only major city of its size in the country that is shrinking — and he acknowledged that people have many valid reasons for leaving.

“But I would contend that there are hundreds of thousands who have decided to stay, and they care deeply about the communities they live in,” Cox said. “I just want to make this very clear who we are doing this for, it’s for those who are here and those who plan to stay.”

The $750 million Cox was touting on Saturday isn’t new money. It consists of $250 million in TIF dollars and Neighborhood Opportunity Fund (NOF) dollars under his department’s purview. The NOF dollars come from developer fees collected from new developments in and around Chicago’s downtown, which started under previous Mayor Rahm Emanuel. The other $500 million represents infrastructure projects already planned and funded through other city departments and agencies, which will now be timed and coordinated to optimize alongside the planning department’s dollars.

Beyond those resources, Cox anticipates that private developers will follow on with their own investment.

It’s a gamble to expect private investors and developers to come in behind the public sector in such a coordinated, intentional way. There’s no guarantee that everyone with access to private capital will follow. If they do, there’s no guarantee that they will be interested in doing anything but maximizing profits, a move that would almost certainly lead to displacement of the low and moderate income households who have remained on the South Side and West Side of Chicago — especially as Illinois remains one of 37 states with a ban on rent control.

A few factors that have emerged over the past few years in Chicago could boost the odds for the kind of vision Cox put forth, where private investors or developers choose to participate in community development that centers existing residents while also attracting more people to the neighborhoods on the South Side and West Side.

The land bank, led by Robert Rose, set up its process to cater mostly to smaller and less experienced developers. Each property has to go through its own separate process — there’s no option to purchase a portfolio of multiple properties (although the land bank has occasionally bundled adjacent properties when someone expresses interest in one of them).

As others have reported, the land bank has made extensive efforts to market its properties directly to people who live nearby.

Even as the land bank has moved up into larger, mixed-use projects, it has been able to find and work with developers who have close ties to the neighborhoods around those properties.

Another factor that could tip the scales toward local private development on the South Side or West Side of Chicago is the Large Lots program, which has sold more than 1,200 vacant residential lots for $1 to residents or nonprofits on the same block as those lots. Those lots have been concentrated on the South Side and West Side of the city.

Not every resident has been able to invest heavily in those $1 lots yet. Some have chosen to maintain them as community gardens, some haven’t been able yet to access the capital to do more substantial development. Some might be interested in doing something more substantial if they knew the city was investing in other substantial public improvements around them.

“There is an amazing network of community partners already in place who have been working for years to lift these places up,” Cox said. “When we call a meeting, hundreds of people show up. That is an absolute requirement for the type of work we’re talking about doing.”

The community organizers in those neighborhoods are more than just connected to some of the hyper-local developers working with the land bank — in some cases they are literally the same people, like Asiaha Butler. Already the co-founder of the Residents Association of Greater Englewood, Butler also co-founded Englewood Development Group, which recently was awarded a property from the Cook County Land Bank Authority through the Chicago Neighborhood Rebuild pilot program.

Cox expects to rely on South Side and West Side community organizers to maintain a robust dialogue with his department over the next few years under INVEST South/West and beyond. His department is also restructuring and adding resources, bringing in seven new planners and splitting the city up into seven zones, dedicating a team of planners to each zone for the first time.

“All throughout the process, we are going to be coming back to communities to meet with them at their level, to constantly check that our strategies are in line [with their priorities],” Cox said.

There are plenty of factors working against locally oriented development on the South Side and West Side, and they’re no secret. There’s the constant headwind of redlining against aspiring black or brown homeowners, as well as small business redlining that keeps entrepreneurs of color from accessing capital to grow their businesses. Even for those that can access the capital, finding affordable space for a new or growing business can still be a challenge in Chicago.

There’s a long history of broken promises to the South Side and West Side, and Cox is coming to terms with that.

“Folks have heard promises before, and they’ve been let down before, so they have their guard up and have every reason to be skeptical,” he told me after the event.

Cox, and by extension new Mayor Lori Lightfoot, hope to win their trust through action. The city anticipates making the first announcements of projects funded under INVEST South/West in Spring 2020.