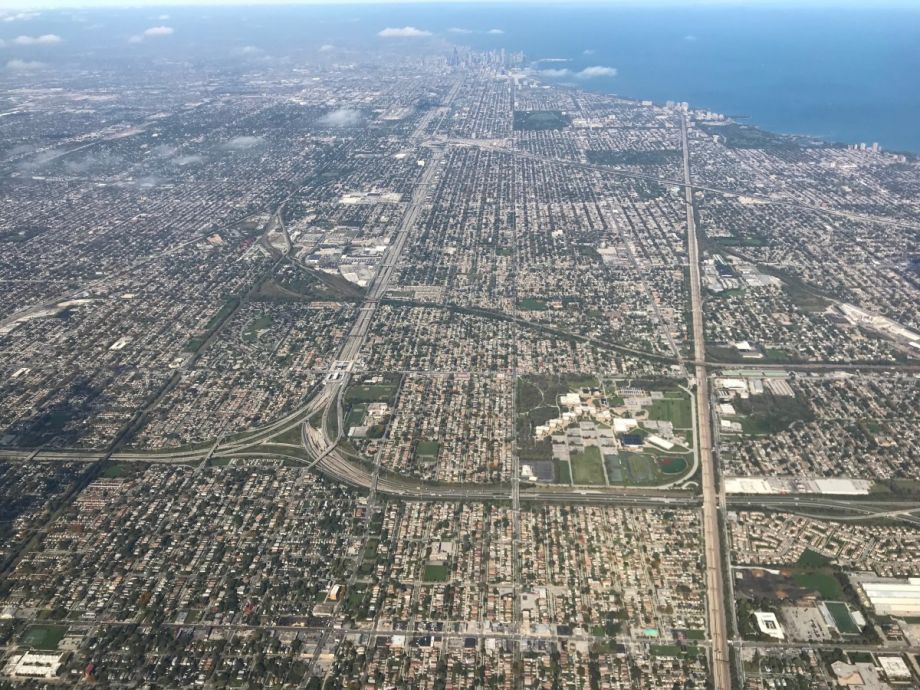 Located at the southwest corner of 63rd Street and S. Cottage Grove Avenue, beneath the terminus of the Chicago L’s Green Line, the Washington Park National Bank Building is a microcosm of the surrounding Woodlawn neighborhood, from its early prosperity followed by a long, slow period of disinvestment and decline. Constructed in the 1920s, by 2015 the building had been vacant for around forty years, with a tree growing through the roof, a flooded basement, and $3.7 million in delinquent property taxes. Maybe not a developer’s first choice of property. But the Cook County Land Bank Authority saw opportunity.

Every two years, the Cook County Scavenger Sale allows developers and others to acquire properties with three or more years of delinquent property taxes, provided they pay all of what’s previously owed to the county. Many properties, like this one, carry much more in back taxes than they’re worth on the market, scaring away any developer from going after them.

As a county agency, the land bank can submit a “no-cash” bid for the exact amount of taxes owed. Upon winning a bid, the land bank has the power to wipe out any back taxes and penalties owed before putting formerly delinquent properties back on the market. The land bank acquired the Washington Park National Bank Building through the 2015 Scavenger Sale.

“If someone wanted to, they could have bid $3.7 million and one dollars and they could’ve outbid us,” says Robert Rose, executive director of the land bank.

While it might be said that the land bank’s powers make for a nice clean slate, that’s not exactly true. Community members have plenty of hopes, dreams and visions for underutilized properties — which may not always line up with each other. The land bank took steps to try and reconcile all those visions with in order to shape its request-for-proposals to redevelop the building..

“It’s located at a very important intersection, within a neighborhood seeing a lot of investments and improvements, and the desire from the community to see something happen there had gotten to an all-time high pitch,” Rose says. “It really did feel like a perfect fit in terms of the tools that we have to get this property back online.”

Those tools are different for this parcel. Of the 1,100-plus properties it has acquired since 2013, the land bank has sold around 740 properties to developers for less than $150,000 each. At prices $150,000 or below, Cook County procurement rules don’t require a formal, public RFP — and the land bank has used that discretionary authority to work with developers who are from the areas where its properties are located, including new or less-experienced developers. Most of the properties in the land bank’s portfolio have been on the predominantly black south side or largely Hispanic west side of Chicago. Of the roughly 360 developers actively working with the land bank, 50 percent are black and 20 percent are Hispanic, according to Rose.

But the land bank determined it would offer the Washington Park National Bank Building for sale at $250,000 — setting the stage for an unprecedented, formal, public RFP process.

“The question then became how do we conduct that RFP in a way that’s consistent with how we’ve been making decisions with regard to distressed real estate,” Rose says. “For this project in particular, because there were so many possibilities for this building, it made sense for us to have a process that preceded the RFP so we could better understand what the possibilities would be for this location.”

To conduct a pre-RFP community engagement process, the land bank partnered with the Metropolitan Planning Council, which happens to have a ready-made process for site-specific planning that it offers to conduct for public agencies, called the Corridor Development Initiative. The council partners with the agencies free-of-charge. It’s done eight of these planning processes since 2010, including this one.

The process is designed to surface community needs and priorities and gradually move those needs and priorities toward one or more workable visions for development at a specific site, including some rough financial estimates. In one particularly crucial activity, participants in small groups create three-dimensional site plans using color-coded building blocks, each color representing a different use. Facilitators provide some guidelines — rough budget estimates, the building footprint, and how many stories are allowed. Community development finance professionals are on hand to help with back-of-the-napkin budget calculations.

In the case of the Washington Park National Bank Building, each small group also got to choose between reusing the existing structure or demolition and new construction, or could come up with multiple scenarios for either. More than a hundred people participated in the site planning activity for this building, with seven or eight people per small group. Fifty-four percent of participants were black, and 56 percent lived and/or worked in Woodlawn, according to the council’s polling of participants. Woodlawn overall is 84 percent black, with a median household income of $24,603.

Twenty different scenarios emerged from the site planning activity, according to the council’s final report, which further distilled those down to four scenarios — two for adaptive re-use and two for demolition and new construction.

Across all the scenarios, it was consistent that participants “didn’t want housing — they wanted commercial, something to bring some investment back into the community because of the commercial use of the property,” says Kendra Freeman, who leads Corridor Development Initiative work for the council.

The land bank made the Metropolitan Planning Council’s final Corridor Development Initiative report a prominent component of the RFP, while also expressing a strong preference for preserving the existing structure.

“[The land bank] really did a good job of centering the RFP around the priorities that came out of this report,” Freeman says.

The land bank also created a five-member selection committee specifically for this RFP process, including one resident from the neighborhood — “Something you typically do not see at all,” says Freeman. The other members included an architect with historic preservation experience, a developer, a real estate finance professional, and the chair of the land bank’s land transactions committee.

The land bank received four responses to the request for proposals, which Next City obtained by FOIA request. After preliminary vetting, the selection committee came down to two finalists, one proposal for preservation and one for demolition and new construction.

The preservation proposal came from a development team whose lead is David Christopher Lubin, who founded both University CoWork, a co-working space in Woodlawn, and Hyde Park Luxury, a luxury apartment and condo development firm. The proposal touts Lubin as a 15-year resident of Woodlawn who has connections to entrepreneurs from the neighborhood through the co-working space.

The new construction proposal is a joint venture, and one partner is Greenlining Realty USA, led by Woodlawn native Lamel McMorris. The proposal outlines Greenlining’s other ongoing work revitalizing vacant residential properties in Woodlawn for sale as affordable housing to low- and moderate-income households. The other joint venture partner is DL3 Realty, led by Leon Walker, who grew up in the nearby South Shore neighborhood.

The DL3/Greenlining proposal contained letters of support from multiple stakeholders, including Preservation of Affordable Housing (POAH) Chicago, which happens to control the northeast and southeast corners of the intersection where the bank property is located. As the proposal outlines, Walker’s firm is also redeveloping the building on the northwest corner of the intersection, and has been working closely with POAH Chicago to coordinate residential and commercial reinvestments in Woodlawn — including the newly-opened Jewel-Osco grocery a short walk up 63rd street.

The DL3/Greenlining proposal documents also included a statement from 1Woodlawn, a neighborhood group, informing its members that the DL3/Greenlining team was the only one to present its proposal to members of that group at a public meeting prior to submitting their proposal to the land bank. (1Woodlawn representatives were not available to comment in time for this story.)

For the sake of due diligence, the DL3/Greenlining joint venture proposal even included an estimate and floor plans for historic preservation of the building, which it estimated would push the development costs to $31.7 million, compared with $25.9 million for new construction.

In the end, the land bank selection committee voted unanimously to support the new construction proposal, to the surprise and dismay of those expecting the land bank to preserve the building.

“It’s unfair that communities on the South Side do not get to preserve historic buildings like they do on the North Side,” Jeanette Taylor said prior to her April 2019 election as alderman for the ward containing the building, according to the Chicago Sun-Times.

Rose hopes to work with newly-elected Alderman Taylor to convene a community meeting in the coming months to explain the decision-making process. There is still some flexibility on the final design and perhaps some of the existing facade could still be saved, according to Rose.

“I don’t think we had a chance to adequately explain to the community the thought process behind who we selected,” Rose says. “Going forward I think being able to close that loop, to have a meeting to say here’s the selection and here’s how we got there … we can be at least be very clear about how we reached our decision, and we can agree to disagree but at least you can understand how we got there.”

Rose hopes this project can at least set a precedent in terms of beginning community engagement before the RFP process to shape those RFPs for buildings of this size. The land bank bid on more than 9,000 parcels in the 2017 Scavenger Sale, and the 2019 Scavenger Scale is scheduled for July 2019.

“The whole point behind the RFP process is you want people to tell you what they want to do, to have clarity, but if it’s totally public people could change their bids in the process,” Rose says. “It presents a bit of a moral hazard if you’re proposing what you think will make people happy as opposed to what you think you could do.”