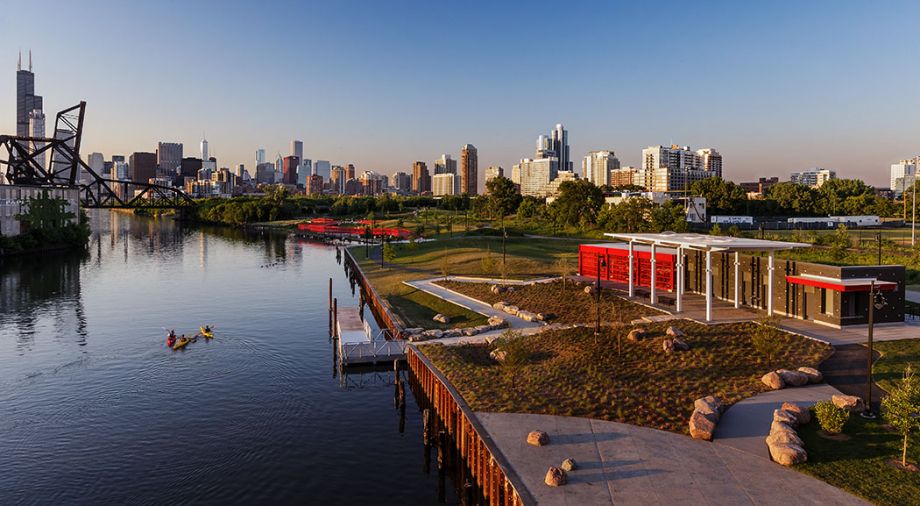 “The Chicago River is the city’s most neglected natural resource,” wrote urban planner Robert Cassidy in 1979 in Chicago magazine. “It is overshadowed by Lake Michigan, disdained by environmentalists and outdoorsmen alike, neglected, fouled, and abused by industry and by all the rest of us. Nonetheless, it is the second greatest gift that nature has bestowed on this city.”

After detailing how the “‘blue-collar’ waterway” that threads through the city and suburbs is actively harmed by pollution and negligence, Cassidy suggested that an umbrella group might look out for the complex river system. It prompted a bunch of phone calls to Cassidy: “Where can I sign up?” By October, the new Friends of the Chicago River had its first meeting, with about 100 people in attendance.

Since then, the Friends have worked to improve and protect the river at every level, from public policy to on-the-ground projects. Their efforts are about to get a boost from Great Rivers Chicago, the first comprehensive effort to develop a vision for the city’s river system.

“The Great Rivers project is a great example of how the river has been emerging as a great natural resource,” says Margaret Frisbie, the Friends executive director. “It’s the subject of big high-level conversation because it’s worth having.”

While Chicago is famous for its 27-mile Lake Michigan skyline, it is ultimately a city of rivers. The three that run through Chicago — the Calumet, the Chicago and the Des Plaines — create 157 miles of riverfront that touch 30 different urban neighborhoods.

Led by the Metropolitan Planning Council on behalf of the city of Chicago, and in partnership with Friends of the Chicago River, the plan was partly prompted by the alarm raised years ago about invasive Asian carp threatening Lake Michigan, which the rivers feed into. And because of the diversity of uses — from river boating to running in solace on a wooded trail to marina restaurants — it was important to look at all three rivers together to avoid repetitions and understand the scope of the watershed.

This comes alongside Chicago Mayor Rahm Emanuel’s announcement that placed mostly pre-existing plans to improve lakefront and riverside parks into a framework called “Building on Burnham,” a reference to Daniel Burnham’s 1909 “Plan of Chicago.” That includes the ongoing construction of the Riverwalk, the opening of a new boathouse in Bridgeport, a rails-to-trails project, and separately marked pathways for cyclists and joggers.

The downtown section of the Chicago River is of course the most well-known, a corridor thick with tour boats, water taxis, kayaks and, alongside the Riverwalk, cycling, walking, jogging and dining. But 172,742 residents also live within a quarter mile of a riverfront, and a full 17 million tons of cargo went through the Chicago river system in 2012. These hard-working rivers demand an unusually multifaceted planning strategy.

Josh Ellis, MPC director, says that the team’s 18-month process was boosted by $350,000 in initial grant funding, and reached about 5,500 Chicagoans at more than 95 group interviews and five regional public meetings. The group interviews were with stakeholders like the Chicago Housing Authority, the Field Museum, the Bridgeport neighborhood, and the Recovery on Water rowing team. Sessions weren’t all conducted on folding chairs in a gymnasium either. There was a ride with the Coast Guard, riverfront bike rides and birding field trips in the LaBagh Woods. Planners also loaded and offloaded barges alongside workers.

Chicagoans share their hopes for the river at a public meeting. (Credit: Metropolitan Planning Council)

Planners put together an advisory group that includes representatives from business, conservation groups, several units of government, “as well as unlikely folks like the YWCA,” Ellis says. The team also did a historical search for ideas for the rivers that never came to be, and examined why they went dormant. An online survey — where respondents were asked the same set of questions about different segments of the rivers — generated about 3,800 responses. The same five words kept coming up to describe the future respondents wanted to see: active, easy to get to, clean, exercise and parks. Ellis notes how only one of these describes a specific land use; the first three emphasize character.

The team also hosted design charrettes at specific locations, where local stakeholders, an architecture firm and public agencies came together to think through the space. What would the vision for the entire river system look like if it were manifested in that one location?

“We did our darndest with the time and resources available to us,” Ellis says. “We never said no. If in one meeting a tangent came up and someone said, ‘you should really talk to these folks,’ we went and met with them.”

One surprise: Newcomers to Chicago have a significantly different perception of the rivers than native residents “who have heard their entire lives that the rivers are dirty,” Ellis says.

And it’s true: The rivers were in rough shape for years. There were fewer than five fish species in the Chicago River in 1970, but thanks to conservation groups and changing public policy, that has improved. Seventy different species live in the river today.

“So this discussion was very informative,” Ellis says. A lot of things people want to do with the rivers are things they already can do — but they don’t know about them, and resources are concentrated on downtown.

“I’ve been inspired to hear people speak about the river with passion and excitement,” Frisbie says about the planning process. At the same time, though, “I’m equally daunted by the number of people who still had associations with the river that are negative as opposed to hopeful. … A number of people were still like, ‘Ew.’”

There is an opportunity, then, to generate exponentially more engagement. “Some of that is a community issue, and getting more people involved,” Ellis says, “and some of that is bringing information to them where they’re interacting with the rivers. There are no signs about water quality or history or anything, no information at all.” With 2.2 million people crossing over a river each day, there are a lot of opportunities to make an impression.

What Frisbie hopes comes through in the final document “is that the river is alive and full of wildlife, and needs to be able to support wildlife, both in the water and on the banks,” she says. “It’s not just about humans. If we lose water quality and habitat, we lose the inherent value of a natural resource.”

As it happens, most of the pollution concerns that came up focused on litter, rather than toxic chemicals. Great Rivers Chicago is also alert to problems caused by sewer overflows in the river, and is looking at long-term solutions in green and gray infrastructure to help mediate it.

Ellis also thought that people would want to see the city transition away from its industrial riverfront, but it actually turned out to be the opposite. “A lot of folks recognize that the rivers are attractive, yes, and that a lot of what we currently think of as industry — breweries, digital manufacturing, 3D printing — is industry that’s wholly compatible with a riverfront habitat.”

MPC is currently at work distilling all this into a vision and action agenda that’s expected to be released this summer. “We really felt the need to show that the vision we’re assembling is not one we came up with, but one we wrote down,” Ellis says. But already, the team is eyeing implementation strategies for modest recommendations that can be completed by 2020, and more ambitious ones slated for 2030 and 2040 timetables.

Implementation demands the same kind of community involvement that the planning process initiated. Ellis notes that there are 50 existing riverfront parks in Chicago, but only 15 park advisory councils. Supporting more volunteer groups of neighborhood stewards will help transform the riverfront into a cleaner and more engaged public space, and also serve as the community voice for the park.

And if they are anything like the Friends group, they’ll be in it for the long haul.

“Chicago is at the forefront of river recovery and renaissance,” Frisbie says. “It’s very exciting.” The Friends group is seeing through Great Rivers Chicago, and simultaneously looking beyond it. “We’re here to do this forever.”