A Floating Bike Path Could Be Coming to Chicago River 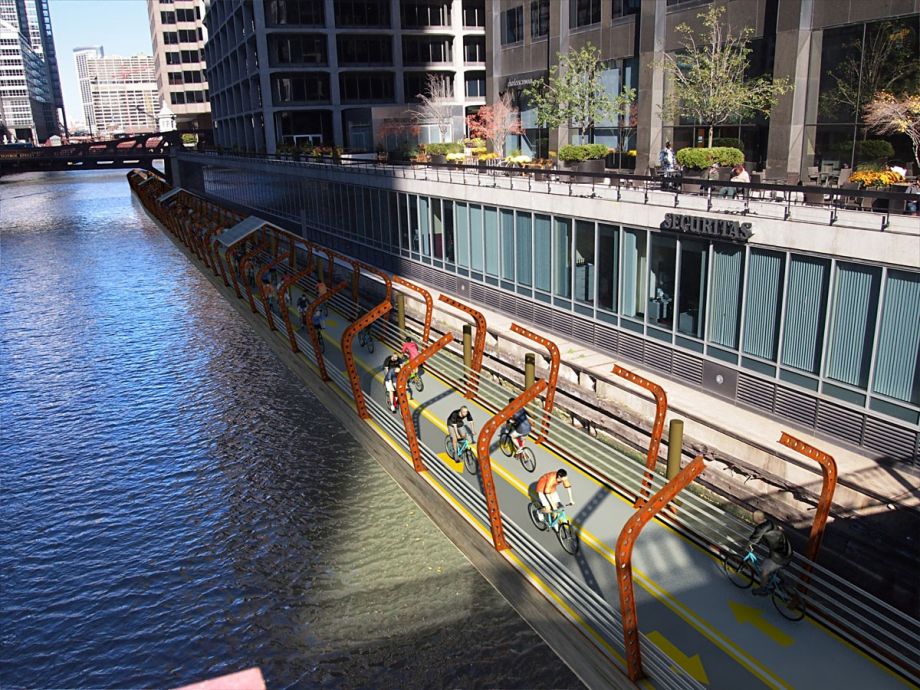 Chicago has been turning its attention lately to its second waterfront: the Chicago River. The city recently released a sweeping plan to increase recreation and access, expand transportation potential and preserve the river’s role as an economic driver.

A group of Chicago architects and designers have a plan they say fits right into this vision for the river — a series of floating, connected bike paths that would connect parts of the city’s disjointed bike infrastructure and help revitalize the underutilized waterway.

The proposal — dubbed RiverRide — was developed by architecture firm Second Shore. The floating paths would be made up of 82-foot-long, 12-foot-wide, steel-reinforced concrete pontoon segments developed by Marinetek. The segments would be anchored into the riverbed with pilings and have precipitation-activated awnings for rainy weather, and solar-powered lighting for night rides.

Second Shore’s proposed network of segments would stretch from bike paths in Ping Tom Park in Chinatown to Horner Park in Ravenswood. They estimate that the project would cost $5 million to $10 million per mile.

Second Shore designer James Chuck told Chicago Inno that the geography of Chicago and the river lend themselves well to the floating paths.

“The river runs through so many neighborhoods north and south which developed around the river when it was the main commercial artery through the city,” Chuck told Chicago Inno. “Chicago’s economic activity is highly centralized in the central business district, which is served by all three branches of the river, and means that people need to get to/from it nearly everyday.”

Second Shore has been developing the proposal since 2012 and recently presented it to the 33rd Ward Transportation Action Committee. If the city approves the project, it will be managed by the Chicago Department of Transportation. Pilot projects would pop up in spring and summer of 2018, and the full project could be implemented as soon as summer 2019.