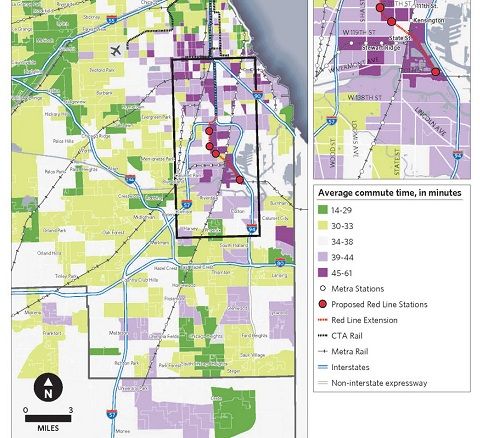 City leaders like to envision future subway lines improving quality of life for area residents. But such hopes are rarely put convincingly to paper. Now that may be set to change.

The new study from the Chicago Metropolitan Agency for Planning (CMAP), which works with municipalities to foster sustainable growth, hopes to attract federal funding for a five-mile extension of the Chicago Transit Authority’s Red Line.

CMAP executive director Randy Blankenhorn says the Red Line proposal has been kicking around for decades, but has recently gained momentum. Over the past year, his organization interviewed locals, held focus groups and pored over reams of regional data to compile their report.

It argues that the extension, adding four stations from the current terminus at 95th Street to 130th Street, would shorten commutes, create jobs and spark broader economic growth in Greater Roseland.

The far South Side community is among the city’s poorest and most remote — nearly twice as far from the City’s Loop as the University of Chicago, and connected by neither commuter nor elevated train, unlike the Hyde Park area.

Schools are low performing and few residents own cars. Commutes into the city require a bus ride plus a train transfer and often take two hours or longer. According to CMAP, the extension would place many important areas of the city within a one-hour commute, a standard measurement of accessibility.

The report estimates that extending the Red Line to 130th Street would give Greater Roseland residents access to 56 percent more jobs, in areas like the near North Side and Midway Airport, 38 percent more educational institutions, such as the University of Illinois-Chicago, and 64 percent more medical facilities, like Rush University Medical Center.

The new stations would also boost dozens of local businesses.

“What we wanted to do is get the community involved in thinking about what kind of a difference this kind of transit investment makes,” said Blankenhorn.

In an email, Steven Vance, who blogs about local transit issues at Grid Chicago, said the report “does an amazing job describing all the benefits that the community of Greater Roseland will experience when the project is built, as well as tying them to the federal government’s six livability principles.”

“We believe this may be the first time that anybody has used them around a transit proposal,” said Blankenhorn. “We think it’s the right thing to do and we hope it’s taken up not just here but around the country as a way to look at these transit infrastructure projects and their impacts beyond just the station, the track and the cars.”

Along with the report, a summary and video, the CMAP website features a gallery of maps detailing the various impacts of the proposed extension. All these elements, plus the analysis of economic impact, job access, property values and more, make the CMAP report one of the more ambitious transit reports yet.

Blankenhorn hopes it bolsters the CTA’s pursuit of federal New Starts funding. That goal may be boosted by the fact that Altgeld Gardens, where President Obama worked as a community organizer a quarter-century ago, is within the area served by the extension.

To supporters like Vance, the $1.5 billion price tag sounds high. Though it fits in with the recent surge in the cost of major transit projects, it’s more than the CTA spends in an entire year.

Earlier this week, the city’s transit board approved the CTA’s $1.39 billion 2013 budget. The new financial plan follows the elimination of a dozen bus routes and monthly and weekly fare increases intended to eliminate a projected $165 million deficit.

Considering the lack of funds locally and nationally, the Red Line extension is unlikely to attract adequate funding for some time, leaving locals struggling with a sluggish economy and endless commutes.

“There’s not the kind of money there used to be for transportation infrastructure,” said Blankenhorn. “But there is some. This positions us so that when New Start money is available, we can be competitive.”

A freelance journalist and editor based in Istanbul, David Lepeska writes about Islam, technology, media, and cities and sustainability, and has contributed to The New York Times, The Economist, The Financial Times, The Guardian, Metropolis, Monocle, The Atlantic Cities and other outlets.