Chicago Prepares to Unclog a Transit Bottleneck – Next City 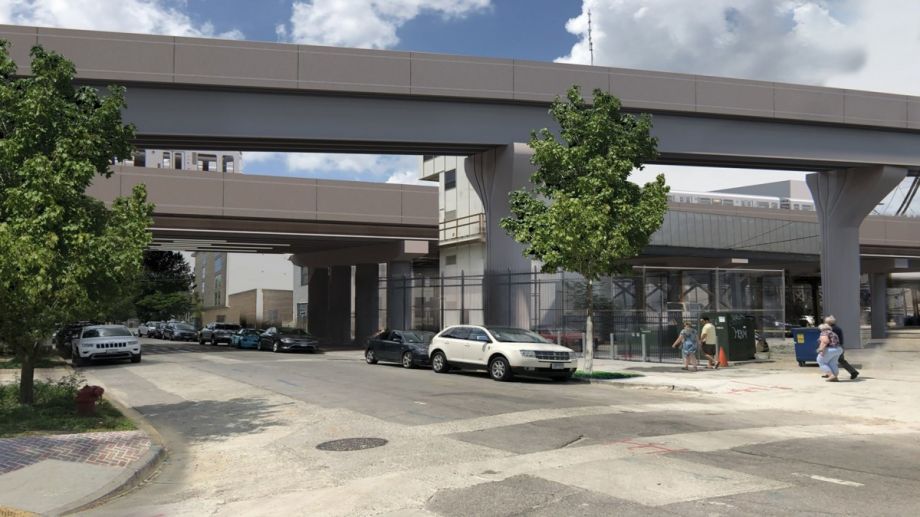 A rendering of the Red-Purple bypass (CTA)

Chicago’s Loop Elevated will always be with us: It’s a National Historic Landmark, and whatever plans the City of Chicago may once have had to replace it with subways have long since been permanently shelved. So Chicago transit patrons can expect to have to wait while trains clear grade crossings downtown for as far as anyone can see. But that doesn’t mean the Chicago Transit Authority can do nothing to remove choke points on its sprawling rapid transit system.

One of the biggest choke points, in fact, is set to disappear in a few years.

The Chicago Tribune reports that work will begin this fall on the largest modernization project in CTA history, a $2.1 billion reconstruction project that goes by the name of Red-Purple Modernization (RPM). The overall project, which will take a total of four years to complete, will modernize the signaling and train controls and rebuild four stations on the North Side elevated, on which Red, Purple and Brown line trains operate.

But the first and biggest project will rebuild the junction where the Brown Line meets the other two. Called the “Red-Purple Bypass” and also known informally as the Belmont Flyover, this reconstruction project will remove the 112-year-old series of at-grade switches northbound Brown Line trains must negotiate to reach the viaduct that takes them to Ravenswood.

In place of the at-grade crossings, the project will construct a flyover ramp from the northbound local track at Belmont that crosses over the other three tracks. At the same time, the four-track main viaduct leading into Belmont from the north will also be rebuilt to remove curves.

This project has generated some controversy in Chicago’s Lakeview neighborhood because of the flyover’s height — it will rise about four stories above the low-rise district — and because constructing it will take out 16 existing buildings. But when this first phase of the project wraps up, Red and Purple line trains will no longer have to stop and wait while northbound Brown Line trains pick their way through the switches. This, in turn, will improve operating speeds and allow more trains per hour to run on the two lines.

“It’s not just a North Side issue,” said Chris Bushell, the CTA’s vice president for infrastructure. “It will improve capacity throughout the whole system.”

A CTA video showing how the bypass will work.

While the CTA waits for the necessary permits to begin work, the agency is meeting with Lakeview residents to prepare them for the work to come. Service on all three lines will continue during construction, though the Red and Purple lines will be reduced to two tracks between Belmont and Newport Avenue.

Another, more local, benefit: The new main viaduct will have a closed concrete roadbed, which will cut down on noise as the trains cross over local streets.

The flyover and viaduct reconstruction should be completed by the winter of 2024. The remainder of the modernization project should finish in 2025.

The eight-car trainsets are being built at CRRC Nanjing Puzhen. Equipped with propulsion and control systems supplied by Bombardier under the terms of a 2018 joint venture with Shanghai Shentong Metro Group, the trains will provide service on the new Line 14, a 38.5-km (23.9-mile), 31-station east-west route designed to ease overcrowding on parallel Line 2. Line 14 is the first metro line in Shanghai built for fully automated operation. The line is expected to open for service at the end of 2020.

The Los Angeles County Metropolitan Transportation Authority will, according to a news story in Railway Age, finish a 10-month-long end-to-end rebuild of its oldest rail transit line next month.

The 10-month, $350 million project replaced tracks, upgraded train control and power supply systems, and installed four new crossover switches on the 22-mile-long Blue Line, which connects downtown Los Angeles with Long Beach. The Blue Line was shut down in sections while reconstruction took place, with shuttle buses providing replacement services. The line’s southern half was shut down from January through the end of May. While the northern half required more work than the southern half, its shutdown will have lasted the exact same length of time — five months.

The reconstruction keeps the Blue Line in a state of good repair while the four additional crossovers will reduce service interruptions for riders.

“We are proud of this critically needed repair work to make the Blue Line better and more reliable for Metro customers,” Inglewood Mayor and Metro Board Chair James T. Butts told Railway Age. “Our customers will see for themselves just how much effort we’ve put into improving their transit riding experience.”