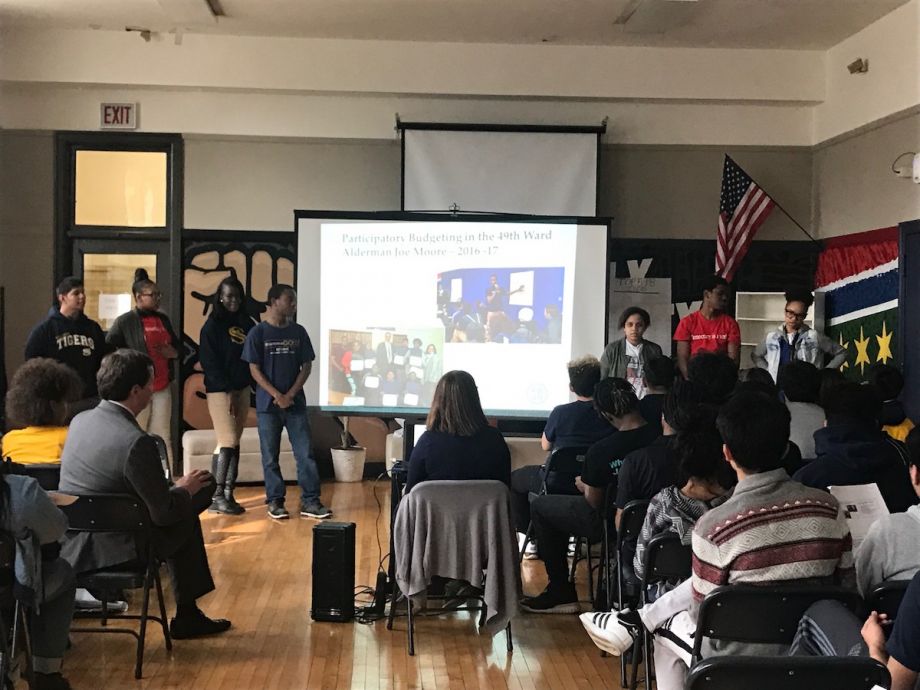 Public funds are a hot-button issue in Chicago, a city that has historically funded public services, such as education and mental health, inequitably. However, one Chicago community has been not only democratizing public budgeting, but also getting young people involved in the process.

The 49th Ward, a political district represented by Alderman Joe Moore in Chicago’s North Side, was the first in the city to introduce participatory budgeting. Used around the world, the practice typically involves a city’s residents proposing and voting on projects funded by public money. New York City won an award for its participatory budgeting efforts, and Oakland recently applied the process to decision making about federal grant money.

The structure varies in each city (and within cities), but engaged communities will generally have a leadership committee. In Chicago, such a committee collaborated with the alderman to put a call out for participation. Residents get together to identify community needs and then collaboratively direct local spending toward projects that address those needs.

There are no age or documentation restrictions to getting involved, but only youth ages 16 and older can vote. Maria Hadden, a project manager with the national Participatory Budgeting Project, says the process is more accessible than other civic engagement. Adults want to make space for young people in the projects, she adds, and youth in the community see themselves as “civic consumers” since they attend publicly funded schools and pay taxes at stores. “Civics shouldn’t just be connected to reaching the voting age,” Hadden explains.

For the past four years, the 49th Ward’s public budgeting committee has been working directly with a group of 15 students from Sullivan High School, a community school in the Rogers Park neighborhood. To fulfill the school mandate of involving youth in community politics, the students have been developing and proposing projects for PB funding cycles.

Ajah Plummer, a 17-year-old junior at Sullivan, says that through her involvement she has gained the skills to present in front of a large crowd without getting nervous or feeling like people won’t listen. She says her peers should have equal footing with adults, even if they feel nervous. “Young people should be able to vote on things that affect them,” she says.

Karl Jones, 18 and a senior at Sullivan, says he never felt connected to his community prior to participatory budgeting. “My perspective and life changed,” he says. “I feel like I understand what a democracy should look like.”

One of the people guiding those youth has been Jorge Pule, 25, a youth mentor at the civic engagement organization Mikva Challenge. Pule says all 50 aldermen in Chicago should use PB and involve young people. “This gives them opportunity to research and propose solutions for community-wide issues,” he says.

Pule says his group, made up of black and Latino students from Sullivan High School, represents the diversity of Rogers Park. Last year, the group successfully won the community’s votes to add bus stop benches along major bus routes near the school, and to also add street and alley lights around Sullivan and Kilmer Elementary.

Chicago aldermen have a history of using some funds, called “menu money,” to grease the engine of the patronage machine that kept them in office. Cash has been funneled into construction contracts and projects managed by political allies.

There’s $1.3 million in menu money doled out annually by the city to each of the 50 wards. Currently, nine wards are using participatory budgeting to direct that money, according to Hadden.

The menu money has some strings attached. Due to restrictions stemming from the source of the funds — an annual $66 million in general bonds — proposals are limited to infrastructure projects such as installing crosswalk signs or renovating playgrounds. Projects can only be constructed on public land or inside public property. They have to be long-lasting, brick-and-mortar ideas like street resurfacing that can last 10 years or more.

Infrastructure projects cost a lot of course. Hadden says street resurfacing for the average size neighborhood block in Chicago can hover above $70,000. The Chicago Department of Transportation assists residents in identifying which streets are most in need of repair based on a city rating system. Still, the process leaves residents feeling like the money is not enough to spread around. “Now they have this money and they want to decide how it’s being used,” Hadden says. Such is the messiness of democratization.

At its core, participatory budgeting is about radical inclusion. Hadden sees it as contributing to “redesigning democracy” by engaging historically marginalized people and removing the old barriers to participation. “The city should be interested in this group of thousands of people who have these civic skills,” she says, noting how residents who’ve participated can go on to add value to other community institutions, local school councils or park advisory boards. “We can prove this is a valuable process no matter what money is attached.”

Martín Xavi Macías is a multimedia journalist and digital media educator. He was born and raised in Chicago. His reporting has appeared in Yes Magazine, Chicago Magazine, Truthout, National Public Radio and other outlets. He has a master's in journalism from Columbia College.

Follow Martín Xavi .(JavaScript must be enabled to view this email address)