Chicago Professors Want Residents to Know What’s in Their Soil 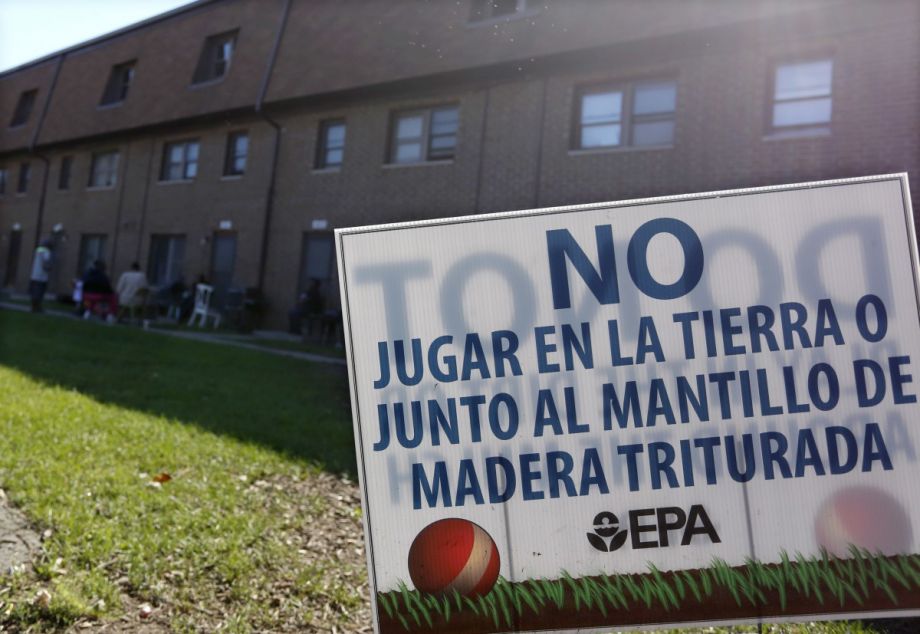 A sign from the Environmental Protection Agency in front of West Calumet Housing Complex houses in East Chicago, Indiana, warns people not to play in the dirt. The EPA detected high levels of lead in samples of dust and dirt tracked inside homes where soil is tainted with industrial contaminants. (AP Photo/Tae-Gyun Kim)

When James Montgomery’s students told him they wanted to start mapping lead in soil, the DePaul University environmental studies professor was open to the idea.

“Now,” he says, six years later, “it’s probably going to be the focus of my research for the rest of my career.”

In 2011, high lead levels had not yet been detected in Flint, Michigan’s drinking water. Nor had residents living in East Chicago, Indiana, been relocated from a lead-contaminated Superfund site or cautioned about the lead in their drinking water. But as these incidents gained national media attention, Montgomery’s research became more salient.

He and a group of students began by collecting soil samples from over 120 homes in Chicago. They found that the closer homes were to highways, the L or former industrial sites, the higher the lead levels were. Montgomery says this is typical of urban areas. Lead exposure goes beyond just paint and piping. A lot of the lead in the environment is from gasoline that was once leaded and would go into the air as an aerosol and then rain out into the soil.

“Everybody tends to talk about lead in water,” says Montgomery, “but there’s been little attention to lead in soil.”

Montgomery and his team began in the city’s affluent Lincoln Park neighborhood, out of convenience. DePaul’s campus is there. He’s quick to point out that lead contamination does not discriminate based on socioeconomic status. Lincoln Park borders a former manufacturing district whose historically heavy industrial use makes it a likely culprit for lead runoff. Montgomery says his team found levels in some multimillion-dollar homes with lead concentrations of 3,000 parts per million; the EPA threshold for children’s play lots is 400 ppm, and for other areas, 1,200 ppm.

After running the tests there, it became clear that soil analysis and lead awareness needed to happen elsewhere too. Montgomery says some homeowners he spoke with in Lincoln Park, where the median home value is $449,000, didn’t want their soil to be tested, or they agreed to be tested, but didn’t want to know the results for fear of reducing their property value. Plus, going door to door is pretty labor intensive for a comprehensive mapping effort and awareness campaign.

Montgomery and his colleague, Julia Lippert, set out to reach other communities.

Most recently, they partnered with Build Chicago, which works with gang-affiliated youth on Chicago’s West and South sides. They invited residents to bring soil samples to a health fair at Build Chicago’s Family Night to have them tested for lead levels.

During the effort, which was modeled after the Agency for Toxic Substances and Disease Registry’s Soil Shop program, Montgomery, Lippert and a team of community educators tested residents’ soil and water, and administered surveys to get a sense of how much awareness there was surrounding soil contamination. Of the 26 soil samples analyzed during the health fair, four of them tested above the level of concern. The majority of survey respondents reported poor knowledge on how to respond to health concerns associated with lead contamination in soil.

While a small start, Montgomery says the community health fair is the right model for raising awareness about lead in soil.

“Logistically it makes good sense. They have the facilities to do the testing, and the relationships with the residents,” says Montgomery. “That’s been the biggest stumbling block: getting the word out.”

If he could, Montgomery would work with larger public entities to test levels in playgrounds, schools or housing agencies that subsidize rental homes. Montgomery fears that, much like homeowners who don’t want to face the reality of potentially high lead levels, the city’s attitude is much the same.

Chicago’s dedication to lead remediation or contamination prevention has been scant of late. Federal guidelines require that 50 homes be tested for lead every three years. Per reports on the most recent round of testing, only three of the 50 homes visited were in areas where the water lines had been replaced in the last five years — even though federal studies have shown that agitation of lead piping makes it more likely to leach into water. And for an overhaul of the city’s water system, Chicago Mayor Rahm Emanuel dedicated no funding to the replacement of lead pipes.

Montgomery says he plans to continue seeking municipal support for the project, and to make it more palatable, he’ll try pitching it as overall soil fertility testing, not just lead. In the meantime, he and Lippert have reached out to the Chicago YMCA in hopes of planning future health fairs at Ys throughout the city.

While Montgomery and his team are still mapping and educating, and not yet drawing conclusions from the patterns, their maps could offer a blueprint for further research, as similar efforts have elsewhere. In New Orleans, Tulane University’s Howard Mielke is at the forefront of lead contamination research and has extensively mapped the distribution of lead pre- and post-Hurricane Katrina. His research links increased lead levels with fetal mortality, dementia and increased crime.

Correction: A previous version of this article misidentified James Montgomery’s DePaul University colleague. Her name is Julia Lippert. Also, Montgomery has analyzed over 120 soil samples from homes all over Chicago; the original article indicated they were all from one neighborhood.