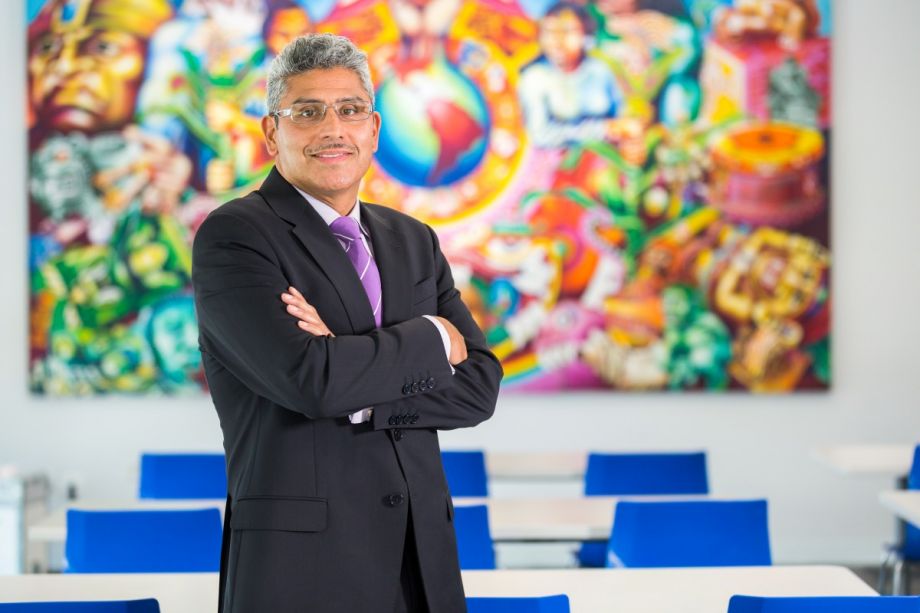 “Changing policy requires changing mind-sets. It requires seeing human beings in different ways,” says Juan Salgado. “Part of being effective in this work is understanding that you have to change the mind-set of others as it relates to your community and the population you’re serving before you can even think about changing policy.”

Salgado has been president since 2001 of Instituto del Progreso Latino, a community organization that works on the South, Southwest and West sides of Chicago to provide education, training and employment that fosters an inclusive economy and society. He is one of this year’s MacArthur “genius grant” recipients.

Though Instituto is a Latino organization, and it does serve mostly the Latino immigrant community, Salgado notes that through their main manufacturing jobs program, nearly half of successful placements have gone to African-American workers.

Given Chicago’s well-documented history of manufacturing decline, you might be surprised that a manufacturing jobs program is what put Instituto on the map when it came to changing policies and systems. Even more remarkable was its path to systemic change.

“Because of Chicago’s history of manufacturing job loses, during most of [previous] Mayor Daley’s tenure, when he’d talk about manufacturing, it would be something to the order of ‘it’s important but it’s decaying.’”

Instituto was one of a small chorus that stuck it out, continuing to work at placing previously low-wage workers into better-paying jobs at small local manufacturing companies.

As part of a deal to build a new supplier park for Ford Motor Company, according to Salgado, Mayor Daley convinced Ford to put out a call for community groups to help fill some of the skilled manufacturing positions at the new park. Instituto was one of them.

But there was one big problem. “It was a performance-based contract,” Salgado says. “You only got paid if you got the people in the jobs. And Instituto, we had no money. But we knew we could do this. So we mortgaged our building to get the cash.”

The building was Instituto’s only financial asset at the time. The mortgage was for around half a million dollars.

“We had a lot on the line. We worked our tails off. Long story short we blew the thing out of the park,” Salgado says. They got 470 of the 600 total placements in the joint contract with three other community organizations.

The program has evolved into the county-funded go-to center for any company interested in hiring skilled manufacturing workers in Chicago or anyone interested in getting on that career path. In their worst year yet, the program got about 300 placements; in their best, they got around 700. Overall, they’ve placed more than 3,200 community members with over 700 different employers.

Instituto has since taken lessons from that experience as well as the vision for long-term, systemic change into the healthcare field, where J.P. Morgan forecasts more than 14,000 middle-skilled job openings in Chicago from 2014 to 2019.

They focus mostly on nursing, where much of that job growth is, and which has an evolving but somewhat well-developed career ladder, starting from the certified nursing assistant (CNA), to licensed professional nurse (LPN), to registered nurse (RN) and eventually up to nurse practitioner (NP).

Instituto’s healthcare careers ladder program started out with just seven students in the LPN program at a community college.

“Our philosophy is all of our students will enter college with no remediation required. It’s a key thing because so many students, especially immigrants, by and large they never make it to the credit-bearing side,” Salgado says.

To get them to that stage, length of time varies depending on how much schooling any given community member had previously, but Salgado estimates they get about two years of learning into a single semester. Students come for classes five days a week, from 5 to 10 o’clock in the evening. Instituto runs after-school programs for kids ages three years old all the way up to teenagers.

“You can literally come with all your kids,” Salgado says.

They provide healthy meals for children of parents in their programs, through a partnership with Greater Chicago Food Depository.

“So the parent that’s in a nursing program doesn’t have to worry about coming home to cook, or stop by McDonald’s to feed the kids,” Salgado says. “They get a healthy nutritious meal and we provide additional support to the kids themselves to keep them progressing academically and socially.”

“Another thing that happens is people don’t do the family budget and they end up dropping out of college classes in order to work a little more for a while and then come back,” Salgado says. “But they rarely come back.”

Tutoring continues even after students have completed enough classes to get to the next level. Instituto does test prep for licensure exams, for instance.

“We never detach until people are safely in their careers,” Salgado says.

The program is now 10 years old.

“We’ve had 500 people complete the accelerated program to get them college ready. There’s another 200 in the process. We’re on our way to having 1,000 people in the near future that have totally transformed their lives because they’ve gone from minimum wage or no job to earning $24 to $36 an hour and being successful in college,” Salgado says.

That kind of success once more led to systemic change.

When Instituto started the healthcare career ladder work, it was almost entirely funded by private foundation money. It was partly a practical decision, Salgado says, given the relative flexibility of foundation funding, especially when it’s from small, local foundations. It was also because they really had no other option.

“We couldn’t get public dollars to actually do the work,” Salgado says. “The system basically said, the rules weren’t written that way. We had to partner with the philanthropic community to question and redirect the way the workforce system and the community college system were thinking about how to do this kind of work.”

Since they’ve shown it can be done, Instituto’s healthcare careers ladder work is now 50/50 private and public funding. One of the newest public funding sources for this work, the Federal Workforce Innovation and Opportunity Act, has Instituto’s fingerprints all over it. The U.S. Department of Education features Instituto in its roadshows to raise awareness of the kind of programs the act seeks to support.

The beauty of this kind of systemic change is that there is a role for everyone. For large corporations or big healthcare institutions hiring skilled workers from marginalized communities. For federal and state governments looking to support those communities with workforce development programs that have a proven track record.

And for smaller, community organizations with a laser-focus on providing the multi-dimensional, perpetually flexible support that today’s marginalized communities need to be the foundation of tomorrow’s inclusive economy.

“People often look at institutions like ours, and they don’t appreciate the possibilities, they don’t necessarily see the total upside,” Salgado says. “As if just being bigger always means being better.”