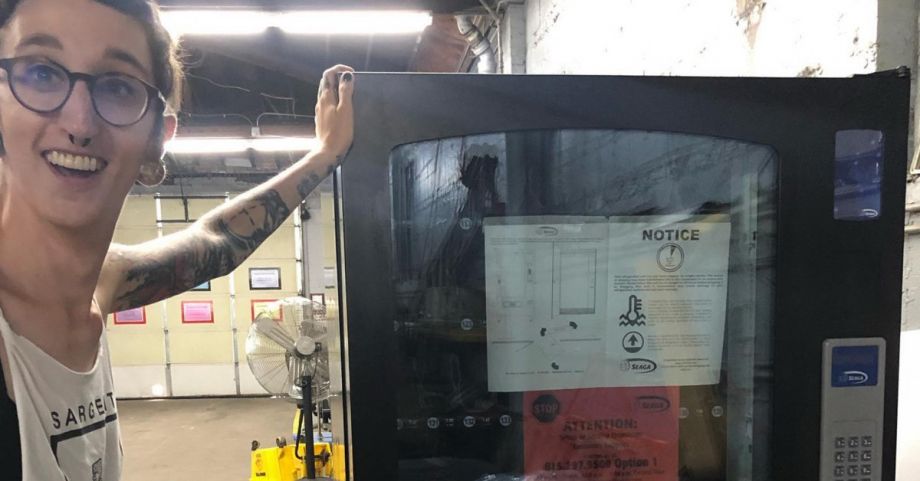 In response, harm reduction advocates have been taking action. Inspired by a similar program in Las Vegas, Chicago Recovery Alliance, a non-profit harm reduction organization who provide syringe exchange and overdose prevention services, had been toying with the idea of putting up vending machines offering naloxone and safer use supplies for a long time. Dan Bigg, the alliance’s founder, used to talk about it regularly before his death in 2018, according to Karen Bigg, Chicago Recovery Alliance’s director of community relationships.

In response to the Covid-19 pandemic, and the uptick in overdose rates, CRA has acquired four vending machines that will allow people who use drugs to get naloxone, which reverses the effects of an opioid overdose, for free and at their convenience.

“We get calls at all times of day and we don’t have the resources out there to be running around 24 hours,” says Bigg.

At least where naloxone is concerned, a bill signed into law by Illinois Gov. J.B. Pritzker in August of 2019 made the vending machine project possible without much legal wrangling. Previously, syringe exchanges had to operate under an exemption for medical research, but, Bigg tells Next City, “now if you want to do syringe access you would go to the state and register with them as a needle exchange – people can just come and grab syringes and they could have as many as they needed.”

Chicago also has legal protections around harm reduction. Pharmacies are required to offer syringes and naloxone upon request. When the Chicago Recovery Alliance was founded 30 years ago, there was some pushback from the Chicago Department of Health Commissioner at the time, but for the most part, Illinois has been very progressive with harm reduction laws, Bigg says. The benefits of this long-standing harm reduction policy in Chicago show through the latest generation of drug user: “Sometimes it’s very endearing,” says Bigg. “The younger age people – I guess the millennials – they can’t even imagine a world without syringes, using a used syringe would be like reusing toilet paper.”

The vending machines will be placed at to-be-determined locations across the city. Since Black residents of Chicago account for half of the overdose deaths this year, Bigg says they are aiming to find locations in the city’s largely Black South and West Sides.

Since the vending machines will contain naloxone, there are some limitations to where they can be placed. Naloxone must be stored at room temperature. One of the vending machines Chicago Recovery Alliance purchased is climate controlled, but it was “super expensive,” so “ the other machines we’re going to have to place in a building of some sort, probably other community-based organizations. We’d loved to have them all outside, we talked about CTA stations, but we don’t know if they’ll go for that.”

The Las Vegas program that inspired this project requires clients to access the machines with an access card. While the Las Vegas vending machines did not dispense naloxone, it did dispense 23,540 clean syringes in their first year. Still, Chicago Recovery Alliance wants to avoid that barrier. The organization’s existing harm reduction work is carried out from the group’s offices and from a mobile outreach van. Bigg says that both options are “as low-threshold as we are able to keep it and that’s how we want the vending machines to be. Having to come in to the van or the office first and register and get a card, we’re really hoping not to have to implement that. We’re still really trying to brainstorm around how it can be as accessible as possible.”

One of the main issues of concern is discarded syringes in the community. Bigg added “We will probably put sharps containers near the machines. That’s really an issue of the drug war, not the participants. It’s really frustrating when people do put [blame] on the participants – if people weren’t concerned about getting arrested for a drop of illicit substances, they would keep their syringes and discard them properly. We’re all about relationship building, it’s the cornerstone of all our work.” When situations do arise where syringes are not being disposed of properly, Chicago Recovery Alliance talks to the community about it.

Tracey Helton, author of the memoir The Big Fix, has been doing harm reduction work for 22 years. Helton used to operate an informal syringe exchange program by social media, mailing clean syringes and naloxone to people who reached out to her. She started this work in 2014, and tells Next City, “part of the reason I started sending syringes through the mail is for people to have a certain amount of health privacy.” She believes that a vending machine will offer that same benefit, as well as the public health benefit of decreasing interactions with staff during a health crisis like the Covid-19 pandemic.

She also believes that it will increase accessibility for people who may not be able to access syringes in other ways. Mail-based syringes can have limited accessibility, according to Helton: “There are two states doing mail-based syringe distribution, California and New York and some places are doing more informal mailing. A lot of places, you can just order syringes, but in the United States you need a credit card so a lot of people don’t have access to syringes. It’s a public health crisis right now.” A vending machine would increase accessibility to people who do not have access to a credit card to order syringes online.

CRA hopes that the machines will help the people who cannot or do not want to come to the van, whether due to the hours of availability, inaccessibility, or individuals who have privacy concerns. Bigg is hoping the machines will help at least a quarter of their participants, with something like three or four thousand kits going out, but “That’s probably a little high for people at this point until they learn about the machines.”