Chicago Goes for the Green Lanes – Next City

Chicago Goes for the Green Lanes 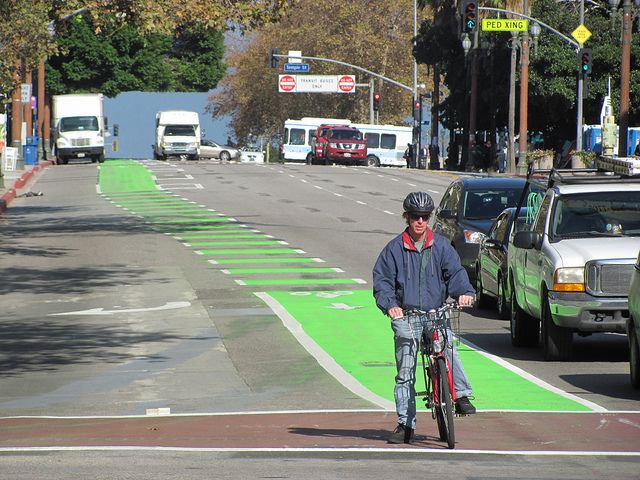 The proliferation of new bike share systems creates new demand for green lanes, such as this one in Los Angeles. Credit: LADOT on Flickr

You can glimpse the future right now in forward-looking American cities — a few blocks here, a mile there where people riding bicycles are protected from rushing cars and trucks.

Chicago’s Kinzie Street, just north of downtown, offers a good picture of this transportation transformation. New bike lanes are marked with bright green paint and separated from motor traffic by a series of plastic posts. This means bicyclists glide through the busy area in the safety of their own space on the road. Pedestrians are thankful that bikes no longer seek refuge on the sidewalks, and many drivers appreciate the clear, orderly delineation about where bikes and cars belong.

“Most of all this is a safety project,” notes Chicago’s Transportation Commissioner Gabe Klein. “We saw bikes go up from a 22 percent share of traffic to 52 percent of traffic on the street with only a negligible change in motorists’ time, but a drop in their speeds. That makes everyone safer.”

Klein heralds this new style of bike lane as one way to improve urban mobility in an era of budget shortfalls. “They’re dirt cheap to build compared to road projects.”

“The Kinzie project was discombobulating to the public when it first went in,” notes Alderman Margaret Laurino, chair of the city council’s Traffic and Pedestrian Safety Committee. “Business owners had questions. But now people understand it and we’re ready to do more.”

“Protected bike lanes are not just for diehard bicyclists — they offer a level of safety and confidence for less experienced riders,” adds Rey Colón, a Chicago alderman who first saw how well these innovations work on a trip to Seville, Spain. 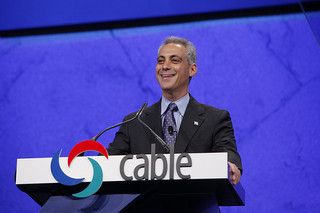 Mayor Rahm Emanuel campaigned on the promise of building 100 miles of these “green lanes” over the next four years to heighten the city’s appeal to new businesses. After the protected bike lane opened on Kinzie Street last year, more were installed on Jackson Boulevard and 18th Street on the city’s Near West Side. Thirteen more miles are planned this summer throughout the city. (The Chicago suburb of Evanston just announced plans to install protected bike lanes on one of its busy streets.)

??People on bikes everywhere feel more safe and comfortable on busy streets with a physical barrier between them and motor vehicles. In some places it’s a plastic post or line of parked cars. In others it’s a curb, planter or slightly elevated bike lanes. But no matter what separates people on bikes from people in cars, the results are hefty increases in the number and variety of people bicycling.

This particular bike lane — one of more than 50 protected bikeways built recently in at least 20 cities from New York to Minneapolis to Long Beach, Calif. — is richly symbolic for Americans. It follows 15th St. Northwest to the White House.

“This is what cities of the future are doing to attract businesses and young people,” notes Andy Clarke, president of the League of American Bicyclists. “People don’t want to drive all the time; they want a choice.”

The name “green lane” was chosen not only to draw attention to the typical color of protected bike lanes but also to highlight their potential in improving the urban environment and saving on transportation costs. “Green lanes are not just a color on the street. They are paths to better cities,” the project’s website explains, adding that more people on bikes eases congestion and boosts residents’ health, sense of community and economic opportunities. 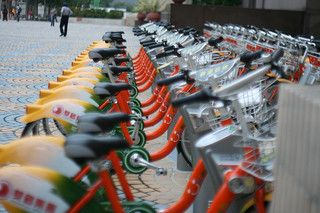 The project will connect elected officials, city planners, traffic engineers, bike advocates and citizens in these six cities to share experiences, trade data and swap ideas, says Project Director Martha Roskowski. Until this year she ran GO Boulder, the alternative transportation effort at the city of Boulder, Colo., which built its first protected bike lane in the early 1990s.

“The idea is to create the kind of bike networks that will attract the 60 percent of all Americans who say they would bike more if they felt safer,” says Randy Neufeld, a longtime bike advocate in Chicago who as Director of the SRAM Cycling Fund helped start the Green Lane Project.

The proliferation of new bike sharing systems — where people can conveniently rent bikes at on-street stations with a credit card and return them to another station near their destination — creates new demand for green lanes by getting more riders on the streets. Bike share is now running full board in Washington, Denver, Boston, Minneapolis, Chattanooga and Miami Beach and coming soon to New York, Chicago, Los Angeles and other cities.

* The Green Lane Project is coordinated by the Bikes Belong Foundation. Advisors to the project include New York City Department of Transportation (which has already pioneered five miles of protected lanes on six streets), the National Association of City Transportation Officials and the League of American Bicyclists. Major funders include Volkswagen of America, SRAM, Interbike, the Taiwan Bicycle Exporters Association and the Bikes Belong Coalition.