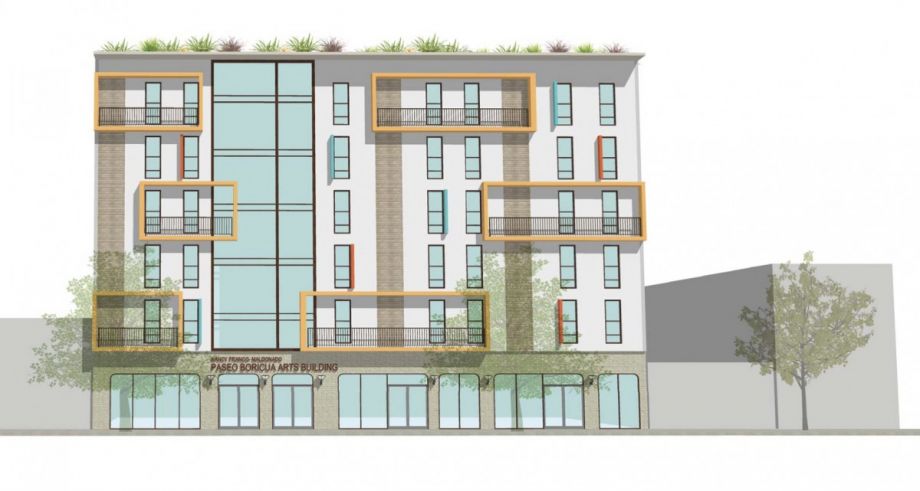 When Chicago poet Eduardo Arocho first saw the artist’s collective in Wicker Park, he was jealous. He was there for a residency, in the 1990s, but he couldn’t shake the feeling that something like it should exist in the neighborhood where he grew up, Humboldt Park.

“I started to think just how we can do something for Puerto Rican artists because I know many of them that have a lifetime of experience and have nothing to show for it,” says Arocho, who is now executive director of the Division Street Business Development Association, which provides support to entrepreneurs in Humboldt Park, long home to the city’s Puerto Rican diaspora.

Nearly two decades later, Arocho’s decades-old vision is coming closer to reality in the form of the planned Nancy Maldonado/Paseo Boricua Arts Center. The mixed-use complex will be built on a stretch of Division Street known as Paseo Boricua, a center of Chicago’s Puerto Rican political and economic activity.

The center will replace four derelict buildings — including the former site of the long-vacant Ashland Sausage Company — and provide housing for about 30 artists. One- and two-bedroom apartments will double as studios where they can work and showcase their pieces. A 100-seat theater and gallery will be on the ground level.

“It was important to figure out, how do we keep artists in the community, many of who cannot afford to,” says Jose Lopez, executive director of the Puerto Rican Cultural Center, which purchased the buildings for $2.5 million with a loan.

He sees the live-work spaces as a way to address affordable housing issues, and also a means for economic opportunity for creatives of color.

About 30 artists have already expressed interest. An income threshold has not yet been determined for potential applicants, but those selected will be asked to enroll in a 12-week small business boot camp administered by the Division Street Business Development Association. It will address, what Lopez says is one of the biggest struggles for artists, particularly artists of color: financial literacy.

“Looking at artists, many are very lacking in business sense,” Lopez says. “We almost have to develop a culture of entrepreneurship from the ground up.”

The artists will develop a business plan, which they can take to potential lenders. Applicants who are unable to complete the boot camp or come up with a viable plan will lose their spot for housing.

In fact, having a business plan is central for the development of the mixed-use project itself, Lopez says. In all, the project is expected to cost an estimated $12 million. Lopez says the Puerto Rican Cultural Center will seek much of the funding using Chicago’s tax increment financing tool and through a grant from the state of Illinois. But those sources will not cover all the costs. To close the gap, Lopez hopes to go to a bank with his own solid business plan that shows the development will be self-sustaining.

Construction could start as soon as summer 2018.

“With the art center and this new development, that’s really going to set the tone for our vision, what we’ve always had for the [corridor],” says Chicago Alderman Roberto Maldonado, whose wife the project was named after following her death.

The Nancy Maldonado/Paseo Boricua Arts Center is just one of many initiatives that the Puerto Rican community has worked on to address economic equity since the first wave of Puerto Ricans began making their way to Chicago in the 1940s.

Lopez, whose brother Oscar Lopez Rivera was a controversial activist and political prisoner who was pardoned by President Barack Obama after serving 35 years in prison, says the community has long been victims of gentrification beginning when families were pushed out of lakeside neighborhoods like Lincoln Park and Lakeview in the 1950s and ’60s. They moved to Humboldt Park, where they dealt with high school dropout rates, poor housing conditions and a racist police force.

In the 1960s amid a series of riots and civil unrest along Division Street, the Lopez brothers and others worked to change conditions in Humboldt Park, with the addition of an alternative school that provided bilingual education, a healthcare center that dealt specifically with the high instance of diabetes among residents, and a number of services for the area’s homeless population.

But displacement threatens amid rapid gentrification. When the 606, a 2.7-mile elevated trail that runs through Wicker Park, Bucktown, Humboldt Park and Logan Square, was unveiled in 2015, real estate values skyrocketed and also prompted concern about affordability.

In May, Maldonado and others introduced an ordinance that would “put a brake” on gentrification surrounding the 606 by increasing the demolition fee for residential properties and charging a de-conversion fee when multiunit buildings are turned into single-family units. (It should be noted that Maldonado profited from selling four properties that border the trail.)

“The pace of gentrification is rampant, I’m not going to deny that,” Maldonado says. “The artist center is an example of how we can slow it down and support economic diversity.”

Artists’ incomes can widely differ. Arocho recalls a recent fundraiser held for a local artist who was diagnosed with lung cancer. “I thought, wow, he’s over 60 years old but has nothing, when he dies he will leave nothing left,” he says. “I thought about people like him and others that not only would have a building to live in, but maybe something that can help them in their retirement.”