There’s a 14-Foot Bust Floating Down the Chicago River 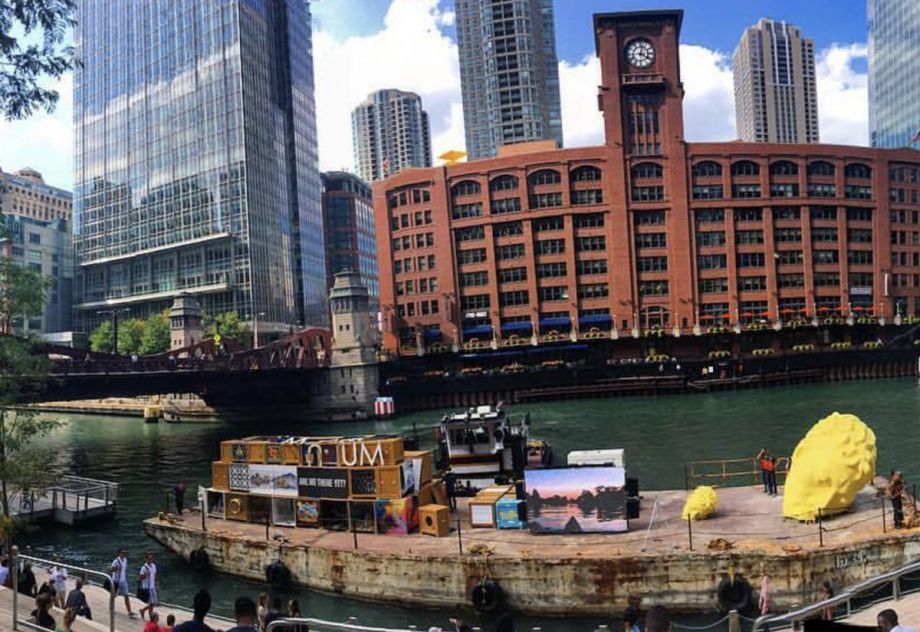 When co-founders Faheem Majeed and Jeremiah Hulsebos-Spofford launched Chicago’s Floating Museum, they chose the name as a metaphor. Their goal was to create a traveling art museum that not only relocated elements of the institutional art world from downtown Chicago to other neighborhoods, but also evolved at each site to reflect the input of artists and residents living there.

“We were thinking, what if the form changes to highlight the needs of that community [we’re] visiting?” says Majeed. “What can we do not for, but with? It’s not about bringing arts to a community. It’s about collaboration, honoring what is there.”

Now, Floating Museum is taking a more literal approach to their concept with River Assembly. The new installation is built on a barge that’s making stops along the Chicago River throughout August. It features three main components. There’s a 14-foot bust of Jean Baptiste Point du Sable, the Haitian-born immigrant said to be the first non-native settler of Chicago. There’s a huge screen displaying digital art from 25 Chicago artists. And there’s a pyramid of decorated and painted shipping crates, a reference to the river’s industrial roots.

“Traditionally, Chicago uses the lake as recreation and the river has been for commerce,” Majeed says. “The river is just recently considered as a recreational space. The art pays homage and reference to how the river was originally used, but also the migrating culture from one side of town to the other.”

In addition to the art on the barge, Floating Museum hosts daily programs such as guided tours, live music, DJ sets, dance performances and panel discussions.

The barge began its journey in Bridgeport, a South Side neighborhood on the river. It’s currently at Riverwalk, a linear park along the river in downtown. It will stay there until Aug. 27 when it moves to its final site at Navy Pier.

Riverwalk is a central piece of Chicago’s effort to make the river as much of a recreational destination as the lakefront is. The Riverwalk is divided into “rooms” created by the many bridges crisscrossing the river. The barge is docked in front of the River Theater room, which features steps down to the water that serve as stadium seating.

“At each of these docked locations, it’s as much about the location as the structure itself. We had people fishing next to us at one location. Crowds of people were eating their lunch around it at another. It’s exciting to move around the city and see this come to fruition,” says Majeed.

Though River Assembly’s trip down the river is only halfway done and Floating Museum has plans to move it onshore for an installation in September, the group is already thinking to the future.

Next summer, they plan to create an installation in the Austin neighborhood on Chicago’s West Side. What that show ultimately looks like will depend on what the community wants and which local artists get involved.

“We’re bringing a big show to a neighborhood that doesn’t usually get them,” Majeed says. “Again, we’re going to build with, not for. We’re going to have conversations and build based on interest and needs of stakeholders. … Our real goal is to make Chicago into a museum and its neighborhoods into galleries.”