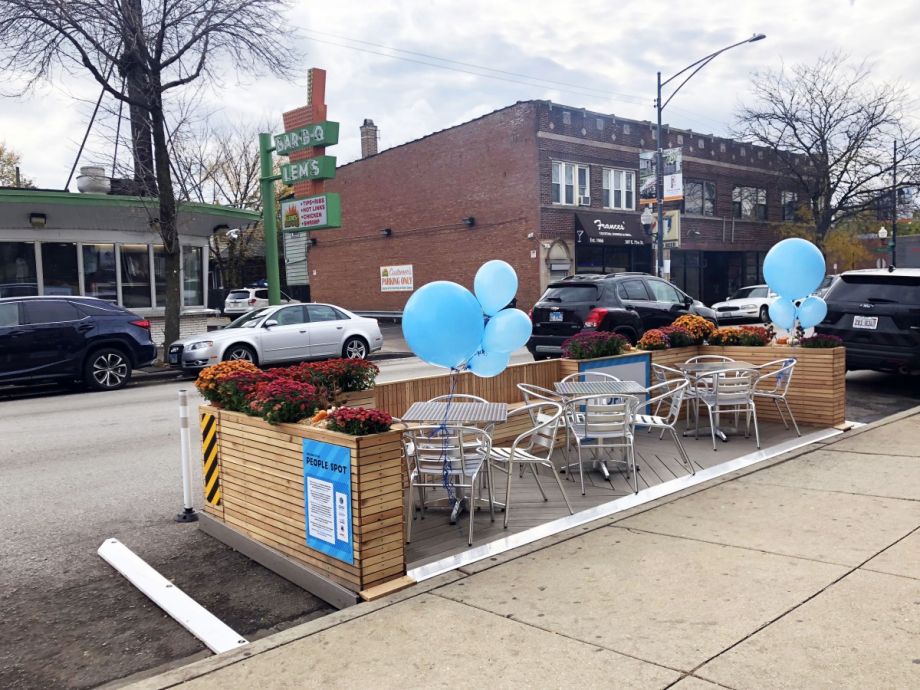 The pop-up People Spot in Chicago's Chatham neighborhood. Design plans for the parklet are available for free, for other community groups to replicate. (Credit: Latent Design)

Chicago has installed a pop-up parklet in its Chatham neighborhood, in the city’s South Side. That wouldn’t seem like such a big deal, except that, according to Streetsblog, parklets have had a “rocky history” in the Windy City, as the city has previously required local BIDs to pay for the spots, which can run in the tens of thousands of dollars. The new parklet, which Chicago is calling a “people spot,” was designed by CDOT and the agency promises to make the plans available for free to any community groups that want to build their own parklets.

The “people spot” takes up two parking spaces and consists of seating, potted plants and a wooden fence. The design and construction of the first People Spot was funded through a $30,000 grant from AARP, which had sought ideas to make cities more livable for people of all ages through “quick action” projects. Chicago’s Metropolitan Mayors Caucus also received a grant through the same program to develop model building codes to allow ADUs in the region. In total, the program gave out $1.3 million to 129 projects, including a “hammock park” in the small town of Morrilton, Ark., a community garden in San Francisco, and bike racks in Annapolis, Md.

In Chicago, Alderman Roderick Sawyer (6th Ward) said in a statement that he was “…very pleased that the 6th Ward was selected as the first location for the installation of the People Spot …The People Spot will further promote community efforts to activate the street and increase economic development along the 75th Street commercial corridor.”

Chicago-based Latent Design designed the People Spot. Katherine Darnstadt, founder and principal of the firm, told Block Club Chicago, a nonprofit news organization created by former Chicagoist editors, that the parklet is modular and movable. Community groups can disassemble a parklet for storage during Chicago’s harsh winters or simply move it to a new space. And in fact, that’s what the Chatham Business Association plans to do with its parklet — remove it for the winter and reinstall it at a different location on 75th Street in the spring. The city will look for areas designated as “Retail Thrive Zones” in the south, southwest and west sides. Darnstadt added that having the design work available for free should lower the cost of building a new People Spot to $10,000-$20,000.

“We wanted to make the design with readily available materials that you can purchase from anywhere so nothing’s really special order,” Darnstadt told Block Club Chicago. “We thought hard about how could make the most flexible and unique design that everyone could build.”

Other parklets in Chicago have not fared well. According to Streetsblog, residents and business owners often push back on the loss of parking spots, and the costs of building, installing, and maintaining the People Spots has led to some being removed and not replaced. The Andersonville Development Corporation, which installed two parklets in the early part of the decade, spent a total of $45,000 on building the spaces, a former employee told Streetsblog in 2015. Removal, storage, permits, and new plants cost an additional $5,000 a year.