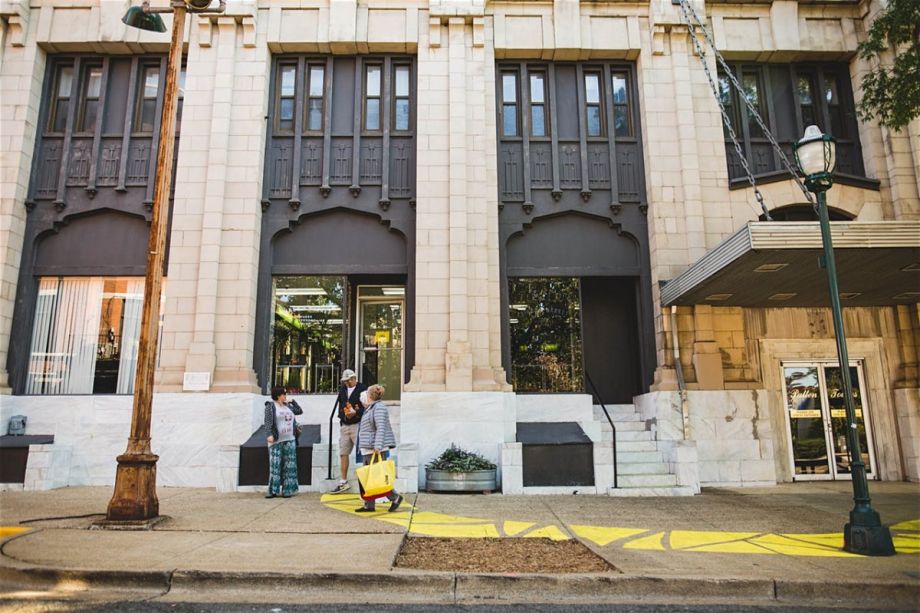 A yellow painted sidewalk path leading to the entrance of Bingo's Market, on the ground floor of Patten Towers. (Credit: The Silver Banner Photography)

Like other post-industrial cities, Chattanooga was struggling to find its way after its manufacturing base picked up and relocated overseas, leaving behind them a crippled economy.

Hoping to reignite the local economy, in 2015, business, city and nonprofit leaders developed a 140-acre “innovation district” downtown, providing a space for tech startups, business accelerator programs and youth training programs. The center of this district was the former Tennessee Valley Authority building, which over the years had become underutilized as the utility downsized. Now repurposed as the Edney Building, it serves as the district’s anchor.

Across the street from Edney are the Patten Towers, a public housing development for low-income seniors. As the district became flooded with tech-savvy entrepreneurs, the question arose over how these residents of the towers would be included in this so-called revival.

Last fall, a group of nonprofits banded together to launch Bingo’s Market, a pilot grocery store on the ground-level of Patten Towers that not only provides the new influx of more affluent entrepreneurs with gourmet grab-and-go lunch options, but gives the residents with a healthy option for groceries much closer to home.

Behind the effort are Causeway (which describes itself as a nonprofit social innovation studio, by providing coaching, funding, and project management for early-stage social enterprises), The Enterprise Center (which manages the Innovation District), the YMCA of Metropolitan Chattanooga, and PK Management (which manages Patten Towers).

Causeway and startup accelerator The Company Lab received a grant from the Lyndhurst Foundation back in 2015 to begin working toward connecting the towers and the Innovation District. Along with The Enterprise Center, the organizations started facilitating focus groups with residents to better understand their needs, hosting a weekly business class and sponsoring a health fare. Among their findings, they learned that access to food was the biggest area of concern among for 51 percent of residents.

Patten Tower residents are at least 62 years old or have a physical or mental disability and earn below a certain income level to qualify for housing. The 2015 survey shows that many of the residents make less than $500 a month.

For the past several years, the YMCA of Metropolitan Chattanooga’s Mobile Market had made weekly stops at the towers a few hours at a time. The trouble with that model, says Chelsea Conrad, creative director with Causeway, is that it was never supposed to be a long-term solution to healthy food access but more of a temporary project to highlight the demand for fresh food. The truck has instead been in operation for seven years and is heavily subsidized.

“The whole point of Bingo’s was to strike a balance of affordability and financial sustainability that doesn’t rely on grant funding,” says Conrad in an email.

During the six month pilot period, PK Management allowed Bingo’s Market to use the space rent-free. Just two employees work limited hours to staff the market, but a growing sales volume and innovative pricing strategies are factors that organizers hope will give the market some staying power.

“There’s really nothing like this downtown,” says Tara Williams, who went from working on the mobile market for six years to managing Bingo’s. “There’s a Family Dollar, which [sells] overpriced, unhealthy crap, or a Publix across the river, but you have to take a bus to get there.”

What if that weekly truck stop could be a permanent fixture, organizers thought. The impact could even go beyond easier access to healthy food. Bingo’s is situated in a room that faces Georgia Avenue, which Williams says has been vacant for quite some time. She says Bingo’s serves as not just a convenience store, but a community hub.

“I feel like there’s such a dynamic group of people that come in there and are interested in the fact that there’s actually something here,” Williams says, adding that some residents turn to the store not just for food but for socializing as well.

In the first six months in operation, the challenge for Williams has been stocking the fresh produce grocery staples that residents need and keeping prices down, while appealing to the startup crowd who might be more interested in grab-and-go items for breakfast at dinner.

To encourage residents to frequent Bingo’s, folks with an EBT card get a 10 percent discount and the owner of the local Mad Priest Coffee Roasters provides cups of coffee for $1 (as opposed to $2 to $3.50 charged for a cup at the small batch roaster’s coffee shop).

What no one will find are unhealthy merchandise like cigarettes, booze or food or drinks that contain high fructose corn syrup. For sodas, folks have to walk around the corner to the nearest convenience store.

The six-month pilot period ended in March and Williams says she’s hopeful that PK Management will allow Bingo’s to remain, though she won’t there to see it through. The intention was for Williams, a Knoxville native, to take over as the owner after the trial period ended, but she says she had to resign so she can support her sick mother and go back to school.

While she doesn’t doubt that Bingo’s will one day realize profitability, she said it’s been a challenge to learn the ropes of running a business, while supporting herself on a limited income (she earned $10 an hour, the same she earned when she worked the mobile market).

Conrad says the organizations involved have recently agreed to continue supporting Bingo’s for another six month period and are looking for a replacement to take Williams’ post. If a replacement cannot be identified soon, an existing YMCA employee will fill in for the interim.

“We are at that six month mark and can all see that the store is fully capable of being sustainable one day, but it is not quite there,” says Conrad in an email.

For example, the market was operating in the black in January, but dipped back into the red in February, Conrad says. The holidays, winter weather, and a construction project across the street all were possible factors for the slowdown.

Even though she will not get to see if Bingo’s can sustain itself long term, Williams is certain it’s already had an impact on residents’ lives.

“It spawns conversation, it’s a place for them to get away and talk to somebody and do something different,” she says.