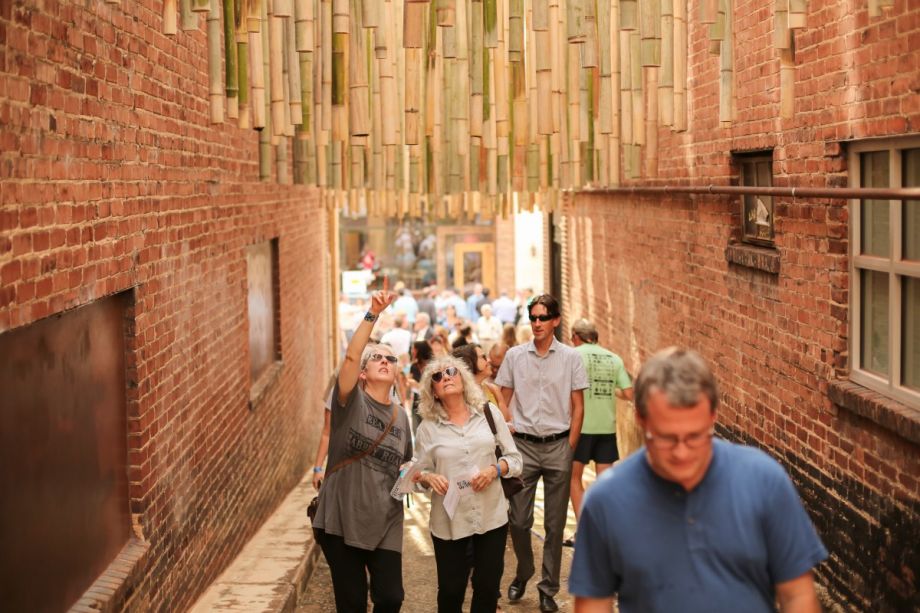 As Chattanooga continues its bid to entice housing developers, residents and employers downtown, and prepares to renovate its primary park later this year, temporary art installations in alleyways are highlighting how public space is a critical piece of that puzzle.

One alley hosts both a sound installation and a series of sculptures that mimic the movement of the stars. In another, visitors walk below the “Urban Chandelier,” a sparkling curtain of reflective triangles that catches and projects natural light onto the floor and walls; another hosts a gently swaying forest of suspended bamboo.

The most popular installation, Neural Alley, consists of painted wooden blocks like pixels that can be moved around in peg boards on either side of the alley to spell out words or create pictures and designs. Cameras capture the movement every 16 minutes, creating a record of all the iterations.

It’s simple, but interactive and engaging, which is exactly the goal of Passageways, says Amy Donahue, River City Company’s director of marketing and communications. “Space is limited. … How can we create more with it?” she asks.

For many years, as Chattanooga’s downtown housed employers but few residents, public space was not a priority. Revitalization efforts in the 1990s spurred the development of large parks along the city’s waterfront, but “the public space formed really as more tourist related,” says Jenny Park, Chattanooga’s strategic capital planner. “The housing that we’re seeing come online downtown is really shifting what the public space needs are.”

Just 2 percent of Chattanooga’s population lives in the city center, but there’s been a steady increase in development and residents: Between 2013 and the end of 2017, the downtown population is expected to double. Chattanooga’s Innovation District is also drawing new businesses, and spurring a market for dense, walkable housing. A 2014 River City Company plan for spurring City Center development estimated the area could support over 900 residential units — provided other amenities like grocery stores and park spaces were developed to support them.

Now a redesign is in the works for Miller Park, the city’s central park, and Miller Plaza, a private space owned by River City Company right across the street. The two spaces, though adjacent and often used in concert for large events, are separated by a busy roadway, and Miller Park goes underutilized because of its dated design. It’s below street level, a feature intended to give parkgoers respite from traffic, but which serves to cut off the park from the city as well.

The redesign would bring Miller Park up to street grade and use a planted median and continuous paving to link the park and plaza. That would make it easier to block off the street between them when they host joint events, like the free Night Fall concert series River City Company runs every summer Friday. A third nearby public space, Patten Parkway, would also get a makeover with an outdoor cafe, market and seating area.

With construction slated to begin this year, Donahue says one goal of the Passageways project was to “get ahead of the renovation of Miller Park and make it habit for people to enjoy public space in City Center, because that’s not necessarily something that happens right now.” The alleys, which are privately owned by the adjacent buildings, play host to formal events like poetry readings and attract informal visitors who just happen to be passing by.

“It’s exciting to have things for people to stumble across as they’re walking. That’s part of the downtown experience,” says Park.

Installed in August in time for the 2016 AIA Tennessee meeting, the alley installations are now in their midlife, and River City Company is trying to figure out what should happen next. The installations were only intended to last a year, but “now the expectation is that those spaces are there and they’re usable,” says Donahue. Come summer, River City Company will decide whether the installations can take the wear and tear of another year outside, or hold another call for artists to replace them. The project may also expand to include more alleys in the area.

“One of the things we wanted to do was change perception,” she says, the same goal behind a River City Company project to install art and technology in 19 vacant City Center storefronts in 2014. The project came to an end because all of those storefronts were eventually leased out. Donahue hopes Passageways sets the stage for future transformations too.

“We’re very excited about what’s going to happen at Miller Park in Chattanooga,” she says, “but it doesn’t have to take years and a million dollars of capital campaigns to create special places in your city.”