Charlotte Puts Play Back Into Public Spaces – Next City 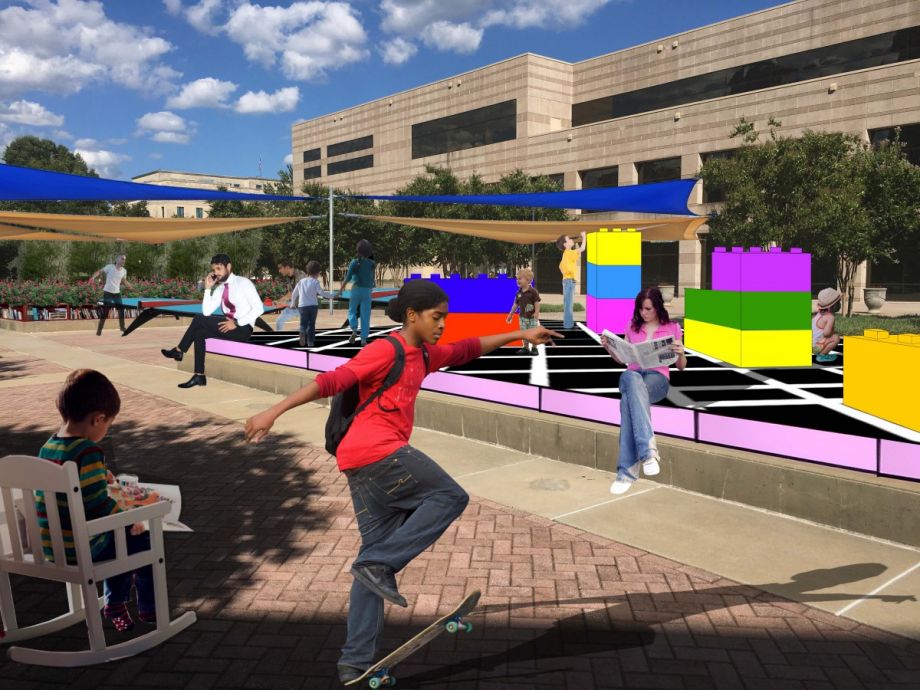 This September, when 50 projects that promote public play in cities around the U.S. won funding from nonprofit KaBOOM!, both wacky innovations and commonalities stood out.

Eighteen of the projects involved sidewalk installations, including a proposal to install retractable jump ropes outside of barber shops and salons in low-income neighborhoods in Richmond, Virginia. Eight of the winners will paint on sidewalks, two on crosswalks, and two more on public stairs. Bus stop installations are popular too. One in McAllen, Texas, will be replaced by a large swing set.

Also popular: Charlotte, North Carolina. The city of 800,000 has three winning projects in KaBOOM!’s Play Everywhere Challenge, which awarded a cumulative $1 million to the 50 winners. Only Philadelphia and New York saw as many projects funded.

“I really I think Charlotte overall has a spirit of working together, so as soon as we found out there were multiple winners in Charlotte, we were all like … we have to work together, we have to share resources,” says Erin Gillespie, planning and development associate at Charlotte Center City Partners. The nonprofit, which promotes business development, walkability, arts and more in Charlotte’s Center City, was a winner for its proposal to install musical instruments along the city’s Rail Trail.

That trail, which runs along Charlotte’s Blue Line, is maintained by the city’s transit agency but consists of a series of easements from all the adjacent property owners. The Rail Trail Symphony is on city property, as are several other Center City Partners projects, which means the nonprofit frequently works with another winner — the Charlotte-Mecklenburg Planning Department’s urban design division.

The city’s Play Everywhere proposal has been a long time in the making: Transform the Charlotte-Mecklenburg Government Center Plaza from dead space into beloved space. “You know it’s a good idea when multiple people are working amongst themselves and then connect back,” says Monica Holmes, an urban designer with the city.

The plaza, designed in the 80s, is a hardscape triangular space with four fountains that were intended as its main focal point. But they were leaking into the parking structure below, and thus have been off for a decade. “Over time [the plaza] didn’t age very well,” says Homes, and the city has been wary of turning the energy-intensive fountains back on. “We’re sitting in a new place where spending that much money on energy consumption is just not a priority”

About a year and a half ago, multiple people across city and county departments came together to discuss how residents use the plaza today, and how it might better serve them in the future. Because this is where residents both acquire a marriage license and show up for court, “a lot of people are here for the best or worst day of their lives,” says Holmes.

But before now, “There was never really a thought about who might use the space and how they might use the space, and what the space said about the city of Charlotte, and what the space said about city services,” she continues. “There is some statistical evidence that when people believe their neighborhood or city is beautiful they trust their leaders more. We’re looking to test that theory in our own backyard, by making this a loved space and a space where people feel welcome.”

Her department hosted a lab in the center’s lobby to source ideas, asking people to write or draw their visions. Trying to think of the range of ages using the plaza, they also visited a free child care center associated with the courthouse serving 7,500 children a year to ask what the kids would want to see.

In the end, the city applied to the Play Everywhere challenge to fund a three-month pilot, GovPorch, to test out some ideas. People said they wanted to see a multiuse plaza where they could buy coffee and use free WiFi, but also have a quiet moment to themselves, or allow their children to play.

In the long term, the city doesn’t know if it will remove the fountains wholesale, which would cost millions of dollars. For the pilot, some will receive landscaping, and others will get colorful covers topped with games. One will have a climbable “hornet’s nest,” another a set of human-sized Legos for building and imagining new Charlotte cityscapes. The pilot will also include rocking chairs, pingpong tables and stepping stones painted by local kids. After the three-month pilot, set to start in March and wrap up in May, the city will reconsider long-term solutions.

The Rail Trail Symphony should start installation in the coming weeks, says Gillespie. That project was also inspired by a desire to create a more “sticky” public space. Center City Partners had noticed that the Rail Trail was seeing increasing numbers of people biking and walking, “but we haven’t quite been able to build out the part of our vision where we’re creating nodes” where people — including children — stop and spend time, says Gillespie.

Charlotte’s third project, S.P.A.R.K (Socialize. Play. Accommodate to Reach Kids), proposed by Chandra McCloud of the Konnected Foundation, aims to create play spaces around bus stops and adjacent parks in two neighborhoods: Beatties Ford and Central Ave. According to the proposal, S.P.A.R.K. will activate the bus shelters with sidewalk painting, murals and seesaws, and draw new use to the parks with bimonthly play dates. McCloud could not be reached for this article.