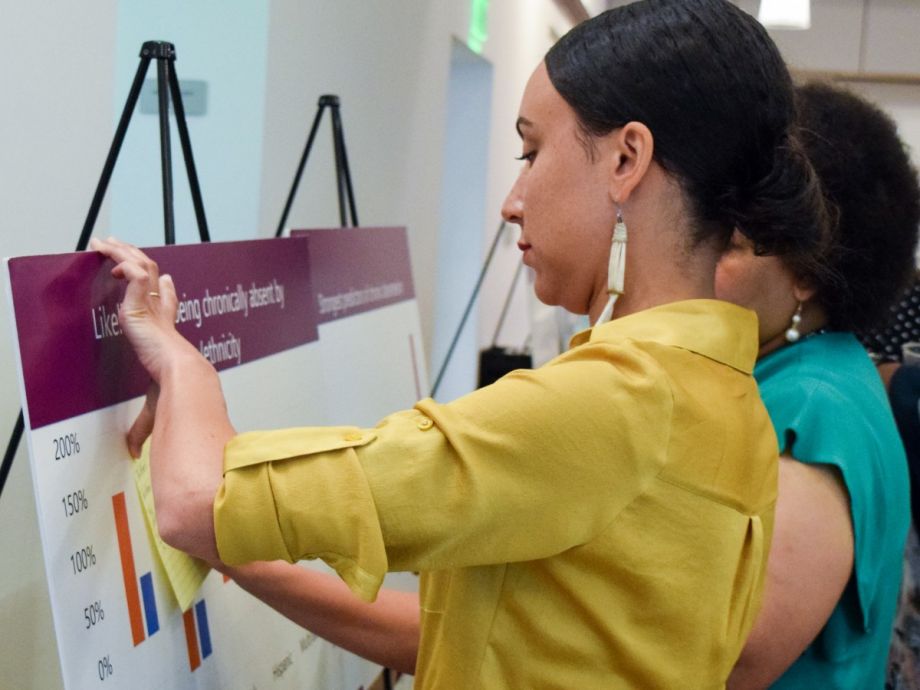 As the 2014 North Carolina Teacher of the Year, James E. Ford had a chance to visit classrooms across the state. Ford taught many students of color in his Charlotte classroom, and on his tour he noticed the same issues facing his students were evident in public schools across North Carolina.

“Wherever there were students of color, I continued to see the same racialized disparities,” Ford says. He saw they had less access to educational resources like advanced coursework, experienced teachers and teachers of color. He transitioned to education policy, then school consulting following the state award. He also struggled to find extensive research on or assessments of embedded racial inequities in North Carolina schools.

His fruitless search inspired him to start an organization to fill that void. To do so, he turned to Janeen Bryant, a former teacher he met when she was running for Charlotte-Mecklenburg’s school board. Though her run was ultimately unsuccessful, Bryant persisted in grassroots organizing around educational disparity. “When I started teaching, I knew there was a real disconnect between what we needed as a community and how the schools were serving our populations,” Bryant says.

This year, the pair launched the Center for Racial Equity in Education (CREED), not only to channel their years of experience as educators but also to push for new conversation, advocacy and policy that would bring racial equity into North Carolina classrooms.

“We were thinking: What would it mean for two former teachers of color with combined 25 years’ experience, who have been deeply touched by the public school system, to create and sustain systems of equity?” asks Bryant. “We have policymakers and system change leaders who are not deeply impacted by the things they’re making change about. For us, it’s the exact opposite.”

They knew they needed to start by filling the research gap on racial equity as it pertains to North Carolina education.

In August, CREED released two reports supported by the N.C. Center for Public Policy Research: Deep Rooted: A Brief History of Race and Education in North Carolina and E(race)ing Inequities: The State of Racial Equity in North Carolina Public Schools.

Educational inequality persists across the state. According to a 2018 Newsweek article, schools in Charlotte — where Ford and Bryant taught — “are nearly as segregated as they were before the 1954 Supreme Court decision of Brown.”

“There was a grandmother in a rural North Carolina county who got a copy of the report from her daughter, an educator,” Ford says. “As a black woman, she was surprised how much student sentiment about their educational experience reflected hers, in segregated schools.”

The second report, E(race)ing Inequities, takes a look at current-day inequalities. The report points out long-standing racial gaps in achievement, graduation, dropout, grade point averages and standardized test scores. But unlike most studies Ford found on race and education prior to starting CREED, E(race)ing Inequities examines how access to educational resources differs across racial groups, as opposed to the outcomes.

Highlighting gaps in access and opportunity was important, according to Ford, as it challenges the narrative that communities of color place less value on education, or are less deserving of the benefits of public education. “It’s amazing to me what can happen when we don’t begin with the narrative of children of color and their deficits,” says Bryant. “We’re beginning with a narrative of agency and celebration.”

The reports serve as a basis for interventions and reforms, Ford and Bryant say. Bryant explains the work of CREED in three phases: community building, convenings and trainings, and finally work that catalyzes equity, policy and strategic intervention. “But first, we need teachers to understand what equity means,” she says.

With support from the global social justice organization Oak Foundation, CREED launched a yearlong equity fellowship to support a teacher fellow, principal fellow, school board fellow and journalism fellow in North Carolina. “They’ll spend a year with us deepening their knowledge on race and how race and inequities manifest in our education system,” Ford says.

Another goal of CREED is outreach and trainings specifically with educators of color, who are underrepresented in the state and experience higher job turnover, according to Ford. CREED is developing a “learning network,” a way for teachers of color to support one another. The organization also started a podcast to tell personal stories. Topics have included the experience of Latinx and immigrant students in North Carolina and the role of HBCUs (historically black colleges and universities) in teacher diversity.

Ford finds inspiration in the story of Freedom Hill, a post-Civil War community in North Carolina known as one of the first U.S. towns founded by freedpeople. Its community members valued education but were under constant threat of white backlash.

EDITOR’S NOTE: This article was changed to correct where James E. Ford worked as a teacher.