Equality Advocates: N.C. Anti-LGBT Law “Is Not Us” – Next City

Equality Advocates: N.C. Anti-LGBT Law “Is Not Us” 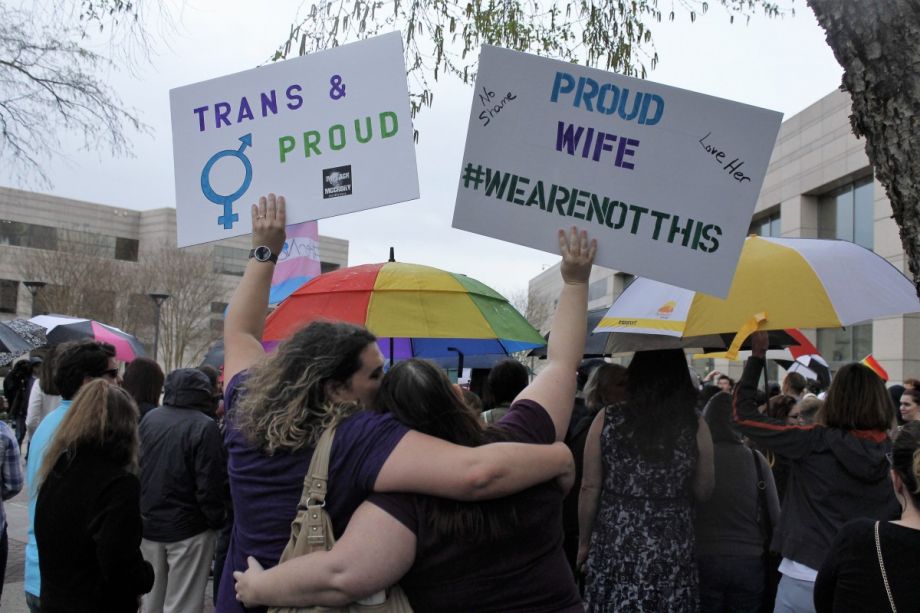 Two protesters hold up signs against passage of legislation in North Carolina that limits the bathroom options for transgender people at a rally in Charlotte on March 31. (AP Photos/Skip Foreman)

The morning he was expected to meet with constituents in Raleigh for an emergency legislative session on a controversial bill threatening to overturn an anti-discrimination ordinance supporting gay residents, Matt Hirschy’s Facebook message read: #ThisIsNotUs. Urging over 5,000 friends and followers to take action, he published the phone number of Governor Pat McCrory’s office asking supporters to call in opposition to the pending bill, which would ultimately put North Carolina in the spotlight amid what is now a national debate on gay and transgender rights in the state.

As the director of advancement at LGBT policy and advocacy group Equality NC, Hirschy, since taking on the role two years ago, has faced an ongoing uphill battle, leading the organization’s efforts to advance legal protections for gay and transgender citizens living and working in North Carolina.

In February, the city of Charlotte passed an ordinance that would have allowed transgender individuals the ability to use public bathrooms according to how they self-identify. The ordinance extended policies barring businesses from discriminating against individuals on race, gender, religion and age, to include similar protections for gay, lesbian and transgender residents. (Similar laws already exist in the South Carolina cities of Columbia and Charleston, protecting government workers from discrimination based on sexual orientation and gender identity.)

“At 2 or 3 a.m. [that morning], we heard the legislature was planning an emergency special session to overturn the ordinance we supported in Charlotte. Everything was going to be run through quickly. There would not be an opportunity for discussion or a floor debate. In total, there was only less than 30 minutes of public comment and now we’re facing this national disgrace,” says Hirschy, who quickly rallied supporters via email, phone calls and social media to share their personal stories of discrimination and concerns for workplace protection before the governor signed the bill into law.

Objections by many residents and business owners have been amplified by a media storm that has brought national attention to the state and threatens North Carolina’s economic future for all residents.

“We were surprised by what I feel was unprecedented support from the business community. They really took a step out in the policy realm, which is a very new thing for this type of issue. Businesses are not only saying that they dislike the bill … they think it is heinous,” explains Hirschy.

Hirschy has been leading Equality NC’s Business Equality Council, filtering conversations with corporate executives, and disseminating critical calls-to-action for local and national companies to organize and provide support for LGBT rights as they work to repeal the new controversial bill.

CEOs from over 100 national companies, including Uber, Starbucks, Facebook, Cisco, and hometown firms, Bank of America and Wells Fargo, signed a letter asking McCrory to repeal the bill. Major corporations have since divested from North Carolina, taking with them jobs and revenue, bruising opportunity for North Carolina to stake its claim as a leader in business innovation.