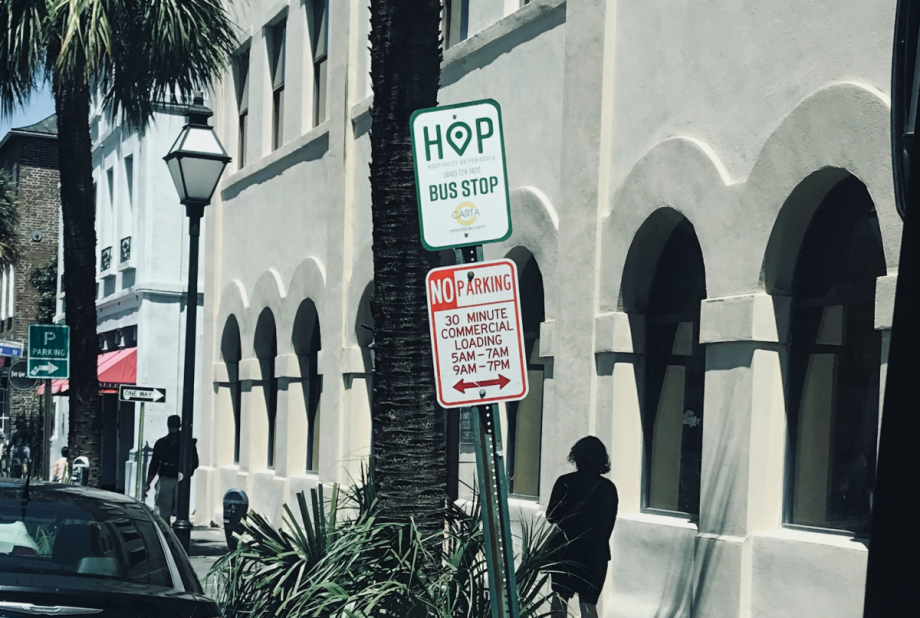 Signage for the new park and ride shuttle service in Charleston. (Photo by John Keener)

Charleston resident Chaz Wendel, general manager of the Charleston Crab House, lives just a 5-minute drive away from work. He commutes by car because it is the most direct mode of travel. But metered parking near his eatery costs him a whopping $300 a month.

“Parking and driving around downtown has become quite a pain,” he says.

Charleston’s rapid growth spurt is proving to be a mixed blessing for Wendel and his fellow city residents. On the one hand, the city is raking in enormous revenues from its thriving tourism industry, which increases funding for local services and yields profits for area businesses. At the same time, the five square miles that make up Charleston’s downtown peninsula — which sees an estimated 15,000 visitors daily — is grappling with severe traffic congestion and parking challenges that cost local commuters precious time and hard-earned money.

Now, thanks to a new park-and-ride program, the “Hospitality On Peninsula Park and Ride Lot,” Wendel can commute to work free of charge. The pilot transportation service, launched this April, offers Charleston commuters daylong parking for a flat $5 at a city-owned lot in northern part of the peninsula, and a free connecting shuttle bus to and from six central-city stops. For commuters like Wendel, who live on the peninsula, the shuttle service alone is free. Users of the shuttle, which runs every 15 minutes, 21 hours a day, can track the buses in real-time on their smartphones. In addition to 170 parking spaces, the Hospitality on Peninsula Lot contains bike racks as well as a dock operated by the city’s bike rental program, Holy Spokes.

The park-and-ride service is intended to save considerable garage and on-street parking expenses for hospitality and food-and-beverage workers, Charleston’s largest workforce. In a 2017 College of Charleston parking survey, 40 percent of the 500 hospitality workers reported that they live in West Ashley, which is about ten miles from the city center. Approximately 80 percent of respondents reported that they drive alone to and from work, and nearly 30 percent of them spent more than $100 on parking costs each month. Garages in downtown Charleston charge an average parking rate of $8-$16 per day.

“I think [the park and ride] is a really good idea,” says Ben D’Allesandro, who owns and runs a local pizza shop with his brother in downtown Charleston. “Economically, workers could save a whole day’s worth of parking, and the headache from using the meters and dodging meter maids.”

Wendel plans to use the service on a regular basis. “Just being able to go to the [bus] stop, jump on, and not have to deal with the stress of traffic or parking is pretty amazing,” he says.

Finding a free spot among the mere 400 or so coveted parking spaces in the city center is like winning the lottery, according to Charleston City Council Member Mike Seekings, a main player in spearheading the park-and-ride program. Seekings also chairs the Charleston Area Regional Transportation Authority (CARTA), the government entity that operates the new service and is currently covering its $75,000 monthly operating cost.

“It is a wrestling match every day to get in and out of the [area],” he says. “The whole idea of [the park and ride lot] is to get a safe, efficient, convenient way to move people on and off the peninsula with a system they can rely on and can afford.”

John Keener, owner of three downtown Charleston restaurants (including the Crab House) and president of the Greater Charleston Restaurant Association, thinks that the new program will increase work opportunities for Greater Charleston residents who would otherwise find it a hardship to access the peninsula daily. Roughly one-third of Keener’s 250 employees drive to and from their jobs—and, of these 75 workers, Keener hopes that at least half of them will use the park & ride service.

“That would be a major win,” he said.

Keener, who lives about ten miles away on Johns Island, plans to make use of the park-and-ride service himself from time to time. “It was very comfortable and relaxing when I rode [the shuttle] yesterday,” he says. “I parked my car and was driven almost to the front door of my restaurant.”

It will remain an uphill battle for the peninsula’s car-commuting workers to change their travel habits. Nearly half of the 2017 parking survey’s respondents said that a park-and-ride service would not be a transportation option for them, and one-fifth of respondents said they would not use public transportation. The negative response is likely due to the fact that mass transit is not a travel mode that Charleston residents are generally accustomed to, according to Doug Warner, media relations director of Explore Charleston, a nonprofit that promotes Charleston tourism, which partnered with the city and CARTA to launch the park and ride.

Despite this potential hurdle, Seekings says, “From watching [the park and ride shuttle] in the first four days, I have no doubt that it’s going to succeed.”

Greater incentive for the park and ride is already in place. The city recently doubled the hourly fare of metered parking spaces, from $1 to $2, as well extended its meter-monitoring hours from 6 p.m. to 10 p.m., Mondays through Saturdays. “It really makes metered spaces more for what they’re originally designed to do—they’re not supposed to serve as a permanent parking solution for someone working a shift,” Warner says.

If the park-and-ride program is a success, CARTA and the city aim to roll out the park-and-ride service to other Greater Charleston communities, including West Ashley and Mount Pleasant. Expanding and sustaining the program to include other areas around Greater Charleston, however, will surely require private-sector support, according to Seekings.

“That will have to be part of the long-term solution,” he says.