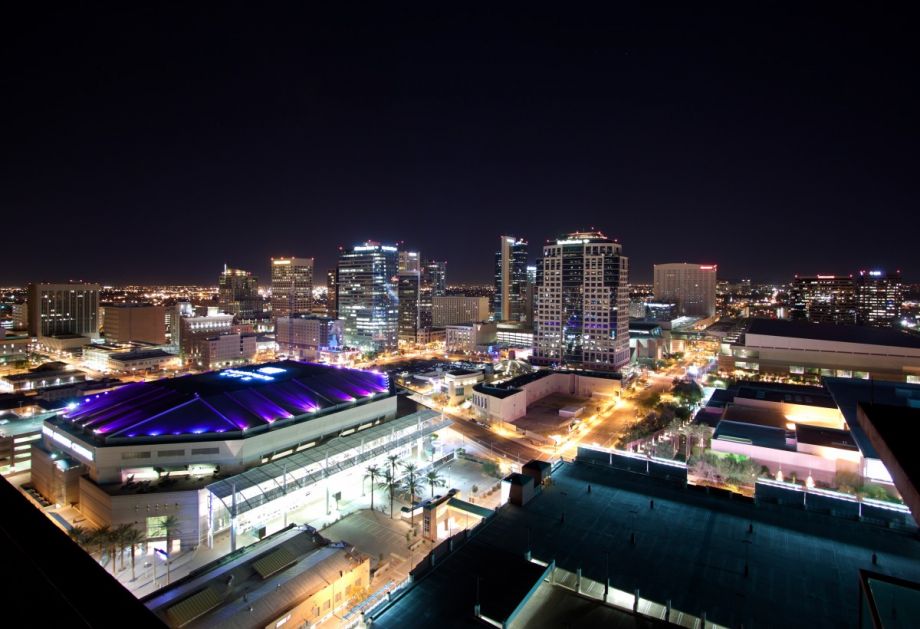 The U.S. Census today released its latest round of annual numbers tracking change in cities and counties across the country — and while people are flocking to the county housing Phoenix, a general trend of population loss has continued in the counties home to Chicago and Detroit and the city of Baltimore.

Maricopa County, where Phoenix is, this year replaced Harris County, Texas (home to Houston), as the county leading annual population growth. According to the U.S. Census, Harris County was “the largest numeric gainer for eight years in a row,” so Maricopa’s lead is notable.

Statisticians measure annual growth in three ways: net domestic migration (how many people move from other places in the U.S.), natural increase (births vs. deaths), and net international migration (how many people arrive from outside the U.S.) Maricopa primarily grew due to net domestic migration. King County, Washington, where Seattle is located, and Dallas County, Texas, home to Dallas, were also among the top gainers (measuring numeric change, not percent change). 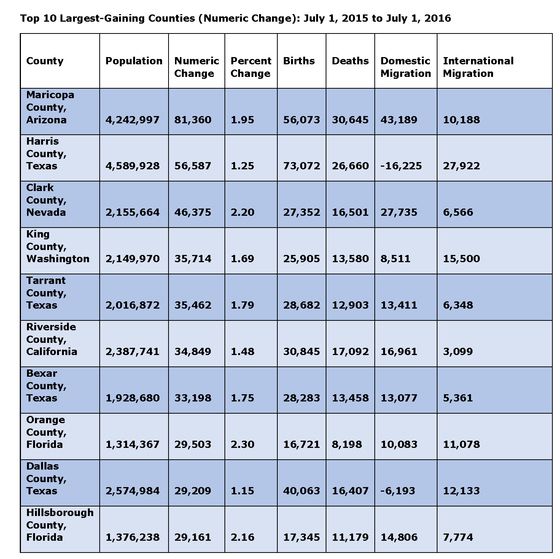 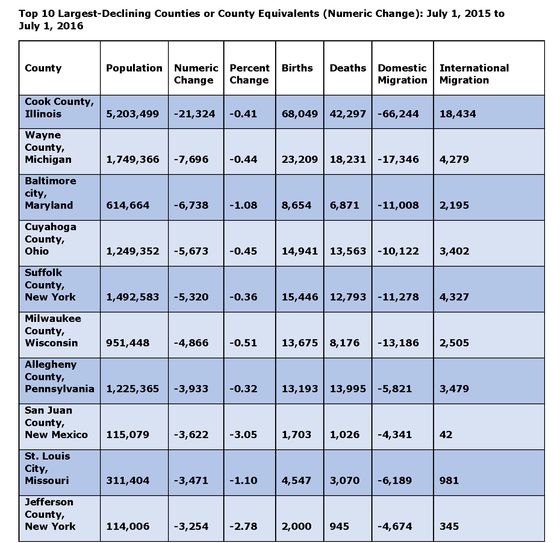 As the Chicago Tribune points out, this is the county’s second consecutive year of population loss — it lost about 11,000 people total in 2015. That was the first year it had declined since 1990.

“By most estimates, the Chicago area’s population will continue to decline in the coming years,” according to the Tribune. Over the past year, the paper “surveyed dozens of former residents who’ve packed up in recent years and they cited a variety of reasons: high taxes, the state budget stalemate, crime, the unemployment rate and weather.”

But the trend continues beyond Chicago and throughout the northern Midwest, the paper reports, to other Rust Belt cities like St. Louis, Milwaukee and Pittsburgh.

Baltimore’s population loss puts it near a 100-year low, according to the Baltimore Sun.

“The decline wiped out the city’s meager gains under Mayor Stephanie Rawlings-Blake, who sought to draw 10,000 families to the city,” the Sun reports. “And the loss came as the city grapples with rising crime, a homicide spike, a school budget gap and the fallout from the death of Freddie Gray.”

Some cities saw more modest numbers that still spoke to regional change. In New Orleans, for example, more people left than came for the first time since Hurricane Katrina.

New Orleans’ main source of growth in recent years has been domestic migration, according to the New Orleans Advocate.

“In 2011, for example, the city gained about 9,700 more people that way than it lost to other parishes and states, amounting to about three-quarters of the growth the city saw that year,” the Advocate reports. “At that time, some former residents were still returning home and many new residents were being lured in by the city’s culture or to work on the recovery with nonprofits and other agencies. But with affordable housing in scarce supply and nearly half of the city’s job growth coming in low-wage sectors such as hospitality and retail, the city may no longer have the allure it once did.”

A comprehensive list of the new data can be found here.