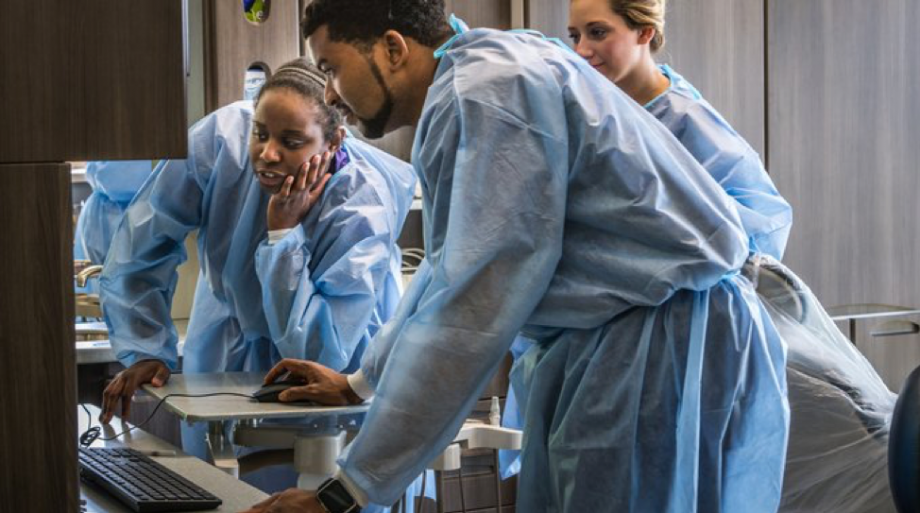 To step into the new Family Health Center in Kalamazoo’s Edison neighborhood is to experience what community health care should look like — for everyone.

Calming, light-filled waiting areas adjoin state-of-the-art exam rooms; dental chairs pivot to give patients a view of sky and trees beyond enormous plate glass windows. Social workers meet with each person who comes through the door to assess what factors, from unemployment to family dynamics, may be affecting their physical and emotional wellbeing. Mental health, physical therapy and a pharmacy, all onsite, mean people don’t have to shuttle across the city for services.

But the 50,000-square-foot facility, which opened last year on a former brownfield, represents even more than high-quality, free and accessible health care for a community with a poverty rate upwards of 58 percent, and a high incidence of chronic disease like diabetes and obesity.

“Before we opened, there were only three full-time dentists for an area population of 62,000,” said Eileen Chiang, the center’s energetic CFO. “This building sends a message to everyone who walks through the door: ‘Your health matters. You matter.’”

Before the Family Health Center opened last year in Edison, there were only three full-time dentists serving some 62,000 low-income residents in the area. (Photo by Fran Dwight)

The one-stop clearinghouse for medical, dental and mental health care is one of an array of investments — large and small scale — that have begun reenergizing Edison and bringing opportunities back to this eastside Kalamazoo neighborhood of 8,500 people that was once one of the most economically robust in the state. LISC has been investing in the Edison for more than 15 years, helping stoke economic mobility and community cohesion, and revitalizing buildings and blocks that declined over decades of deindustrialization.

The work is paying off, says Chuck Vliek, LISC Michigan’s longtime director, because “all of our activity spurs other development. That’s a big part of our case.” To date, LISC has injected some $19 million, leveraging more than $68 million for projects ranging from resident-led home repair and a farmer’s market to attractive affordable housing to cutting-edge facilities at Kalamazoo Valley Community College (KVCC). LISC’s contribution to the health care center alone included $8.5 million in tax credits. Interest in all these improvements has attracted another $193 million in public and private development.

Together with the Kalamazoo County Land Bank, LISC invested to build the Marketplace housing development, which transformed a former brownfield in Edison and created attractive, quality homes for residents there. (Photo by Fran Dwight)

The projects LISC supports have in turn, created jobs and entrepreneurial opportunities, prepared residents to fill quality jobs, and foster a climate of social connection and economic dynamism all at the same time. Their success has so impressed the City of Kalamazoo that earlier this year it designated $10 million for LISC to expand and deepen its inclusive economic development projects.

The federally-qualified health center, for one, has already employed some 140 workers, many of them native to Kalamazoo and trained through local medical programs. About a mile up Portage Street, Edison’s main artery, a gleaming new culinary and health education campus at the community college houses the country’s premier brewing school and offers degree and certification programs for everything from emergency medical technology to restaurant management to respiratory care. 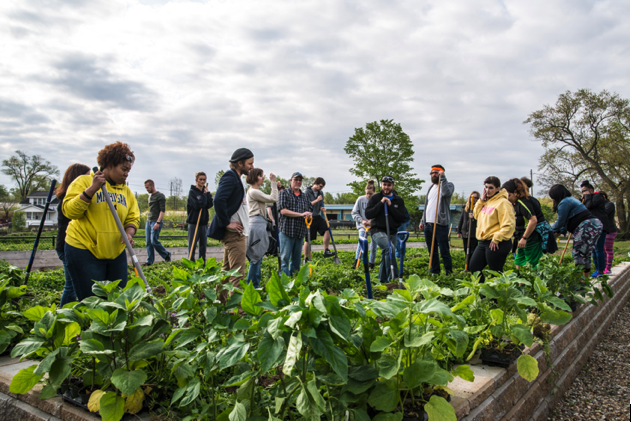 A class in organic farming at the new Center for Food Sustainability and Innovation campus at Kalamazoo Valley Community College. (Photo by Fran Dwight)

Nearby sits the equally stunning new Center for Food Sustainability and Innovation, which readies people for careers in sustainable food production. Both facilities, erected with LISC support, train Kalamazoo students for living-wage jobs in industries in serious need of skilled employees.

Before all this activity got underway, it had been a long time since the residents here saw any sign that they and their community mattered. Beginning in the late 19th century, Edison was a bustling nexus of Victorian homes and thriving businesses whose fortunes rose with those of the paper mills and pharmaceutical factories that flanked the neighborhood. But by the 1980s, most of the mills had shuttered, leaving tens of thousands of people without jobs. Edison’s middle class largely moved away, and those who remained had few prospects for work. Neighborhood stability fractured, crime became commonplace, and the PCBs that once poured from the paper mills seethed in brownfields that ringed the neighborhood.

In fact, all the players rooting for Edison say that essential to transforming the neighborhood is healing the land beneath it. “When the paper mills left, they took the jobs and left the poison behind,” said Gerry Hoffman, who moved to Edison as a child and still owns the turreted Queen Anne house his parents bought in the 1960s when his dad worked for the Upjohn pharmaceutical company. (In addition to being a paper-producing titan, Kalamazoo was the birthplace of the first dissolvable pill, and was also known as the Celery Capital, for the vegetable it produced in such great abundance.)

In order to break ground on the health center and the new community college buildings, millions of dollars went into removing toxins from the ground and the Portage River that runs through Edison. It’s an ongoing process, and part of building the Kalamazoo Valley River Trail that will eventually link the northern and southern halves of Kalamazoo. The trail will create a green circuit for walking, biking and playing.

Gerry Hoffman in front of the Queen Anne home his parents bought in the early 1960s, when jobs in Kalamazoo's then-robust economy were plentiful. Hoffman has volunteered with the Edison Neighborhood Association since its inception. (Photo by Fran Dwight)

As has also happened in scores of Midwestern neighborhoods that have lived through deindustrialization, a small group of residents — some born and bred in Kalamazoo, like Hoffman, and some more recent transplants — refused to give up on their home, a place with such deep history and potential.

In the 1990s, an ad hoc group of organizers formed the Edison Neighborhood Association, hoping to get their community back on track. “You couldn’t get any more grassroots than we were,” said Tammy Taylor, an Edison resident who has served as director of the association since 2001. Taylor and one half-time associate function as a full-on social service clearinghouse for residents looking for everything from food assistance to job training to the loan of a lawn mower or circular saw from the tool library. “We’re still trying to do a lot with a little,” Taylor said, after a lengthy phone call with a homeowner she connected to a subsidized roof repair program. Advice and financial support from LISC she added, has helped keep the association going.

For Taylor, a program she helps promote called Building Blocks is an example of the quiet but profound effect of neighborhood transformation that takes place street by street, and that is every bit as important as grander, more recognizable projects like the health center. Through Building Blocks, groups of residents on the same block receive small grants they can use to fund much-needed home and garden upgrades. The program, now in its twenty-third year, requires neighbors to decide communally how to allot the money, and to do the work together, too.

Toneesha Herrera found new purpose and connections in her neighborhood as a volunteer leader for Edison's Building Blocks program. (Photo by Fran Dwight)

Toneesha Herrera has lived in Edison for much of her life, and raised two children on Eggleston Street, where she owns a home. Several years ago, she volunteered to organize a Building Blocks project on her street. “Most of us are struggling financially in some kind of way,” said Herrera. “When I learned about Building Blocks, I was like ‘Oh my God, I can get a window!’” she recalled. “In the winter, most of us with leaky windows cover them with plastic and put up heavier curtains. But then your home is dark.”

Herrera got her window, and other neighbors got roof and porch repairs, fixed fences or added topsoil and landscaping to scraggly front yards. But just as impressive as the physical improvements were the social ties that formed and an emerging sense of ownership. Herrera met her best friend, a woman her daughter now calls “Aunt Amy.”

“People have pride in the neighborhood now,” said Herrera. “They’re not so afraid to come out of their house and say ‘hello.’” Herrera, in fact, was so moved by the program that she now leads Building Blocks in other areas of the neighborhood.

Assembling a scooter at Fido Motors and Cafe, part of a complex of repurposed industrial buildings in Edison that also house an auto mechanic, a welder, an electrician and the Kal-Tone Musical Instrument Co. (Photo by Fran Dwight)

The progress Edison has made, and continues to make, is the cumulative effect of many efforts and interventions over the long haul, says Mary Balkema, Kalamazoo County treasurer and president of the board of directors for the Kalamazoo County Land Bank.

“Community development is hard,” Balkema said. “It’s technical, it’s involved. You have to have fire in the belly to stick with it.”

That’s what partners like LISC bring to the endeavor, she said, explaining, “The role of an intermediary is to be the first money in, and then the private market will follow. We’re finally seeing that, but it’s taken 10 years.”

By purchasing and refurbishing buildings, making façade improvements and bringing better lighting and signage to the area, the partnership has attracted six new small businesses to the square and created an inviting public gathering space. Washington Square is now the site of a semi-regular “art hop” that brings residents and vendors out to the street for music, food and a key component of community-building: fun.

A young Edisonite enjoys the streetlife during a recent Art Hop along the newly refurbished Washington Square corridor. (Photo by Fran Dwight)

“Now,” said Balkema, “when people see Washington Square or the new health campus at KVCC or the new clinic they think, ‘what else can we do?’” They may also think, and understand, that Edison, and its residents, truly matter.