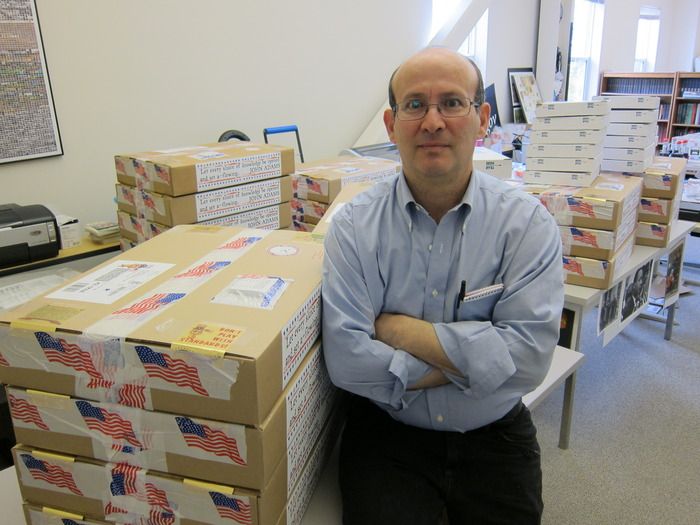 When is a Kickstarter campaign more than a Kickstarter campaign? In the case of near-legendary citizen archivist Carl Malamud, it’s when the campaign is also a bid to test whether the public has your back when you’re being sued by big organizations that develop the country’s health and safety standards. The lawsuit, Malamud admits, is “a little scary.”

The California-based Malamud has a long history of digitizing and making freely available on the Web everything from SEC records to files from the PACER court document system to congressional hearing videos. Since 2011, though, he’s focused on something even more esoteric: The public standards that govern, in the U.S., things like how buildings are built safely, how elevators are maintained, how fire hoses match up to fire hydrants from city to city, and much more. (Here, for example, is a PDF of the standards governing metal stepladders. Here it is after Malamud got to it.)

On September 28, Malamud kicked off a campaign to fund that work. He’s looking for $100,000 to continue buying standards, scanning them and having them converted into text-based documents, complete with redrawn graphics and formulas in Math Markup Language. The resulting files go up on the Internet, free for anyone to use. That’s only right, Malamud argues. Across the country, these standards have been “incorporated by reference” into law, and thus have the force of law — meaning, as he sees it, that the public should have unfettered access to them.

And for that, he’s being sued. In early August, three such standards development organizations, or SDOs — the National Fire Protection Association, the American Society of Heating, Refrigerating, and Air-Conditioning Engineers, and the American Society for Testing and Materials International — filed a lawsuit against Malamud and his organization, Public.Resource.org, for copyright and trademark infringement.

To the SDOs, the system works rather well. They take on the burden of developing standards, an obligation that in many other countries falls on government. They convene experts and build systems for collating and distributing these standards. They even offer limited free access. That process “yields great public benefit,” they argue in their filing with the U.S. District Court for the District of Columbia. Malamud is upsetting that system, they say, and they don’t want any money from him. They just want him to stop.

Malamud won’t. At least, not because of the lawsuit. What’s hampering him, though, is a lack of funds. In 2010, Public.Resource.org got a $2 million grant from Google as one of the “Ideas that Change the World.” Another million from Google followed, but the work process he’s developed, he says, is cost-intensive.

It’s not that the $100,000 from Kickstarter will do much to fund the organization. What it will do is affirm the value of unleashing standards at a time when major funding organizations are, per Malamud, “too risk averse” to support his mission. “I’m running out of my current grant money,” he says, “and I need to find a way to fund PublicResource or shut it down.”

So he’s turned to Kickstarter for funds that validate his work, so he can attract more funds to keep it going. “A lot of my job,” he says, “is not just putting standards up. It’s convincing policymakers that this is legal, that this isn’t just some scam I’m doing. So we have to make that point.” Being sued, he argues, doesn’t help. “It’s what we do for a living, and the lawsuit is saying that they don’t like what we do for a living.”

As Malamud sees it, there’s a natural public affinity for his work. “If you sit down at a bar and have a beer, and you say to the guy next to you, ‘I take building codes and I make them available on the Internet,’ everybody gets that issue,” he says. “The fact that the National Electrical Code should be available to read, everybody goes, ‘You’re damn right.’”

Indeed, he argues, the effect of these standards is felt on the ground each and every day, as well as in the pocketbooks of local governments. In a video posted by Malamud, the head building inspector for Sonoma County, Calif. testifies that the country spends about $30,000 during a code cycle buying copies of building code for staff.

So how has the campaign fared? From where Malamud sits, not all that well. He’s had 300 backers so far, and raised $19,000, with 18 more days to go. The way Kickstarter works, though, he doesn’t get any funds unless people chip in the full $100,000. “I wanted to see if people really are willing to stand up and say that the care about the issue,” he says. “I’m probably not going to make it.”