CannonDesign Hosts “Hackathon” For Solutions to Food Insecurity – Next City 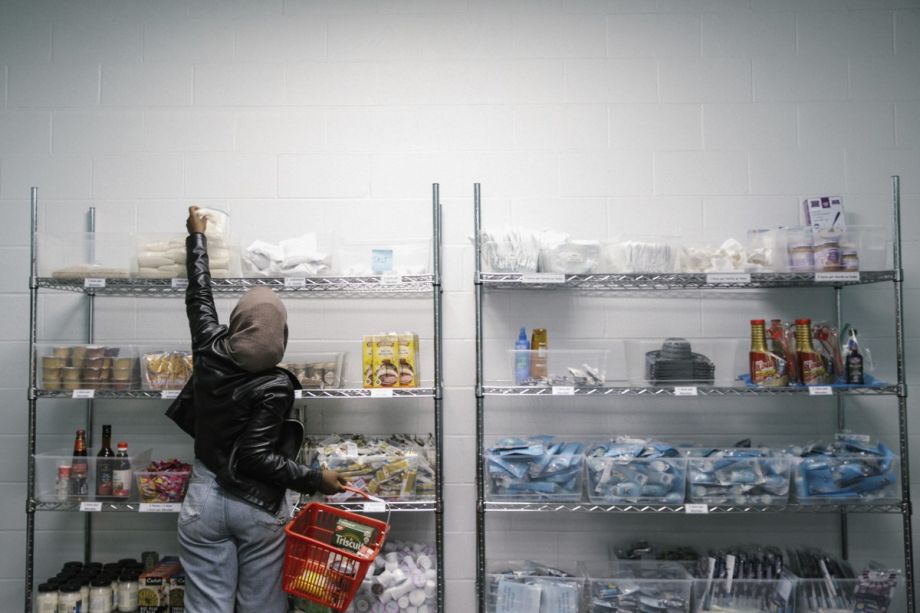 A student at a university food bank (Photo: Connie Tsang)

Those who don’t have access to enough healthy and culturally appropriate food are said to be experiencing “food insecurity.” Food insecurity can have devastating consequences that ripple outward and touch entire communities—it leads to poor health outcomes for all ages, students struggle to concentrate at work and school, and adults may skip meals so kids can eat or leave important bills unpaid to afford food.

Like so many of the world’s so-called “wicked problems,” food insecurity has many causes and can’t be solved by one idea or one person, no matter how brilliant the idea or the person. So in September, global Living-Centered design firm CannonDesign hosted a “hackathon,” uniting dozens of the finest minds working on the issue in the St. Louis metro region to put their heads together to formulate possible solutions and remedies. The hack builds on CannonDesign’s national event series that has tackled other topics including mental health, equitable development and the future of education.

Lots of factors contribute to food insecurity—distance from grocery stores and access to transportation, finances, food prep knowledge to name just a few. Help can come with stigma and doesn’t always come in appropriate format (Ex: a box of pasta is great unless you have celiac disease). According to Operation Foodsearch a participant in the hackathon, one in six people in the greater St. Louis region lives in poverty and struggles with hunger—including more than 172,000 kids.

During the pandemic, food insecurity is spiking alongside unemployment nationwide. Survey data from the Census Bureau shows 1 in 10 American does not have enough food, and that food insufficiency among children has risen over the summer. The St. Louis area Food Bank has reported a 43% increase in demand, with 68% of its visitors seeing assistance for the first time. The food bank is averaging 5 million meals a month and has provided more than 26.7 million from March 16 – Aug 30.

Hackathon participants spent a Monday afternoon divided into teams and took on four identified possible lanes for solutions: creating more access points to food, identifying and converting vacant spaces into food-producing spaces, connecting food insecure citizens with resources as they need them, and providing financial services and tools for low-to-moderate income people to maximize their ability to find fresh food.

Within the smaller groups, brainstorming and even a little of the improv-style “yes, and” sharing and building method highlighted what’s already being done, as well as brought to light a few hidden pitfalls to work around.

An illustration from the hackathon (Courtesy CannonDesign)

“What really knocked me out was the sheer number of things going on in St. Louis, that even people in the room weren’t aware of,” Eric Corey Freed, event co-facilitator and Director of Sustainability at CannonDesign said after the event.

LINK Market works to bring fresh food options source from local farmers via small kiosks to transit stations that are otherwise seas of concrete in areas that can’t support an entire grocery store. Operation Food Search and the Missouri Coalition for the Environment glean fields after harvest, making fresh produce that would otherwise be wasted available. There are urban farms quietly germinating in individual backyards or neighborhood lots. And GiftAMeal is a restaurant-supported platform that allows diners to easily purchase meals for those in need while they’re dining out, simply by snapping a photo.

Armed with these and dozens of other ideas, the groups came together to generate and refine new solutions.

One of the hackathon groups realized that both financial literacy and food knowledge tend to be intergenerational—many people wind up banking where our parents bank and cooking Grandma’s treasured recipes. They started asking the novel question of how to combine this pathway to address food insecurity on two of its fronts—financially, and through food knowledge.

The ubiquity of smartphones generated ideas for building off existing technology. The Streetwyze app, which allows users to map out their own neighborhoods in real time, was mentioned as “Yelp for food deserts.” While St. Louis isn’t yet a user of the app, it could be—or the best of it could be used to build from, finding real-time ways to share trustworthy information about available food.

Technology can help bridge knowledge gaps, too. There are plenty of steps between rutabaga and stew, and those steps might not be obvious to the recipient of a produce box—but a scannable QR code leading to that information could easily and inexpensively be added to the box, and a quick click could answer the question.

Speaking of food boxes, it’s all well and good to get food to hungry folks, but if they don’t have a refrigerator or a kitchen, what becomes of what’s not immediately eaten? One participant proposed sharing the space in public school kitchens—after all, they aren’t in much use after the end of the school day.

Most groups addressed on some level issues of stigma and trust. Longtime backyard growers don’t immediately feel they can work with a nonprofit who’s just entered the neighborhood—that particular sticking point requires time to build trust.

During the uncertain times brought on by the pandemic, people who have never visited a food pantry before are doing so, and it’s tough to predict when or if that will change. The ideas of simple how-to videos about visiting a pantry arose, as did the idea of hosting pantries at grocery stores, where people are already going for food.

At the day’s end, each subgroup presented their ideas—and everyone expressed an interest in keeping the conversation and the energy going. CannonDesign is now focused on selecting the best ideas surfaced and building action plans to make them a reality. If you’re interested in learning more or supporting the initiative, reach out to CannonDesign.

“There was no shortage of enthusiasm,” said Freed. “The energy level on the call was the same at the end of the call as the beginning.” No mean feat, as anyone who’s recently experienced Zoom fatigue (so, pretty much everyone working remotely!) can attest.

In a mid-sized city like St. Louis, many of the people working in a given sector know one another, but there’s nothing like sharing space and mixing it up to create new connections. “It’s such an opportunity to have all those big brains focusing on those questions at the same time,” Freed says.