Can Zoning Actually Save Manufacturing Space in San Francisco? – Next City

Can Zoning Actually Save Manufacturing Space in San Francisco? 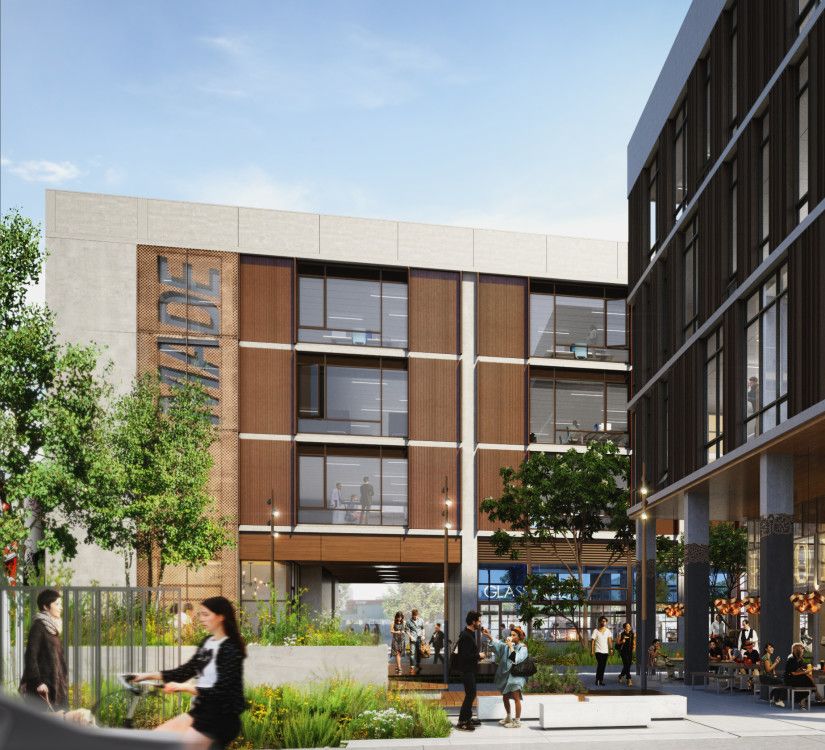 A rendering of the new Manufacturing Foundry at 150 Hooper. (Courtesy of PlaceMade)

Kate Sofis characterizes her childhood taking place in “a kind of dying rust belt city, Buffalo, New York, in the ‘70s.” Growing up, she witnessed unemployment rise within her family as the city’s main employers, General Motors and Bethlehem Steel, closed up shop. “I had this sort of PTSD seeing that as a kid,” Sofis says. “You would have thought it would have driven me as far away from manufacturing as possible.”

It didn’t. Sofis is the founding executive director of SFMade, a non-profit launched in 2010 to support local manufacturing in San Francisco. Despite commercial rent control being prohibited by California law, she has spearheaded an initiative to build affordable commercial space in San Francisco by borrowing from the affordable housing playbook.

As a result of her efforts — a complex, several-year process to change zoning and secure funding — this week SFMade will officially open the Manufacturing Foundry at 150 Hooper, a 50,000-square-foot multi-tenant, manufacturing space owned by the non-profit.

Sofis left a career in the computer manufacturing industry in the midst of the dotcom recession, wanting to figure out “how to remove barriers to growth for native manufacturers.” At the time, she says, “people thought manufacturing in the U.S. was done.”

Working with SFMade’s first board chair Mark Dwight and founding chief program officer Janet Lees, the team assembled a small group of manufacturers left in San Francisco, from a garment manufacturer to a brewery. By the end of 2010, the organization had engaged 105 manufacturers, providing brand assistance, educational workshops and advising services.

By 2012, SFMade noticed two things: finding manufacturing space in San Francisco was becoming more difficult, and manufacturers were increasingly competing with each other to secure it. The industry was growing as the city became more expensive, with industrial space increasingly converted to residential use.

The city had passed the Eastern Neighborhoods Plan in 2009 to protect industrial zones in the east side of the city. In 2013, SFMade began discussions with city government to see how it might be able to build more.

The result was an innovative zoning Sofis calls “inclusionary industrial zoning.” She says, “It takes from the playbook of affordable housing, building market rate to help pay for below market.”

The zoning identified around a dozen vacant industrial parcels close to downtown San Francisco in which a developer could build office space — not previously allowed on industrial sites — if they agreed to include industrial space, with plans to keep it affordable.

“It was the number one reason we could develop the first of those parcels,” Sofis says in regards to 150 Hooper.

150 Hooper is part of a larger campus called 100 Hooper, built by for-profit developer Kilroy Realty Corporation. An agreement with the developer transferred ownership of 150 Hooper to SFMade.

Because there’s no easy metric to qualify companies for affordable space, like area median income does for affordable housing, the role of a non-profit is crucial. “By having a non-profit control the industrial parcel, we can choose to suppress the rent,” Solis explains. It’s an industrial real estate model reminiscent of the Brooklyn Navy Yard or Greenpoint Manufacturing & Design Center in New York City, or the Industrial Council of Nearwest Chicago.

To fund its development, SFMade secured a $23.4 million New Markets Tax Credit allocation from the San Francisco Community Investment Fund. Jamie Querubin, chief operating officer for the fund, calls it a “historic” investment, as their typical allocation ranges between $10 and $15 million. “We felt it would really be a catalyst for economic development in that neighborhood,” Querubin says.

SFMade has already signed leases with a variety of tenants, including screen printers, an apparel company and medical device makers. Humanmade, a non-profit that will provide affordable access to industrial equipment alongside classes, job placement services and business development training, will be the building’s largest tenant.

“The idea is to expand the network and community to people who otherwise wouldn’t have the means,” says Humanmade founder Ryan Spurlock. “By subsidizing access, it’ll allow for a much more diverse community.”

All those who are a part of 150 Hooper stressed the importance of affordable manufacturing space in a city, even one in a housing crisis. “These are companies that support living wages in San Francisco,” Spurlock says.

“We need a more robust dialogue at the city level and beyond, that [affordable housing and manufacturing] are inextricably connected,” says Sofis. “You can’t promote one and not think about the other.”

“My top priority is to build more housing so that low and middle-income San Franciscans can continue to live in this city,” Mayor London Breed told Next City in an email. But she notes that “as we do this, we must also create and protect spaces for the manufacturing industry and the small businesses that make the very goods we consume and use, every day.”

With traction in San Francisco, SFMade is looking to the rest of the Bay Area to promote manufacturers and help them secure affordable space. The organization started a subsidiary, PlaceMade, to focus on the real estate holdings in the area, Sofis says.

“Increasingly we are finding developers across the region who are excited about including manufacturing as part of their projects,” Sofis says.

Funding will continue to be a challenge, she notes, particularly for nonprofits to own manufacturing property and control the rents. “We have to look at cities creating some sort of affordable industrial trust, similar to the way we have trusts for housing,” Sofis says. “It will give organizations somewhere to start, with some equity to bring into the deal.”

Because as cities scramble to develop housing, she notes, “it would be a big mistake to redevelop all our industrial land to housing. Because when you redevelop industrial space, you don’t get it back.”