Can Too Much Infrastructure Doom a City? – Next City

Can Too Much Infrastructure Doom a City? 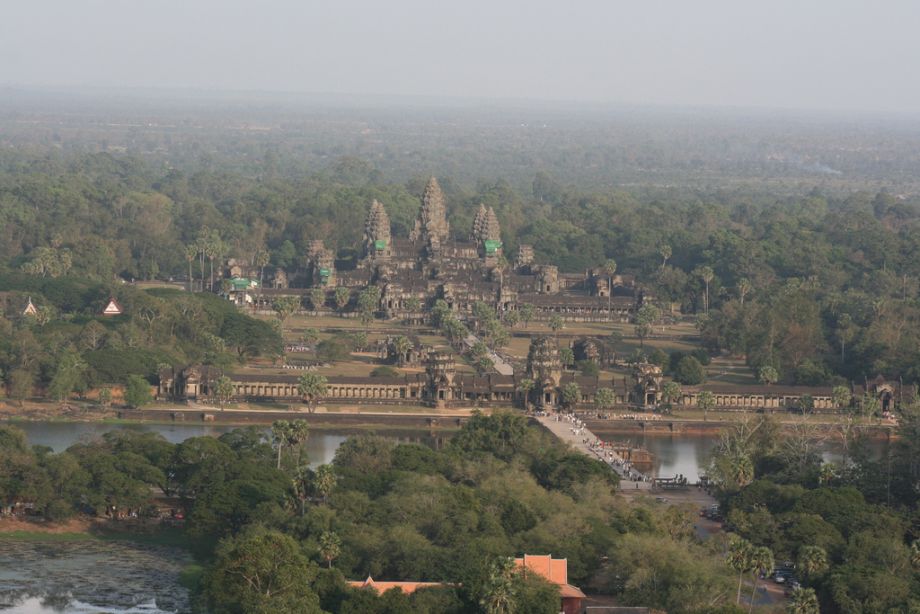 In 2012, an international team of researchers conducted a groundbreaking 370-square-kilometer aerial survey of the mediaeval city of Angkor and several of its satellites in north-western Cambodia. Founded in the 9th century, Angkor was the seat of an empire that had conquered most of mainland Southeast Asia by its height in the 13th century. With the famed temples of Angkor Wat and Angkor Thom forming its nucleus, the city of Angkor would eventually cover an area of more than 1,000 square kilometers. Housing an estimated one million people, it was the largest preindustrial settlement in the world.

Widespread drought, the failure of Angkor’s intricate hydrological system and the ascension of the Ayutthaya kingdom in present-day Thailand would contribute to the empire’s demise in the 15th century. While Angkor’s stone temples remained places of worship, the city’s reservoirs and canals would be neglected while its thousands of wood, bamboo and thatch dwellings were left to rot until nothing but overgrown piles of dirt remained.

The 2012 survey employed the use of a helicopter-borne laser – known as “lidar” – that allowed researchers to peer through the region’s thick vegetation to see surface impressions of Cambodia’s once-thriving mediaeval cityscapes. The results were astounding. In addition to pinpointing the exact location of a 1,200-year-old city that had eluded successive teams of scholars since the 19th century, the survey also revealed the extent of Angkor’s urban periphery. By rendering the lidar data as highly detailed three-dimensional maps, researchers were finally given an accurate bird’s-eye view of the long-vanquished Angkorian Empire’s complex transportation and hydrological networks, as well as the regularly spaced mounds that marked former human habitations.

These maps confirmed what researchers had long suspected: the city of Angkor was characterized by a densely populated core surrounded by a sprawling urban periphery. Such settlement patterns, which were relatively uncommon in the preindustrial world, have become a defining characteristic of contemporary urbanism. By studying places like Angkor, Cambodia-based researchers are hoping to show how modern cities can become constrained by their infrastructural legacies, thus limiting their ability to adapt to environmental and population pressures.

Ground excavations are currently underway in and around Angkor, and the team of researchers, which is headed by University of Sydney archaeologist Dr. Damian Evans, is in the midst of raising funds for a second lidar campaign. Next City recently sat down with Dr. Evans to discuss his research and its implications. His team’s findings can be found in the Proceedings of the National Academy of Sciences.

You have described Angkor as a large, low-density city. Was this common in the medieval and ancient worlds?

The lidar data revealed Angkor’s formally planned urban center in stunning detail, with grids dividing the urban space into what look like city blocks. It also showed that this downtown area was only one part of the picture. That is, the neat grid patterns of city blocks bled into the landscape beyond the walls and moats of the stone temples that defined the center of the city, giving way to a less-structured, less-formally patterned agro-urban space where dwellings and local shrines were interspersed among rice fields and so on. This agro-urban fringe around Angkor was vast, but a substantial amount of the Angkor plain – somewhere between 1,000 and 1,500 square kilometers – was functionally tied together by a complex network of infrastructure, such as roads and canals. It was an operational whole, with each part being functionally interdependent.

Most of the famous cities of antiquity were not like Angkor. Classical Rome, for example, would have had as many people as Angkor at its height, yet it would have fit very comfortably within one of Angkor’s huge reservoirs. Low-density megacities like Angkor tend to be characteristic of civilizations that flourished in tropical regions, for instance, in Southeast Asia and Mesoamerica, although Angkor is by far the largest of its type.

How do such cities develop? Was Angkor’s shape intentional?

What we see in the archaeological record at places like Angkor is the end product of several centuries – sometimes millennia – of continuous urban development in the same area. What we are looking at then is a messy and chaotic aggregation of urban spaces, parts of which may have been purposefully laid out by different regimes for specific reasons, and parts of which developed organically and haphazardly as the result of countless decisions made by individuals.

One of the key challenges to living in the tropics is the sharp seasonality of the rainfall, such that you have too much water for half of the year and too little for the other half, as well as highly variable rainfall from year to year. The success of civilizations in the tropics thus hinges on their ability to develop and implement technological solutions to the core problem of water supply, and by extension food security. At Angkor they solved this – at least for a time – through massive infrastructural works such as huge reservoirs and canals, as well as the construction of many thousands of communal ponds. Such projects take up huge amounts of real estate, and the city inevitably expanded to accommodate them.

One of the laser images used to map the ancient urban landscapes hidden beneath centuries of forest growth. Credit: Damian Evans

Are large, low-density cities common today? Is Phnom Penh this type of city?

Since the twentieth century, extensive low-density cities with poorly defined edges have become a defining characteristic of urban life, and certainly Phnom Penh exhibits many of these characteristics. Phnom Penh is a fundamentally low-rise, low-density city whose rapid growth in the past couple of decades has been marked by dramatic extensification. It is if course by no means comparable in scale to the vast urban agglomerations surrounding cities such as New York or Tokyo – for which Jean Gottman employed the term “megalopolis” – but in recent years, we have seen a process in which Phnom Penh has expanded and subsumed nearby villages and towns, and aside from large bodies of water and arbitrary administrative boundaries, it has become very difficult to establish exactly where the limits of its urban sprawl are.

You have said that these types of cities can become constrained by their infrastructural legacies. What does this mean? And how does a city’s structure relate to the concept of urban resiliency?

Archaeological evidence indicates that towards the end of the Angkor period, engineers were struggling to maintain their vast and incredibly complex water management system. This system had problems throughout the Angkor period, and we see evidence of things going wrong pretty much all of the time. If one part of the system – for example, one of the huge reservoirs – failed, then engineers would usually endeavor to build something bigger and better nearby. Eventually, however, real estate in the central part of Angkor became so scarce that engineers no longer had such options, which occurred just when the region experienced a series of mega-droughts and major social upheavals. In some cases, material culture – such as the large-scale infrastructure that is necessary to give functional coherence to sprawling low-density cities – becomes a liability and a constraint insofar as it is massive, inertial and quite unable adapt to rapidly changing circumstances.

In other cases, cities that were originally of modest size or high density grow incredibly large without appropriate planning and end up with in-built systematic weaknesses. That is, they carry a built-in vulnerability to social and environmental changes, even if – as we can see at Angkor – the populations sometimes manage to survive within a highly problematic situation for several centuries by implementing stopgap solutions.

Are there lessons from your research at Angkor that can be applied to cities like Phnom Penh?

It is important not to draw naïve parallels between the past and present. These days, we have an enormous suite of technological solutions that we can bring to problems of urban sustainability, and we also have a much greater understanding of the environmental processes that give rise to challenges that are both direct (such as flooding) and indirect (such as social upheavals caused by natural disasters). Nonetheless, in broad terms, it is interesting to be able to identify some common strands which seem to run from the past to the present. One of the things we see quite clearly at Angkor is the apparent lack of a coherent long-term master plan, with each successive ruler embarking on massive, ad hoc programs of urban redevelopment that eventually left the structural form of Angkor maladapted to the social and environmental challenges it faced towards its end. In Phnom Penh, a lack of a coherent vision for the growth of the city, weak governance and poor enforcement of existing regulations all conspire to produce an urban landscape that is expanding rather chaotically and without the kind of infrastructure – such as a mass transport system – that is required to sustain it.

When it comes to urban resiliency in Phnom Penh, however, the main issue is water – an issue that is particularly important in the face of contemporary climate change and the kinds of extreme weather events that have become increasingly common in recent years. As with Angkor, the entire city of Phnom Penh straddles broad floodplains and a cascading system of lakes which provide natural systems for water filtration, managing sedimentation, flood control and even waste management. Many of the main boulevards encircling the urban core of Phnom Penh were once dykes that defined the outer limits of the city, yet rapid and uncontrolled development and urban sprawl, combined with the filling of water bodies due to the immense value of the land to developers, has already substantially upset the delicate balance between water and human habitat, and has thus created a requirement for increasingly expensive technological solutions to mitigate very serious problems with flooding.

Broad visions for the future of Phnom Penh – and there are many – will not be useful without effective implementation and proper oversight. However, I think it would be naïve to say that Phnom Penh is “doomed.” The knowledge of how to build cities sustainably is there, as are the technologies to do so. It is simply a question of will, making resources available and being able to implement solutions before doing so becomes prohibitively costly. Archaeology, however, shows us very clearly that civilizations frequently don’t take rational or sensible courses of action, even when they have the information and the wherewithal to do so. In mediaeval Angkor, for instance, the standard response to the failure of one part of the water management system was not to do things differently, but rather, to re-engineer the same thing in a different location, only larger. Meanwhile, the feeble response worldwide to the challenges presented by climate change shows that the failure to learn from the mistakes of the past – not to mention a misplaced faith in technological solutions to problems that could have been avoided in the first place with careful planning – is not simply a local problem.