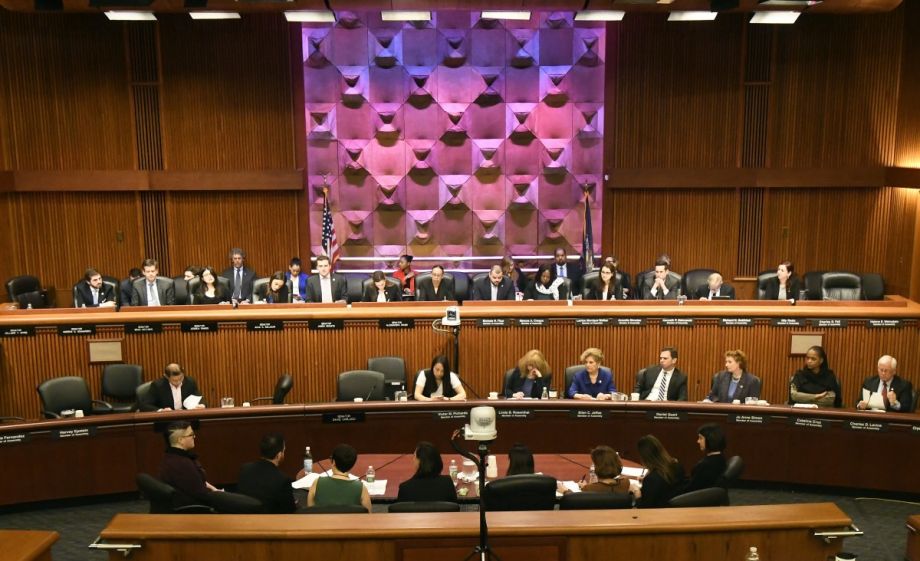 The thing about the Bill Cosby trial that stood out for Laurie Girand, was what she recognized as a pattern in which an intention of protecting people was preventing the victims from organizing.

She had seen it before, in her life as an activist around food safety concerns after an incident involving her daughter in the 1990s. The victims, she says, were kept isolated from each other. “Their shared experience was not presented as a pattern but as a one-off. Everything’s a one-off,” she says. The lack of contact between victims also prevented them from supporting each other.

“It took decades to put these cases together and actually get justice. I thought, ‘Wow, this seems like we could overcome this situation,’” Girand says.

So this time around, she took her background in information technology and, along with her husband, developed “I’m With Them,” an online tool that aims to support victims of workplace sexual harassment. It works by allowing people who have experienced sexual misconduct in the workplace to report the incident, and if there is a “critical mass” of people reporting incidents with the same person, the site enables them to connect. Girand says that three reports would be enough to constitute a critical mass.

“Women who say they’ve experienced sexual harassment at work are 6.5 times more likely to change jobs than women who have not – often to a job of lower quality or with lower pay,” says Sarah Felisch Fink of the National Partnership for Women and Families.

The #MeToo movement has made workplace sexual harassment a national conversation. Actors like Mira Sorvino lost out on plum roles and fat paychecks. For most women, the reality of losing work or changing jobs due to sexual harassment involves significant financial stress and disruption, according to research from the National Partnership for Women and Families. Those consequences contribute to maintaining a gender wage gap that is even greater when race, sexual orientation and disabilities are factored in. For example, while white women make an average of 79 cents for every dollar a man earns, black women earn 63 cents, Native American women 57, and Latina women 54.

A 2018 survey conducted by Stop Street Harassment found that 81 percent of women and 43 percent of men had experienced sexual harassment or assault during their lifetime.

A study from the University of Massachusetts-Amherst from 2018 found that 99.8 percent of those who experience sexual harassment at work never report it.

“We cover the entire spectrum of harassment, and we focus on harassment more than on assault, but we … accommodate the entire range,” Girand says.

The site asks the victim to characterize the incident. “We want them to be in control of it because our users are our highest priority,” she says.

“We don’t share any information about the perpetrator themselves or about the incident,” Girand says. “We algorithmically determine that you’ve had an experience with the same person that somebody else has had.”

Once this has been determined, the user’s email address and name are shared with other victims. “That’s all we share,” she says.

Still, some observers raise flags. “Most of the women are going to have major privacy concerns,” says Rick Rossein, who teaches employment law at the City University of New York Law School.

In order to register with the site, users are asked for their name, email, the last four digits of their social security number, their birthdate, home address and a cell phone number in order to verify their identities. According to Girand, the site only retains the name, year of birth, email and cell phone once this process has been completed.

“That’s a lot of personal information. I think a lot of people are going to say: ‘This is not worth it. I don’t know who this organization is.’” Rossein speculates.

Asked about the possibility of hacking, Girand says that I’m With Them has “studied well-known industry lapses, and we’ve basically put in place policies, processes, mechanisms, software, systems, pipelines to reduce the possibility of any breach.” For example, credit cards are processed by a third party.

Rossein pointed out that in spite of the spotlight on sexual harassment that the #MeToo movement has brought, the numbers of reports have remained low. The I’m With Them site, he suggested, could help with the issues of bystander and victim silence.

In coming up with the I’m With Them concept, Girand also sought advice from Emmeline de Pillis, who teaches business at the University of Hawaii.

“I honestly can’t see any vulnerabilities or flaws that aren’t inherent in any web site,” de Pillis says, describing the site as a “measured” response to the issue of sexual harassment. “It just connects people,” she says — and connecting, de Pillis says, gives people an opportunity to decide for themselves how to move forward and support each other.

I’m With Them doesn’t provide direct assistance with the next step — finding the resources to fund the legal and public relations work that go along with coming forward and taking action as survivors of sexual assault, harassment or abuse. There are other sources for that, however, such as the Time’s Up Legal Defense Fund. (Next City reached out to the fund, but no one was available to comment for this story.)

The I’m With Them site does offer information about where victims can file complaints about their experiences, including with the Equal Employment Opportunity Office and company human resources offices.

Joseph Olivares, a spokesperson for the Equal Employment Opportunity Office, urged victims to report incidents in a timely manner since the window is generally 180 days from the most recent occurrence. “It’s important for people to speak out,” says Olivares, praising efforts to raise awareness around sexual harassment issues.

Yet awareness doesn’t always mean acting to support victims, Rossein points out. Human resources departments, for example, haven’t distinguished themselves in this regard.

“I’m not sure that’s changed,” Rossein says. “It is true that many human resources professionals and organizations are talking about it more and there is pressure to do something about it, but the fact remains that human resources works for the boss.”