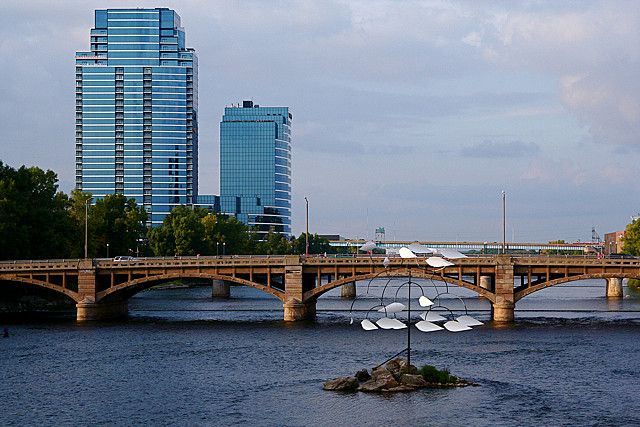 Two Michigan outdoors enthusiasts are primed to put the rapids back in Grand Rapids.

It’s been over a century since the Grand River, which snakes through the downtown of the northwestern Michigan city, had actual rapids. Last month, the river was one of 11 cities added to the Urban Waters Federal Partnership, an EPA program designed to restore urban waterways, support local businesses, increase recreation and protect Americans’ health.

The Grand River is Michigan’s longest river, stretching 252 miles from Lake Michigan to Hillsdale county, in the center of the state. It used to have rapids, but they were long gone by the early 1900s after the river was scraped and flattened so loggers could float timber better downstream.

So Chris Muller (a real estate developer) and Chip Richards (a stay-at-home dad) started the Grand Rapids Whitewater non-profit to bring the rapids downstream again. The proposal calls for modifying five dams and installing boulders, as big as 10-feet wide, in the 2 1/2 mile stretch of river downtown. It had early support from Republican governor Rick Snyder and democratic U.S. Senator Debbie Stabenow voiced her excitement when the 11 new cities for the Urban Waters initiative were announced on May 10.

But what does whitewater rafting and kayaking have to do with economic development? Isn’t it just a scant few jobs for college kids and retired high school geography teachers who like working in the fly fishing shop during the summer? I called Muller, who envisions a more robust downtown Grand Rapids after the $27.5 million restoration project is completed, to see what he has up his sleeve.

“If you drive down parts of the riverfront, in the area where we’re focusing, businesses have their dumpsters backed up to the river as opposed to their front doors, so that’s really backwards,” he said. “And I think having that kind of mind frame change will reveal itself in better development and redevelopment along the river. Historically most people who benefit from river restorations, 9 out of 10 of them never actually get wet.”

They’re currently undergoing an economic impact study, but it’s hard to underestimate the outdoor recreation economy, which provides 6.1 million American jobs and rakes in $646 billion in spending each year, according to a study from the Outdoor Industry Association. We can poke fun at the floppy hats and camo vests in fishing stores all we want, but fishers and kayakers spend money.

Proponents of the Grand River restoration hope that it will, as Muller suggested, spur economic development downtown. I’m all for an increase of restaurants and bars in downtown Grand Rapids, whose metropolitan area boasts over one million people — not for the craft beer and farm-to-table meals, but because the service industry offers lots of jobs with good wages for people who may not have attended college or do have a degree and are struggling to find work in their field. I’ve spent a lot of time working in restaurants, and if your feet can handle it — and your family is OK with the hours — it’s a good way to make a living.

The city’s downtown development authority has raised over $100,000 and other private funders have backed it as well, according to the Wall Street Journal. But that’s well short of the proposed budget. Muller said the exact financing is still being worked out, but cited the area’s fervent philanthropy as a harbinger of success. “I think a significant amount of money will come from foundations and private individuals,” he said. “It’s really hard to say what this will be. It’s probably, maybe, a quarter federal and then a portion of maybe some state funds or grants and then the rest of it foundational support.”

The Urban Waters partnership started with seven cities in June 2011, so it’s hard to gauge if it’s a wild success just yet. If you want to measure it by health initiatives, the Bronx and Harlem River watershed seem to be making good on their promise. And I’m a big advocate of the approach to their new public health partnership, who distributes their outreach materials on bilingual flyers.

I do think it’s a smart way to develop cities in theory. It’s green space that can be used for recreation and, with the right zoning, small businesses dotted along the water. If each municipality is smart, they can get public schools involved in water sports in the spring and early fall. And, more than anything, it’s really a three-pronged approach to development. It’s not just some big gleaming office tower or outdoor mall. There’s opportunity for retail, restaurants and the recreation economy. I do a lot of running and outdoor activities (and used to work in a bike shop), and I can’t stress the recreation economy enough. These people spend money, and lots of it.

But, just like every redevelopment project, it comes down to the money. Michigan is in no position to pour $25 million into a river, even if it does mean an increase in jobs. Let’s hope those philanthropists Muller mentioned open their checkbooks. There’s a chance for smart, robust development downstream.