Can “Nano-Enterprises” Bridge the Foodie Class Divide? – Next City 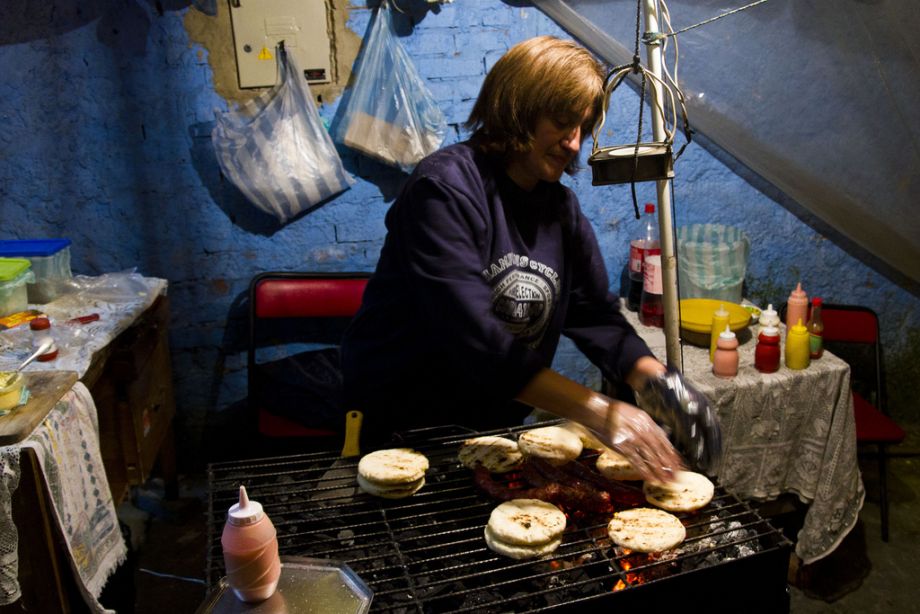 To your average greenmarket cilantro-sniffer, being a foodie is about buying local and eating fresh. To Canadian chef Brian Johnston, it’s a way to turn the poor into entrepreneurs.

On April 24, Johnston was in Medellin serving up kimchee and bibimbap at a Korean food night to benefit his budding social project, Via Cocina (Food Train). The aim of Via Cocina is to do something foodies the world over have long grappled with: pull the movement down from high-end cuisine’s lofty rafters, and put it to work fixing difficult social issues. In that spirit, Via Cocina has a two-pronged strategy to teach low-income people how to prepare tasty and healthy food so they can eat it – and then, so they can sell it.

Here’s how it works: Via Cocina will help participants set up what Johnston calls “nano-franchises” – “one person, one product” eateries set up in outdoor arcades in impoverished neighborhoods. The focus is on fresh, healthy, sustainable foods: in-season vegetables, whole grains, lean meats. According to Johnston, these nano-franchises will be run as collectives, with individual stallholders offering different but complementary dishes at a price of between 1,000 and 3,000 pesos ($0.50 to $1.50 USD) with profits shared among them.

“If someone can get 20 or 30 customers per day, at one or 2,000 pesos, that’s a sustainable business model for a lot of people that can offer more than minimum wage,” says Johnston. (In Medellin, many people earn less than minimum wage of 616,000 pesos, or $322 USD, per month).

Johnston believes teaching people to develop savvy business models is the missing link when it comes to putting sustainable eating in the hands of the poor. For instance, Via Cocina trains street vendors to estimate the overhead that goes into their dishes before they set their prices. The program also emphasizes that, in a city where hawkers are everywhere, marketing is key. “A lot of people will… pour their money into the business itself, but not its profile in the local area,” says Johnston.

More broadly, marketing also means changing the image of healthy food in Medellin, a city that loves its empanadas and buñuelos (a deep-fried ball of cheese-flavored dough). “The food that’s popular right now… is junk food. We’re just starting to see the arrival of a more open food culture, but we’re still not very accustomed to trying new things,” says Sebastian Lopez, a chef at one of Via Cocina’s partner restaurants, La Ventana. “There’s a stigma around healthy food – that it has no taste, that it’s just plants. That’s something that we want to change, too.”

Johnston’s passion for promoting healthy and sustainable eating among poorer communities, as well has his knowledge of international cuisine, comes from stints volunteering overseas in Asia and Africa. But it’s Medellin’s position as a rising world-class city with a consistent climate that made him decide to establish Via Cocina here.

“There’s a lot of interest among tourists in sustainability and social projects these days,” he says. “Here, there is basically no high and low season for tourism (because of the climate), so people working in my project can benefit from tourism all year round.”

Right now his biggest problem is securing a steady stream of cash. To date, the venture has been kept afloat by fundraising, donated spaces and the good will of enamored food-industry professionals. He’s seeking funding from Grand Challenges Canada, a scheme backed by the Canadian government to promote better health in low- and middle-income countries. He estimates that a proper training facility would cost $125,000. “To really get this project of the ground, that’s what I need.”

In the end, however, it’s clearly not about the money for Johnston, who left a good job to bring sustainable food — and sustainable business models — to the masses. “I could focus myself on the upper-class population and make a lot of money,” says Johnston. “But I grew up in a low-income neighborhood in Toronto. I know what it’s like to have nothing. Cooking has given me the chance to escape that, and that’s a chance I want to give to other people.”