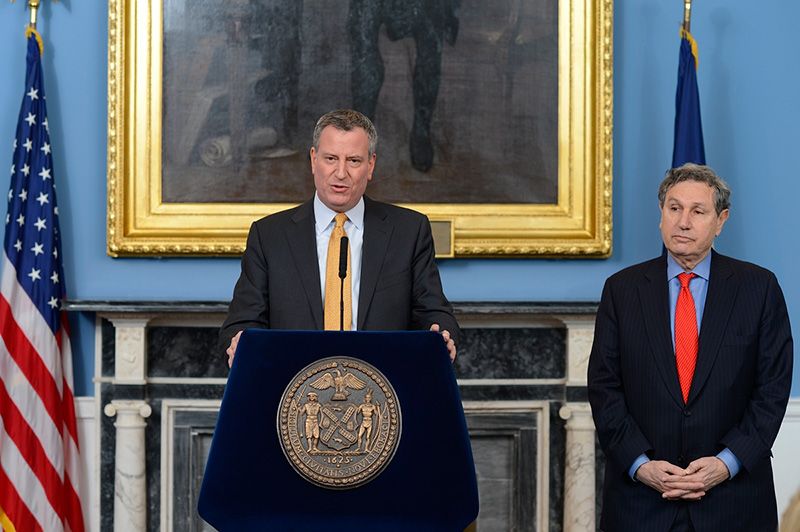 “Let me be clear,” New York City Mayor Bill de Blasio, channeling President Obama, said during his first State of the City address on Monday, “We want to work with the real estate industry to build. We must build more to achieve our vision. But the people’s interests will be accounted for in every real estate deal made with the city.”

To the casual observer, Michael Bloomberg’s term as mayor of the country’s largest city was a period of great vertical growth. “New York City comprises five very different boroughs,” commercial real estate scribe Steve Cuozzo wrote in his valedictory column in December, “but Michael Bloomberg dreamed of a single, shimmering metropolis — one of skyscrapers where none stood before; of desolate neighborhoods brought back to life; of moribund waterfronts teeming anew… In 12 years, he made much of his vision a reality.”

Skyscrapers rose in waterfront neighborhoods like Williamsburg, Long Island City, the Financial District and Downtown Brooklyn. Mid-rises started to fill in the rest of Williamsburg, Park Slope’s Fourth Avenue as well as Manhattan’s far west side. Given the apparently torrid growth during the Bloomberg years, does New York City really need to build more?

For all the anecdotes about a booming development scene, the numbers tell a much different story — one of a city whose building industry is in decline, and which only looks like it’s growing compared to the Bronx is Burning years. 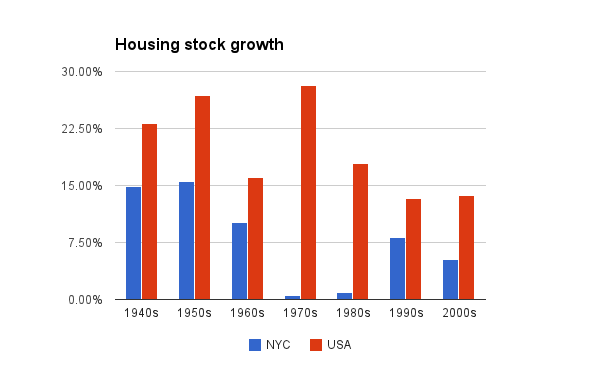 New York started off the postwar years with robust growth. In the 1940s and ’50s, its housing stock increased by around 15 percent each year. Rents and sales prices rose. Supply was meeting demand, and the market worked in a very Econ 101 sort of way.

But in the 1960s, things started to change. Two things, specifically: 1) New York took a turn for the worst, with crime escalating and the suburbs drawing more and more people away, and 2) a 1961 zoning code that put the brakes on development by freezing neighborhoods more or less as they were.

Housing production in the 1960s wasn’t awful, though the majority of the 10.2 percent housing growth was likely concentrated in building permits issued before the 1961 code went into effect. There was a tremendous rush of developers to file for permits while they were still allowed. Once those sites were built out and urban decline really set in, net housing production dropped to nearly nothing.

In the 1970s and ’80s, Staten Island developed at a very rapid clip — it saw 32.2 and 17.5 percent housing stock growth, respectively — but this was overshadowed by the massive destruction of buildings in Brooklyn and the Bronx, both of which lost units in both decades. (The Bronx lost an unprecedented 11.3 percent of its housing stock in the 1970s.) Parts of Manhattan and much of Queens, especially the central and eastern portions, were still in demand. Because the new zoning code precluded densification in those areas, however, the net effect was near-zero growth.

Which brings us to New York’s revival. The Giuliani years, roughly coincident with the 1990s, saw crime start to drop and the city start to become liveable again, plus a fairly reasonable rate of housing production. It’s likely, however, that much of this development was in fact rebuilding what was lost in the ’70s and ’80s, especially in the Bronx, which saw an 11.3 percent rebound in the total number of housing units, equal to the drop in the ’70s.

By the Bloomberg years, much of the burned-out apartment buildings in the Bronx and the poorer parts of Brooklyn had already been rebuilt, and housing production began to stall. For all the hype about development, Bloomberg’s was the slowest-growing decade on record, aside from the two decades of decline. (I couldn’t find housing data from before 1940, however a cursory glance at any random New York street will tell you that the pre-war period saw enormous growth in the housing stock, surely surpassing the numbers over the period I examined.)

Enter de Blasio. Last week, the new mayor finally got around to naming his housing team, charged with thinking up a fully fleshed-out plan for delivering 200,000 new or preserved below-market-rate housing units within 10 years.

The team includes Carl Weisbrod, wearing the dual crown of chairman of the City Planning Commission and executive director of the Department of City Planning. Weisbrod is an interesting choice, as he’s perceived to be closer to the real estate industry than many anti-development, pro-affordable housing progressives would have hoped for. He was, among other things, founding president of the city’s Economic Development Corporation, which is responsible for handing out multimillion-dollar annual tax breaks to new office buildings across Manhattan’s west side.

Vicki Been, until recently the head of NYU’s Furman Center for Real Estate and Urban Policy, was reportedly slated to lead the Department of Housing Preservation and Development. Given her work studying the New York zoning code — when journalists wanted to know how many square feet of development this or that rezoning would allow, they turned to the Furman Center — she might have been better suited to the role of chief city planner. But de Blasio pushed hard for Weisbrod, who headed his transition team.

Shola Olatoye, an affordable housing developer, will take on the unenviable task of running the New York City Housing Authority, tasked with tending to the city’s mammoth stock of towers at a time when the federal government’s role in public housing is receding and the average monthly rent in NYCHA projects is less than $500.

They’ll have until May 1 to come up with a plan to make good on de Blasio’s affordable housing promises. Whether they also set targets for overall housing stock growth and aim to reverse Bloomberg’s trend of declining new construction, per de Blasio’s (underreported) promise, remains to be seen.