Can a House Be Typhoon-Proof and Earthquake-Proof at the Same Time? – Next City

Can a House Be Typhoon-Proof and Earthquake-Proof at the Same Time? 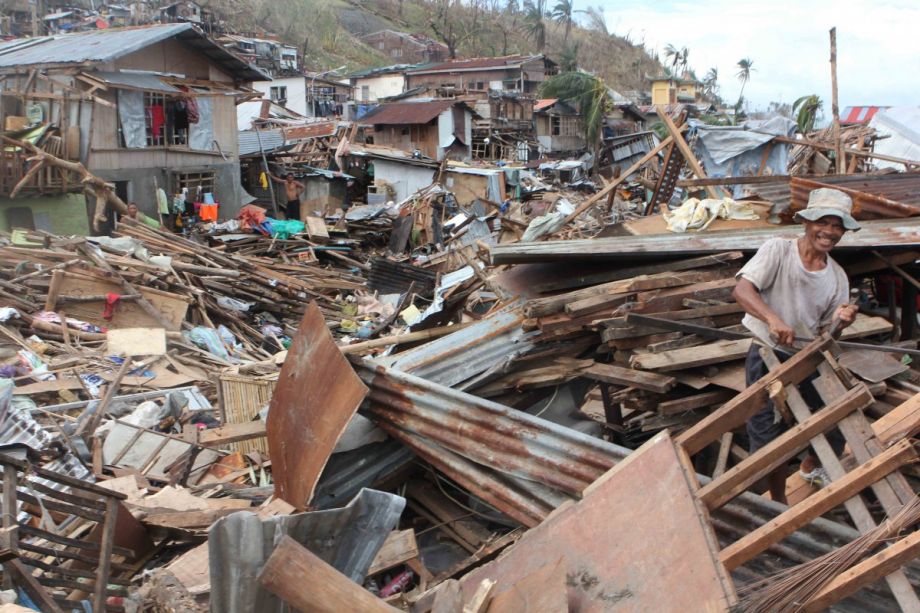 A man sifts through rubble in Anibong a week after Typhoon Haiyan. Photo credit: Ron Hose

These days, Tacloban is filled with the sound of pounding hammers and the grinding of handsaws – a welcome noise three months after this Philippine city became world-famous for its own destruction.

When Typhoon Haiyan tore through Tacloban on November 8, 2013, entire neighborhoods were crushed by the weight of the storm surge, or ripped apart by the 195-mile-per-hour winds of the strongest storm ever to make landfall. The scale of the devastation was overwhelming. Ten times the number of homes were damaged in the Visayan region of the Philippines as in the 2010 earthquake in Haiti. 4.4 million people were displaced from their homes – twice that of the Indonesian tsunami. The destruction was massive, but it provided an opportunity to rebuild homes that could better survive the next disaster.

Hugging the warm waters of the Pacific, the Philippine archipelago is the first to receive dozens of typhoons each season. It also sits right on the rim of the Ring of Fire – indeed, just three weeks before Typhoon Haiyan, a magnitude 7.2 earthquake rattled the same region. It’s a situation that Gordon Goodell, director of engineering for Build Change, an organization that specializes in rebuilding after disasters, describes as “tricky.” A month after Typhoon Haiyan, he visited Leyte, the province hardest-hit by the typhoon, as well as Bohol, the island province immediately southwest, which sustained the most earthquake damage.

The problem in the Philippines, says Goodell, is that while a wooden house fares better than a masonry house in an earthquake, the opposite is true for a typhoon. With the right construction and good quality materials, however, Goodell says that either type of house can be built to withstand winds of up to 200 miles per hour, as well as a major earthquake like the one that struck Bohol.

The biggest challenge to building back better in a country like the Philippines isn’t technical, however. The bigger issues are gaps in knowledge and money, and managing cultural perceptions.

“If people don’t know how to build back better, it’s certain they’re not going to do it,” says Goodell. “A huge part of the problem is that people just don’t know how. They’re just putting these things together any way they can make up.”

In the hard-hit city of Tacloban, that’s exactly what’s happening. Joel Mensisa, 30, a motorcycle-taxi driver by trade, is rebuilding his home on the same site as his old one, which was entirely crushed during the typhoon. Mensisa has never built a house before, and while it looks good for a first attempt, he says he received no special training in disaster construction. To prepare for the next typhoon, Mensisa says he’s using a lot of nails, but “whatever may happen, there’s nothing we can do. We just have to accept it.”

Joel Mensisa, a resident of Anibong, says this house is the first he’s ever built. Photo credit: Aurora Almendral

Getting information out about gusset plates, diagonal bracing and the importance of deep and heavy foundations can counteract the helplessness expressed by Mensisa. The goal of Goodell’s tour of the Philippines was to asses local building practices and find construction solutions that worked with local materials and existing supply chains. Part of Build Change’s program is to pass out fliers with simplified instructions on building techniques aimed at people like Mensisa, who live in slum areas and are rebuilding their houses themselves, without the help of professional engineers who understand (and stick to) Philippine building codes. (Goodell says the existing codes are sufficient to withstand typhoons and earthquakes, but compliance is spotty, and entirely non-existent in informal settlements and rural areas.)

Even simple fixes like installing metal strapping to hold down a roof costs money. People have to choose between building a safer house and, say, installing an indoor toilet, or buying a mattress, or even purchasing food. Goodell wants people to understand what the goal is — what building back better entails — so at least when they make a decision for or against it, they’ll have done so with complete information.

Another challenge to building better is that cultural preferences, rather than sound engineering, often dictate construction practices. In the Philippines, concrete houses are viewed as modern, and modern is seen as better. But poor-quality concrete is significantly less safe than a wooden house. Goodell has seen hollow blocks for sale in the Philippines that you could break apart with your hands. Bad materials and woefully underdeveloped masonry skills mean concrete houses are often an inferior choice for rebuilding, particularly when carpentry skills in the country are generally good.

For poor Filipinos with fewer options, a native bamboo hut, often derided as primitive, is well-suited for the country’s disasters. Storm winds move through the thatch roof, and if that roof and the woven bamboo walls fall down on top of a family during an earthquake, it is unlikely to kill or injure them the way a shoddy concrete house might. And if the hut is damaged, it’s relatively cheap to build a new one.

Ken Nadado, 23, another motorcycle-taxi driver whose house was destroyed in the typhoon, contemplates the idea of rebuilding with a thatch roof. He understands the benefit of lightness, but says that in Leyte, there’s a superstition that an aswang — a winged, snake-tongued evil spirit that sucks fetuses from a woman’s womb — can penetrate thatch roofing more easily than corrugated tin or concrete roofs.

Goodell admits that changing cultural perceptions is beyond the scope of his work, but he also believes that most people want to do what’s right for their families. After a devastating event like Typhoon Haiyan leaves a blank slate behind, survivors have the most incentive to build safe housing. They have, after all, just lost their homes, and possibly friends and family. The consequences of not properly preparing for a disaster are painfully apparent. The trick is to build off of this and funnel funding and knowledge to put safety within reach of the people.

Three years from now, Goodell says, “What I don’t want to see is dilapidated plywood boxes that international NGOs have built for them that are now falling apart or rotting. What I would like to see is people living in permanent housing even if it’s small. I’d like to see people who have been given assistance to build something small and safe for their family that, in the building process, these people have seen how to do it right, so if they have a little extra money to build a sleeping room, they already know how to do this safely.”

Goodell cautions, however, that even a well-built house made of good quality materials has its limits. Such a house couldn’t stop the flood waters that drowned so many in the Philippines, and a tree or car propelled by a wall of water will crush any house with the force of a bomb blast. He encourages people to evacuate during major storms, but hopes that instead of them returning from evacuation centers to homes reduced to rubble, they can come back, clean up, and restart their lives again, sooner.