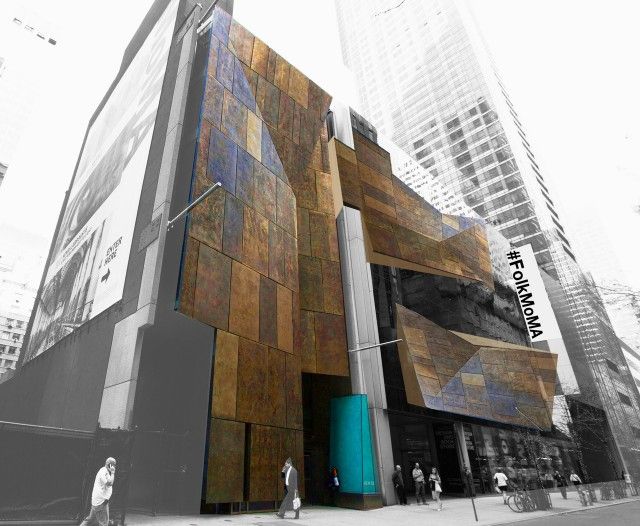 When news broke this week that the Museum of Modern Art in New York intends on demolishing the former American Folk Art Museum building next door, a cry went up in the architectural and preservationist community.

Now, a group of advocates is not only collecting protests to save the building, but also crowdsourcing design ideas for integrating the two adjacent museum structures.

It began on Wednesday night, when MIT Architecture’s Ana María León and The New School for Design’s Quilian Riano were bouncing around ideas for how to respond to news of the impending demolition. The next morning, they and what Riano described as “Twitter friends that every once in a while do projects together” had kicked off the online campaign.

Using the hashtag #FolkMoMA, those concerned with the demolition can submit proposals via social media — Twitter, Flickr, Instagram, the usual suspects — with the best to go up on the effort’s Tumblr page.

“Using an image of the building, quickly draw/sketch/photoshop/collage into it offering up possibilities for expansion over/under/across that incorporate the building,” read the instructions on the Tumblr.

Right now, the posted submissions range from humorous (a U.C. Davis police officer pepper spraying the American Folk Art Museum) to cathartic (breaking off parts of each museum and restitching them together), if never really approaching feasible.

“What matters to me personally is what this says to the larger architectural community,” said Riano, who also founded the research, design and activist studio DSGN AGNC. “How do we think about museums? Is just destroying them and building new ones okay?”

The folk museum building, designed by architects Todd Williams and Billie Tsien, opened in 2001. The actual American Folk Art Museum has since relocated to Lincoln Square, and MoMA purchased the building in 2011. The demolition announcement comes in tandem with a more general expansion plan for the modern art museum, which will eventually include five buildings.

Alas, the expansion as it currently stands makes no room for the folk museum building.

“MoMA officials said the building’s design did not fit their plans because the opaque facade is not in keeping with the glass aesthetic of the rest of the museum,” Robin Pogrebin reported in the New York Times on Wednesday. “The former folk museum is also set back farther than MoMA’s other properties, and the floors would not line up.”

This seeming commitment to architectural consistency — and tidbits such as director Glenn D. Lowry’s enthusiasm for “seamless floor plates” — has particularly touched a nerve among critics of the demolition.

“It’s as though the board voted to incinerate a Gerhard Richter painting because it didn’t match the floor tile or fit through the doorway,” wrote Architect magazine’s Ned Cramer. Critics on Twitter took a similarly harsh view:

MoMA director seems fetishistically GIDDY at the prospect of “seamless floor plates” than about ART or ARCHITECTURE. #FolkMoMA

The group behind FolkMoMA will wait to see what reaction the effort gets before deciding how to move forward. Riano said that while no one should expect a social media campaign to prevail over MoMA, the discussion about “what design could and should be” is just as important.

“Do we want mall-like museums?” he said, “or do we want museums that are efficient and maybe a little crazy?”