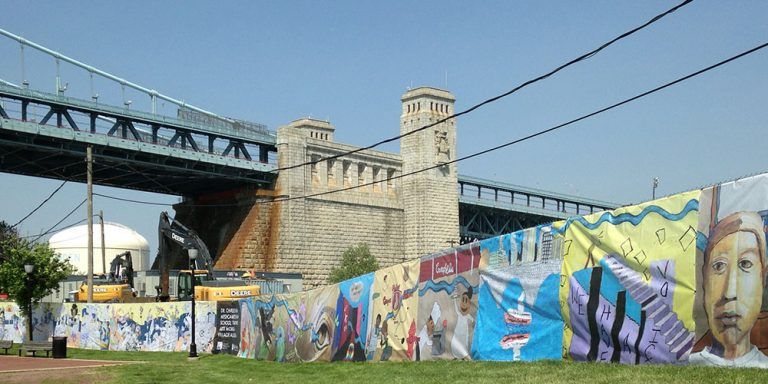 Update 4/20/2021: The exhibition officially opens on April 22; see below for a gallery showing two of the works, and read Next City’s in-depth article about a third project here.

“A New View” will rehab vacant lots along public transportation corridors into parks and art spaces, the Courier-Post reported.

There are seven proposed sites for the project. All are located on or along transit corridors, so when they are used as illegal dumps, they’re not just eyesores for residents, but for everyone commuting into or through the city.

Bloomberg Philanthropies made the grant as part of the Public Art Challenge, a project asking cities to include “the creative sector when developing solutions to significant urban issues.”

Kris Kolluri, the CEO of Cooper’s Ferry Partnership, a Camden-based community development corporation, collaborated on the proposal with the city and Rutgers-Camden Center for the Arts. He told the Courier-Post that the Bloomberg money is “one of the most meaningful grants from one of the most important foundations that Camden has ever received.”

Mayor Francisco Moran has said illegal dumping costs the city $4 million a year. “I have made solving this problem the cornerstone of my administration,” he said in a statement. In addition to the “A New View” project, Moran has been working with Cooper’s Ferry Partnership on two more potential solutions to illegal dumping. The Camden Collaborative Initiative runs public awareness campaigns about illegal dumping; they also partner with the police department to enforce dumping rules. Connect the Lots hosts programming such as movie nights, fitness classes and music festivals in Camden’s parks and vacant lots.

The new public art funds will go toward building on that work. The size and format of the artworks has yet to be determined, although officials are planning for work to “stretch along” the transportation corridors. Site cleanup and prep is scheduled to begin this spring, around the same time that requests for proposals from arts organizations go out. Installation should begin in 2020, Meishka Mitchell of Cooper’s Ferry told the Courier-Post.

“Camden is harnessing (the power of art) by transforming dumping sites into works of art along the city’s public transit routes, which will symbolize — and further spur — the city’s ongoing resurgence,” Michael Bloomberg said in a statement.

Four other cities won grants from the Public Art Challenge. Anchorage, Alaska, is transforming a neglected downtown building into a cultural center where artists will work with engineers to create works that draw attention to climate change. Parkland, Florida, and Coral Springs, Florida, will create five art installations to bring the community together in collective healing after the massacre at Marjory Stoneman Douglas High School in February 2018. Jackson, Mississippi, is creating a project around food access, including community gardens and an experimental food incubator. And Tulsa, Oklahoma, will create public art that celebrates Black Wall Street, the most prominent district of black-owned businesses in the early 20th century until it was devastated by racially motivated attacks in 1921.