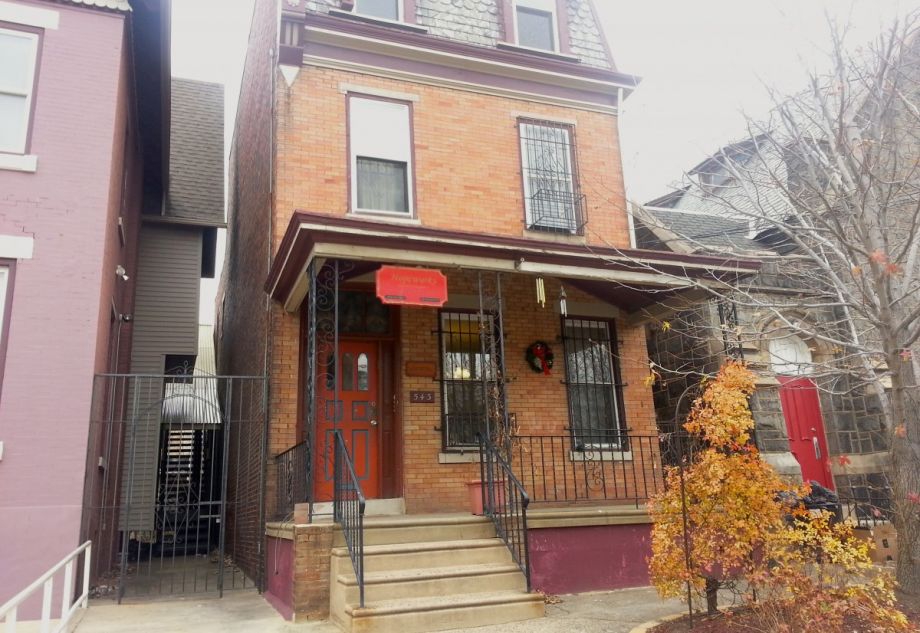 State Street between Fifth and Sixth streets in Camden, New Jersey is lined with faith-based service organizations operating out of handsome, but well-worn Victorian homes.

A three-story gabled house toward the eastern end of the block is the operating base of Hopeworks N’ Camden, which was humming with efforts of high school and college students when I visited last week.

At its core, the nonprofit is a workforce-training program that focuses on creating IT careers for Camden’s young people. More than that, it’s a well-regarded local consulting firm that provides tech services to hundreds of clients. Most importantly, it is a second home and a retreat for teens and college students — many of whom are Camden natives who have had to cope with the scarcity and hardship that has continuously plagued the South Jersey city for their whole lives.

In the census district where Hopeworks is located, 43 percent of the residents don’t have a high school diploma (nationally, that number is 15 percent). Statewide, New Jersey has 9.4 percent of residents living in poverty, but in Camden, that figure is a staggering 47.8 percent.

Three Camden churches helped to open Hopeworks in 2000. Since then, the organization has helped more than 1,000 young people get to college, start careers or earn GEDs. Trainees work at Hopeworks, providing services in web design, geographic information systems (GIS) and the global cloud computing platform Salesforce. Framed printouts of some of the nearly 200 websites they’ve designed line the walls of the building’s main floor — along with self-portraits the students make as a part of their web design coursework. They’ve also provided GIS services to close to 60 clients.

“We offer a service and people hire us to work for them, just like any other consulting firm,” says Luis Olivieri, GIS director. “We just finished a project with the Merchantville-Pennsauken Water Commission to locate their fire hydrants using GPS technology.” Olivieri’s students geolocated and plotted close to 1,200 fire hydrants, and Hopeworks also designed the commission’s website.

“My name goes with that data, so I did a thorough spot-check of it,” says Olivieri. “When I did the check, it was really good. I was really proud of the students. … I told [a colleague] that some of my best co-workers have been 15 years old.”

As my tour guide, Theadie White, takes me around, I ask her if she likes working there. The Hopeworks web intern and Camden County Community College student says, “Yeah, I like it. It pays me, so that’s awesome. But it also gave me a lot of skills I didn’t expect that I needed improvement on. I’ve gotten a lot out of it and a lot of other people can get a lot out of it, as well.”

When White shows off the facility’s library, she makes a point to explain how the room also serves as a place for the youth to express their feelings during the daily check-in sessions that are a part of the organization’s trauma-informed care focus.

“I like the trauma-informed care, because it gives people a sense of how they’re coming into the work day,” says White. “Some days, you’re really not feeling it, and you can just say, ‘I feel really annoyed and no, I don’t want to check in.’ I appreciate that. The next day I might not feel that way.”

Jesuit priest Father Jeff Puttoff, the executive director of Hopeworks, strongly emphasizes that this approach is a critical aspect of the organization’s mission.

“We have a lot of youth who have toxic stress,” says Puttoff. “People are overwhelmed by what’s happening in their life. Lots of times, people think, ‘Wow, Camden has poor youth and what they need are resources.’ But the things is, if you’re overwhelmed, you can learn some patterns of behavior, and science finds that the brain adapts in a way that when you get your job, you blow it up.”

Puttoff mentions biological theories about post-traumatic stress disorder (PTSD) and cortisol, the stress hormone, and how they contribute to brain health. He has also held two trauma summits in the past couple of years that take a look at how adverse childhood experiences affect the behaviors and health of young people.

While these theories have a firm scientific basis, I admit feeling slightly unsettled by this paternalistic and somewhat experimental approach. Maybe an undertone of disconnect I was perceiving was heightened by the fact that Hopeworks’ gorgeously renovated residence, Community Responding in Belief (C.R.I.B.), uses an acronym of an outdated slang term as its title — one of a few ways I felt like the organization was reaching to be “down.”

Regardless, I believe what Hopeworks is doing is of utmost importance in the city. Puttoff is absolutely right in his belief that all of the new economic development that’s happening in Camden could have a minimal effect on relieving the poverty of residents if it isn’t combined with any sort of remediation that acknowledges the experiences and social and physical context of the city’s residents.

“It’s a total set-up. It’s a solution that doesn’t take into account what’s happened to people. … We are actually positing a different framework for understanding Camden and what it needs for the future. And it’s not that it doesn’t need jobs and investment. It does. But jobs and investment that aren’t linked to healing will continue what is happening in Camden.”