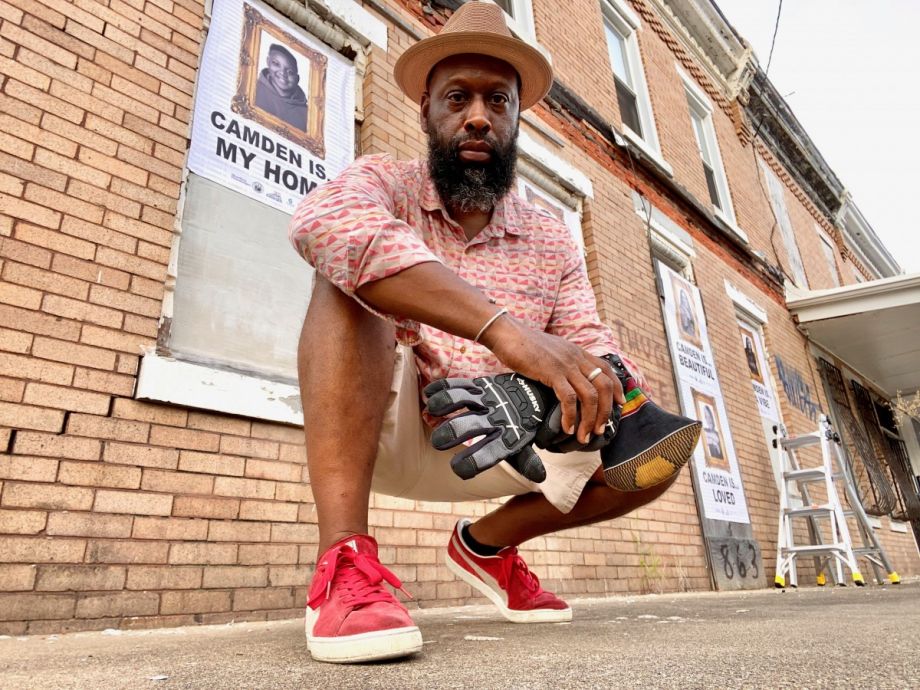 For Camden resident Erik James Montgomery, his city is many things, but “blighted” is not one of them. Montgomery, a self-taught fine art photographer and the founder and instructor at EJM Foundation, is part of a cohort of artists working on a Camden-based series called “New View Camden.” The project is endeavoring to remake Camden’s image as a city “invincible,” a reference to a line from Walt Whitman’s poem I Dream’d in a Dream, in which he writes: “In a dream I saw a city invincible.”

The scope of the series consists of eight different sculptures and installations throughout the city that will be placed on or around illegal dumping hotspots. Some artists will be using recycled and found materials, and all are placing their projects on a dumped spot, to both reclaim the area and deter further dumping.

Montgomery, whose project is titled “Camden is Bright Not Blight,” features powerful portraits of Camden residents, from a two-year-old to a person battling addiction to the mayor. It’s “a panoramic view of the city,” he says. The portraits are installed on abandoned and vacant buildings and houses, in areas targeted by illegal dumping.

“It’s to let you know that Camden is a shining beacon in this dark world,” says Montgomery, “and it’s the people that make it bright.”

The project, funded by a Bloomberg Philanthropies grant, also aims to reverse negative and harmful stereotypes about the city of Camden — stereotypes that have led to the community being “dumped on,” both literally and figuratively, he says.

“The goal is to change the mindset of how people from the inside and outside view Camden,” he says. For Montgomery, his project is more theoretical than the other seven installations.

“I don’t want people to be dumped on,” he says.

The project is a partnership between the mayor’s office, Coopers Ferry Partnership, and Rutgers Camden Center for the Arts, along with a team of curators.

“We are spreading the message that illegal dumping is a crime,” says Vedra Chandler, project manager at Cooper’s Ferry Partnership. “It is unjust and not going to be tolerated.”

The project is meant to look at trash in two ways, she says. First, is the illegal dumping that comes from outside the city. It’s not uncommon for people to come from outside the city with a pickup or U-haul full of household or industrial waste, and dump it, she says, adding that it’s happened in her own backyard. There is also the chronic issue of residents not knowing what to do with their bulk trash, she says.

Residents are no longer tolerating the consequences of redlining, she says, like waterfront property and neighborhoods being prioritized for dumping, sewers and incinerators, rather than people, bike lanes, greenspace and playgrounds.

“Because it’s not a wealthy or predominantly white community, Camden is subject to a lot of what we identify as “‘disrespect,’” she says. “And we are looking forward to an era of respect.”

The city spends about $4 million per year to clean up illegal dumping in Camden, and has an app and website for residents to upload photos and report incidences of illegal dumping. The City, Camden County Police, and the Camden Collaborative Initaitive’s illegal dumping task force have been tackling the problem head on, working to revitalise the city, reduce the financial burden and restore its residents’ sense of pride in their neighborhoods.

“I would ask people to please revise their expectations, and not think that they know everything about this city,” she says. “It’s time to take a different look.”

Gallery: Camden is Bright Not Blight

Seven of the eight New View Camden projects were put on hold for 2020 due to COVID-19, but the artists plan to unveil them on Earth Day of 2021. Montgomery and his subjects were able to safely social distance while he photographed them, so his project has continued.

Montgomery’s foundation emphasizes public, accessible art and classes for the “art insecure,” those who don’t have access to museums and galleries, or at least don’t think they do, he says, and the foundation has a special focus on reaching at-risk children.

“People [of Camden] think art is so far out of their sphere,” he says. “I want to break that mindset.”

When he heard about the Bloomberg grant, he knew he wanted to do a photography-based public art project, and he knew he wanted it to emphasize the “power of imagery,” and “self-esteem” in inner cities, where people of color aren’t often portrayed positively.

“Because if you feel good about yourself, you’re gonna treat yourself and your city very differently,” he adds.

The subjects are photographed all over Camden, in his studio, on their porches, or on the street. The portraits are black and white, and framed in gold.

“The mindset in inner cities,” he says, “is if you see someone in a picture like that — they are wanted by the cops, or they are dead.”

He went into the project knowing that this was the prevailing mentality: “I really wanted people to know from the door that I’m setting these images against what you can google about Camden — criminals, crime, mugshots.”

So, after hanging his artwork he often hangs around it for a while, waiting for residents’ inevitable queries and then explaining that he “likes to give people their flowers while they’re still alive.”

Under each portrait is a word, chosen by the subject, that characterizes what Camden means to them. Affirmations like “Camden is… up next,” “… evolving,” and “… my future,” adorn the portraits. During the photography process, Montgomery asks each subject to recommend someone else for a photograph. As a result, many of the subjects in the photographs know each other, or are recognizable to the residents.

“There’s really only one degree of separation in Camden,” he says. “It’s so small, and so connected, by beauty, and pain.”

Montgomery is about halfway to his goal of 100 portraits, which he hopes to reach by the end of November. With fears of another COVID lockdown looming, he wants to have the project ready as a sign of hope for the future.

“No matter what you say about us, no matter how much you dump on us, we’re going to endure because we’re an invincible city,” he says.

Tags: arts and culture, placemaking, trash, for whom by whom, camden