Camden, A City for Others – Next City

Camden, A City for Others 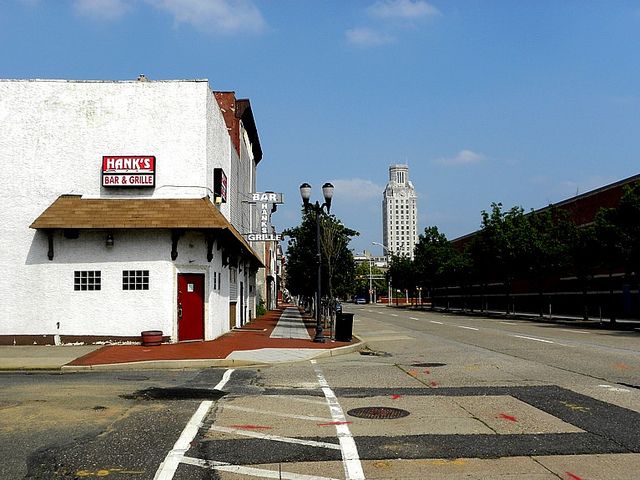 Camden was once described to me as “the part of New Jersey that is so bad, everyone tries to forget it exists. Except it’s probably worse than everybody realizes.” But when I got a job at Rutgers University-Camden, I stubbornly decided to live there. So I started asking questions about the city, buoyed by a wonderful previous experience in “dangerous” New Orleans.

The more questions I asked, the more I heard, “Why would you move there?” often followed by a brief, obscure reference to corruption, crime, drugs and blight, mostly from people who had never stepped foot inside city limits.

While these critiques are real, they miss out on some subtler advantages of Camden. Beautiful waterfront at affordable prices, a lifestyle where I can walk to work, and such easy access to Center City Philadelphia that Camden could be nicknamed Philadelphia East. No one would talk to me about what it was like to live in Camden every day, in part because few in my circles had spent any time there. I moved into a space at the Victor Lofts anyway, happy to find the historic building no longer blighted and back in use.

After a month in the city, what I’ve learned has surprised me. This city is not designed for its residents. And its residents know that.

One story sums up my first month in the city. Recently, I took a trip on PATCO, the commuter rail line connecting South Jersey to Philadelphia. For me, PATCO is a much-needed lifeline from the Camden streets, which are so quiet on weeknights that I daydream I’m in a post-apocalyptic movie set, to Center City Philadelphia, where young professionals are perennially out to play.

On this particular day, like so many others, I found myself waiting for a train to Philly, watching as trains moving in the other direction took suburban Jerseyites away from their day jobs and back to their families, passing through Camden unnoticed.

The station was almost empty — it was just myself and a homeless man and woman in their mid-20s. I was sitting and reading. They were going through the trash.

“I’m so sorry,” the young woman said to me. “We’re homeless and it’s going to rain, and we need the trash bags to keep dry.” They emptied the trash bags, made holes for their heads and arms, and apologized again.

Something about their apologies bothered me. It’s an interaction I find myself returning to time and time again, because there are hints of it in many of my Camden experiences. When I walk through a new neighborhood, I’m inevitably asked if I’m looking to buy a home. If I stop by a new shop, the owner wants to know if I’ve moved to the area. And yes, when I park my car downtown, I’m often blatantly approached and asked if I need drugs.

It’s as if the city so desperately needs people with disposal income that those who have it are catered to relentlessly. And underneath such puzzling interactions is a deep frustration that much of Camden is not designed for its residents because of their low incomes.

As a result, residents seem to have a deep suspicion of outsiders hidden under the politeness. They know that the waterfront caters to visitors and tourists. They know that until a recent scholarship program by Rutgers-Camden, the poor public school system meant few local students attended the university. They watch every day as Campbell’s, one of the largest employers in the city, runs buses from the Broadway PATCO stop to its offices so employees don’t have to walk the Camden streets.

The message to local residents is clear: The nice things here aren’t for you. We need other people.

That is what it’s like to live in Camden. To be forgotten in your own city. To know that when money is spent, you will be invisible. That the state runs your school system and the county your police department. That $175 million was spent on the waterfront, and your sewage infrastructure is falling apart. That even one of your biggest historical allies, lawyer Peter O’Connor, thinks that half of the poor people in Camden need to be pushed out to the suburbs if Camden is to be reborn.

Living in Camden is knowing all these things and still calling the city home.

Dr. Stephen Danley is an assistant professor of public policy and administration at Rutgers University-Camden. He is a Marshall Scholar and graduate of the University of Oxford. Find him on Twitter @SteveDanley.