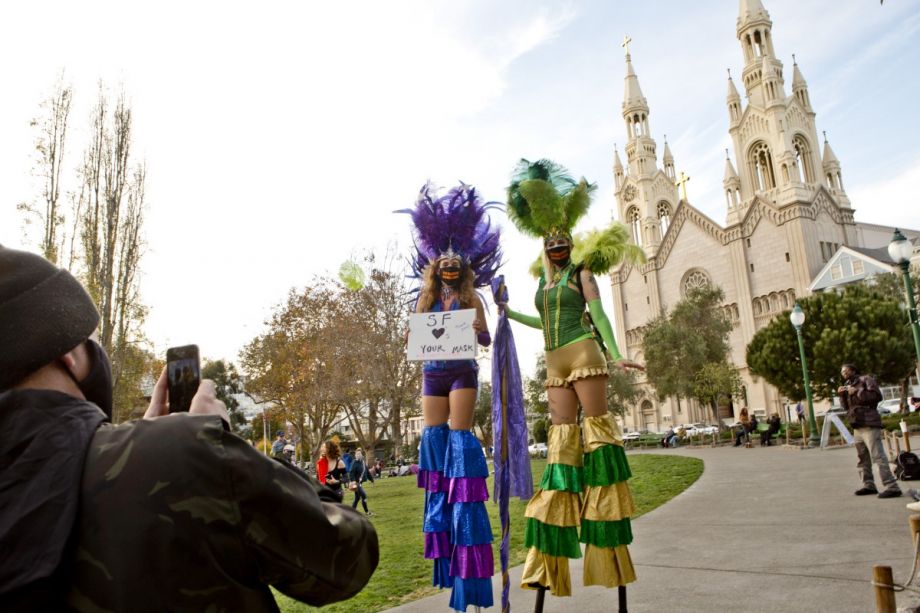 Late last year, if you happened to visit San Francisco’s Golden Gate Park, you might have stumbled upon artists on six-foot-tall stilts, sharing reminders of social distancing and mask wearing. Or you might have spotted a musician strumming guitar melodies, accompanied by a woman in a butterfly costume — a “social distance butterfly” out to share similar messages of safety.

These artists were part of SF Creative Corps, a pilot program that launched in November to provide work to Bay Area artists financially impacted by the pandemic. Each artist was tasked to creatively and positively spread messages of COVID-19 safety in well-trafficked public spaces throughout the city. This work may serve as a blueprint for a massive expansion: California Governor Gavin Newsom recently proposed $15 million for a statewide pilot across the 2020-2021 and 2021-2022 budget cycles.

“To pilot a statewide effort, artists in communities across the state — who are already doing the work — will be uplifted and supported to help bring joy and inspiration to people when it’s needed,” explains Deborah Cullinan, chief executive of the San Francisco-based Yerba Buena Center for the Arts, which oversaw the local pilot. “It’s my hope that we’re working with folks in the Labor Department, and other state agencies, to really think about … an ongoing career pathway program that really acknowledges that artists can help drive healthy outcomes in communities.”

Yerba Buena Center for the Arts has a long history of collaborating with San Francisco city agencies on public art projects. For this pilot, the center worked with the Office of Economic and Workforce Development. “We had a shared goal of providing paid opportunities for under-employed artists, particularly those hardest hit by the pandemic, and also to advance healthy behavior in public space,” says Cullinan, also a member of Governor Newsom’s Jobs and Business Recovery Taskforce.

The larger vision, she notes, was “what the WPA program of today would look like.” And indeed, the Jobs and Business Recovery Taskforce’s November report to the governor recommended the state expand public-private partnerships to create programs similar to the SF Creative Corps.

While the SF Creative Corps served as proof of concept for the state, artists have long practiced community building in times of crisis. (Artists played a large role in sharing safety messages during the Ebola outbreak, Cullinan points out.) “Art as social or political action is not a new idea,” Stella Adelman, a participating artist in the pilot, puts it.

What was new, however, was creating a government mechanism to support artists in this work with living wages. To do so, Yerba Buena Center for the Arts and the Office of Economic and Workforce Development partnered with four San Francisco arts organizations, Paint the Void, San Francisco Bay Area Theater Company, Dance Mission and SF Carnaval, to employ 60 artists as “Community Health Ambassadors” over the span of seven weeks.

Adelman, the managing director at Dance Mission Theater, helped recruit and curate Community Health Ambassadors. The first weeks of planning included negotiating fair pay, developing safety messages that did not shame people for their behavior, and safety measures for the artists themselves. (Ambassadors enforced and followed city-mandated public health measures, including social distancing and PPE.)

“We had to develop art that can roam, because of issues of crowd gathering,” Adelman says. “Artists had to figure out how to move their practice — which is sometimes on a stage — to being a moving practice.”

Adelman ventured out on stilts with the artist Robin Lara, of Robin Lara Circus. “We’re on stilts, so we could show where six feet is, marking it on our bodies as a visual thing,” Lara says. Sometimes she used a long stick to create another virtual marker of distance. She and Adelman carried signs with messages like “masks are sexy.” According to Lara, “It was a perfect mix of fun and safe.”

The pair had to refine their performance on-the-ground, testing what kind of music would be most effective (Cabrera settled on “a guitar riff that sounds good and I could play on loop”) as well as tactics to avoid creating crowds. “I’d fly around an intersection, finding a way to keep six feet from anyone who walked by because I had my wings open,” says Peerzada.

In-person performance was halted at the end of December as COVID-19 cases spiked. Artists got the opportunity to continue the work virtually; Peerzada and Cabrera developed a short public service video about masks and social distancing.

This February, Yerba Buena Center for the Arts released a report summing up the pilot so far.

Of the total grant amount of $250,000, $150,000 went to YBCA, with $120,000 going directly the Community Health Ambassadors and partner arts organizations, $15,000 for production supplies and support for the ambassadors, and $15,000 for YBCA to administer the pilot. The additional $100,000 was allocated to arts organization Paint the Void for its engagement of visual artists.

The proposal to take the pilot statewide is an opportunity to deepen and improve the work, says Adelman. A few components, in her mind, are crucial: providing liveable wages for all the artists involved — “it should be more than just a stipend,” she says — more partnerships with local, community organizations, thinking critically and collaboratively about best locations to send artists to spread messages of public safety, and the most effective ways to spread those messages.

For everyone participating in the pilot, they spoke to the sheer joy of providing public artwork at a time of deep uncertainty and limited social contact, as well as the effectiveness of positive messaging around safety.

“It felt like everyone involved understands that art is something that not only communicates information, but helps human beings synthesize and act on information,” says Peerzada. “The question wasn’t how to make this message cute. The question was, how can we inspire people to be different, to act on that information?”

Editor’s note: Due to an editing error, this article originally misstated Adelman’s role in recruiting and curating Community Health Ambassadors. We’ve corrected the piece. After receiving more information from YBCA, we’ve also clarified how the funding was allocated.