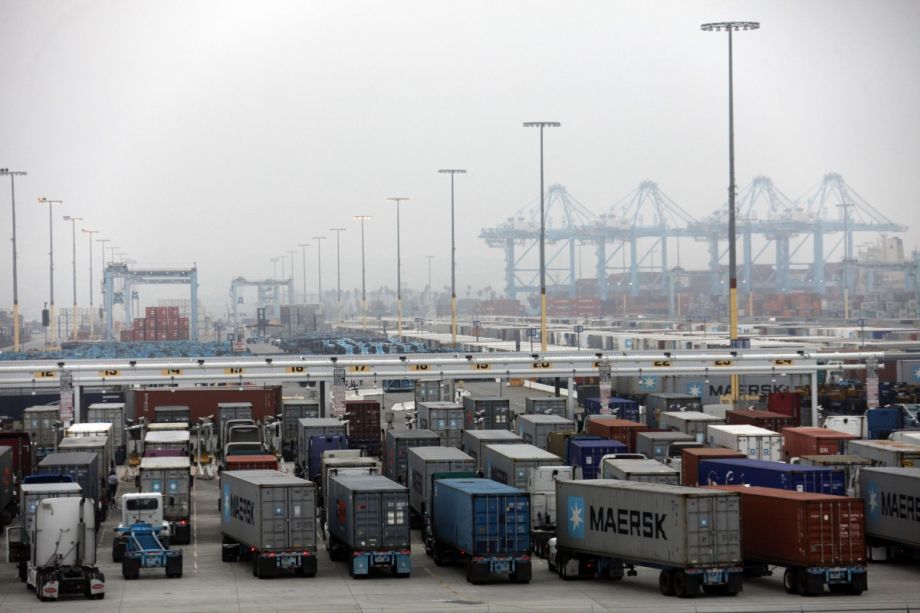 Trucks line up to enter the Port of Los Angeles. (AP Photo/Nick Ut)

It’s a Tuesday morning, and Gregorio Reyes has unloaded organic spinach from his truck in Salinas, California. He’s just arrived with the delivery from Yuma, Arizona, and he pauses to talk for a few minutes while he waits to load up again.

“The nice part [of trucking],” Reyes says, “is you see places you never would have imagined. You travel through tremendous landscapes. If you were working in a factory, you’re not able to see how beautiful the country is.”

Reyes has been driving trucks since he was a young man in the state of Puebla, Mexico. In 2005, Reyes opened his own trucking business. The recession, however, forced him out of business in 2010.

“The situation was terrible. A lot of truckers, of small businesses, it affected us a lot. We dealt with the crisis of rising gas prices, and it led me to close the business and to start working for people I knew,” Reyes says.

Reyes heard an ad on the radio about financing available for independent truckers in the spring of 2016. “I called, and they gave me the address where I could go to talk, and I talked with [the loan officer] who handled the paperwork for my loan,” he says.

By June, Reyes had a new truck and was working for himself again. Today, he and two employees travel the lower 48 states picking up produce and making deliveries. “I always wanted to work for myself and to have my own company, and here we are working,” Reyes says.

The radio ad was from the Opportunity Fund, a nonprofit loan fund with federal certification as a CDFI — a community development financial institution. Based in San Jose, California, Opportunity Fund currently serves borrowers in 12 states. The loan fund had just started offering loans for independent truckers to obtain more environmentally-friendly vehicles.

Opportunity Fund’s truck driver loans are part of the On-Road Heavy-Duty Vehicle Air Quality Loan Program, created in 2009 by the California Air Resources Board, the clean air agency for the state of California. Under the program, the California Air Resources Board guarantees against losses for loans made in alignment with the program’s goals — encouraging participating lenders to make loans they might otherwise view as too risky to make.

Despite the logos that may adorn the sides of their trailers or containers they’re pulling, many truck drivers are actually independent contractors with their own fleets comprising just a handful of trucks at most. The Owner-Operator Independent Drivers’ Association estimates that there are between 350,000 and 400,000 independent owner-operators in the United States. They’re small business owners, and they often face hurdles getting financing from traditional banks. Reyes described it grimly: “I’ve had this experience of having problems, my engine broke down, and [a lender] says ‘We don’t offer that kind of help.’ They let you die on your own.”

Eric Weaver, the founder of Opportunity Fund, concurs that truck drivers often face various financing barriers — many are people of color and immigrants, especially in the communities Opportunity Fund targets.

“By and large, it’s a group that doesn’t have collateral to put down for a loan, maybe doesn’t have the highest credit score you’re going to see,” Weaver says. “Buying a truck is a huge deal for them, but they often don’t qualify for affordable financing.”

Opportunity Fund is just one of around 20 lenders who are currently participants in the On-Road Heavy-Duty Vehicle Air Quality Loan Program. In October 2018, the California Air Resources Board joined with California State Treasurer John Chiang to announce that the program had resulted in more than 20,000 loans made since inception.

A press release compared the impact of the loan program to “removing 98 tons of pollution from our air and the equivalent of three million cars from our roads.” The effort fits with the state’s mandate to reduce emissions to 1990 levels by 2020 and 40 percent below that by 2030.

The pollution reduction the truck loan program is achieving has an impact on more than just the planet’s health — it’s also critical for people. Environmental Health News reported that Chronic Lower Respiratory Disease, that is, potentially fatal diseases that cause breathing-related problems by affecting the lungs, disproportionately affect residents of the San Joaquin Valley. The valley and Kern County in particular lie along the fastest route by automobile between Los Angeles and Sacramento, the state capital. California Department of Public Health data indicate that one out of 37 people who died in Kern County died from chronic respiratory disease — twelve times the state average.

“As the White House continues to pursue energy policies that would reverse the progress we’ve made in fighting poor air quality, California is showing how we can clean our air while helping small business owners modernize and compete,” said Treasurer Chiang, as he announced the program’s 20,000-loan milestone at an event in October 2018.

EDITOR’S NOTE: This story has been updated to reflect that the state does not cover all possible loses related to loans under the heavy duty vehicle air quality loan program.