California Is Considering a ‘Radical’ Statewide Upzone – Next City 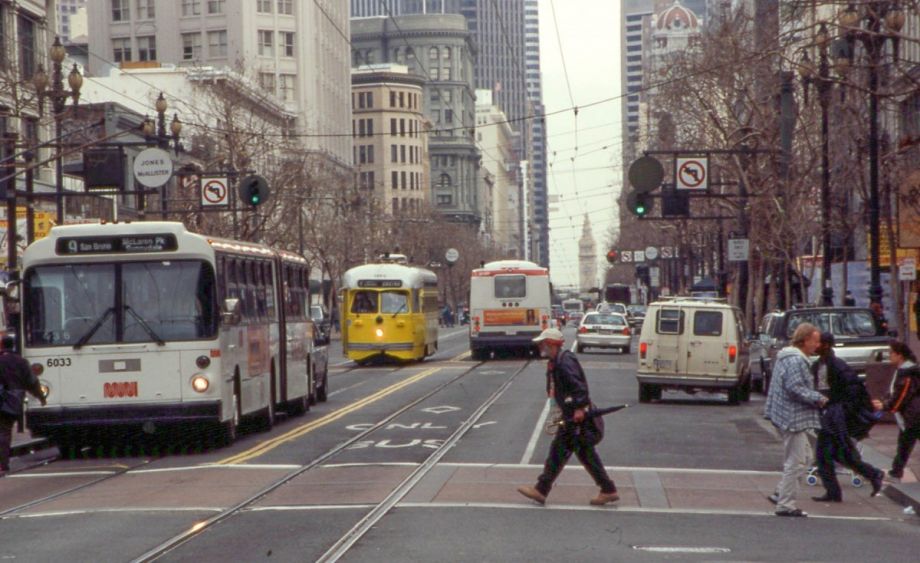 That California is in the midst of a statewide housing crisis is not a particularly controversial statement. A 2016 report from the McKinsey Global Institute puts some stark numbers on it. Real estate prices are rising three times faster than household incomes and 50 percent of the state’s population cannot afford housing. The state is also adding new residents faster than it’s building housing. To address pent-up demand, McKinsey found that California will need to build 3.5 million homes by 2025.

While there’s widespread agreement on the fact of the crisis, there is very little on how to address it. California State Senator Scott Wiener has proposed a radical solution: removing density limits and parking requirements and up-zoning every transit-oriented neighborhood in the state. The controversial bill has drawn support from YIMBYs, the tech industry and others who say bold action that spurs lots of new housing construction is the only thing that will make a dent in the problem. It has garnered opposition from some mayors, neighborhood councils, low-income community groups and the Sierra Club California chapter who oppose the loss of local control, oppose new housing in general and worry the bill could accelerate gentrification and displacement in low-income communities and communities of color.

“The lack of housing affordability is harming our state’s economy as companies consider moving elsewhere because their workers can’t find a place to live. It is severely undermining our climate goals as we push people into longer and longer commutes. It harms our diversity as lower income people and people of color are pushed out of urban cores. It undermines the health of communities and families,” says Wiener.

His goal is to spur construction of tons of housing built near transit — not only increasing the supply, but increasing it with supply that doesn’t necessarily require people to use cars as their primary or only mode of transportation. If passed, his bill would preempt local residential zoning restrictions for areas within a half-mile radius of a major transit hub or a quarter-mile radius of a high-frequency transit corridor with no more than 15-minute waits between buses or trains. Maximum buildings heights could be between 45 and 85 depending on the neighborhood. Wiener points out his bill just raises maximum height limits, it doesn’t set a minimum height for developers and areas that have already been up-zoned to allow those heights won’t see further height increases. The bill would also get rid of minimum parking requirements and density limits for housing construction.

“For a long time we have allowed local communities almost complete latitude whether to build any housing at all,” says Wiener. “California has lots of major transit hubs zoned exclusively for single family homes and other low density housing as far as the eye can see. It makes no sense to have low density zoning around major transit infrastructure. That’s exactly where we should put high density housing.”

Analyzing the exact impact of the bill is difficult since it would permit greater heights and density, not mandate it. But efforts to analyze how much of Californian cities could be up-zoned show the affects would be widespread. Sasha Aickin, the former CTO for Redfin, produced a map illustrating roughly where California would see the bill’s effects. In transit-rich cities such as San Francisco and Oakland, almost every neighborhood falls within the definition of the bill. The impacts are not quite so expansive in Los Angeles and San Diego, but major portions of those cities would still see up-zones. Even small cities around the state get spots of height increases.

It is the sort of sweeping action the pro-housing activists YIMBYs (short for Yes In My Backyard) have been clamoring for.

“We are full throated super fans,” says Laura Foote Clarke, executive director of YIMBY Action. “It’s the boldest thing that’s been proposed in California housing. I think it could stop prices from rising. I don’t think it’s going to bring them down, but stopping them from going further up would be a nice change.”

She continues, “This really does target the single family owned whiter wealthier neighborhoods in San Francisco and Oakland. They are there ones that will actually see a change in their zoning.”

Some advocates worry, however, that low-income neighborhoods and communities of color will see significant changes that will further exacerbate displacement pressure. L.A.’s Crenshaw Subway Coalition likened the bill to Andrew Jackson’s Indian Removal Act, and said that the up-zones in South L.A. will lead to displacement of low-income people of color as 5- to 8-story market-rate buildings get built and rents and property values rise.

The Sierra Club’s statewide chapter sent a letter to Wiener voicing its opposition on similar grounds and more. In addition to raising concerns about the potential for displacement, the organization worries that the bill could lead to less transit construction if communities worried about the up-zones fight new transit projects.

The Club’s opposition has raised some eyebrows, given the environmental impact of transit-oriented development. UC Berkeley environmental law professor Ethan Elkind points to a recent study that found building all new development in California within three miles of transit would lead to “annual reductions of 1.79 million metric tons of greenhouse gas emissions compared to the business-as-usual scenario.” That reduction is the equivalent of taking 378,000 cars off the road.

There are plenty of groups taking a middle ground on the bill—that it’s a worthy effort that still needs work.

“TransForm has been calling for more housing near transit for over twenty years now, and we’re glad to see all the conversation this bill has inspired,” says Joshua Stark, state policy director at TransForm, a social justice-focused transportation and land use advocacy nonprofit. “This bill has the potential to really benefit people, if it can also ensure gains for affordability and the climate. For example, it could include provisions to support affordable housing and transit benefits that help reduce driving and vehicle ownership.”

Wiener says he is open to the criticism, especially from low-income community groups who face the greatest risk of displacement. He points out that his bill does not override local rent control or inclusionary zoning requirements or limits on demolition (In San Francisco, for example, there are strict rules limiting the demolition of affordable housing). He is also working to expand the bill to include stronger language about displacement and possibly expand San Francisco’s demolition controls to other cities.

But, Wiener says, “Displacement pressure comes from a lack of housing and people with means pushing out lower income people. … To be clear we need housing at all income levels—market rate housing and low income housing. But shutting down development or stopping increased transit density is not how you stop displacement.”

The bill has yet to get a hearing in the state senate and surely faces an uphill battle.

“This is a hard bill, no doubt about it,” says Wiener. “It’s getting opposition, for sure. But it’s also getting a lot of support from all over the state because people intuitively understand that you need housing around transportation. That’s what prevents sprawl.”