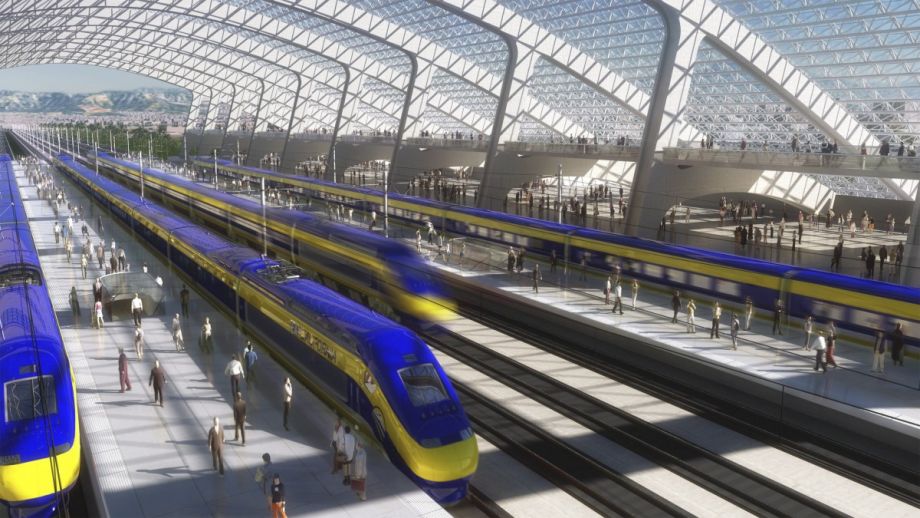 California HSR Breaks Ground Today
Today at noon Pacific Time, at the northeast corner of Tulare and G streets in downtown Fresno, an audience of about 1,200 invited dignitaries and their guests will watch as officials ceremonially break ground on the California High-Speed Rail Authority’s initial route segment.

Among those in attendance, The Sacramento Bee reports, will be Gov. Jerry Brown, fresh off being sworn in for his fourth term as governor of California.

The groundbreaking is purely symbolic, of course, and the project to link San Francisco and Los Angeles with a 520-mile railroad on which trains will operate at speeds of up to 220 mph still has a number of hurdles to clear. But the ceremony marks a major step forward for a project that has experienced numerous delays.

Work on the line, which is currently expected to cost $68 billion to complete, was supposed to have begun in September 2012, but delays in the bidding process, lawsuits challenging the project’s ability to deliver on its promises and difficulties in assembling the land for the initial segment pushed back the start of construction. The project still faces a Sept. 30, 2017 deadline for completing most of its trackage through the San Joaquin Valley from Merced to Bakersfield, a requirement that came along with federal matching funds for the line’s initial segment. The state’s share of the segment’s cost comes from a $9.9 billion bond issue approved by voters in 2008. The state has $6 billion on hand for construction of the San Joaquin Valley segment, a little less than one-fifth of the $31 billion total price tag for building the initial operating segment from Merced to Burbank.

Dubai Adds Tourist Trolley to Its Rail Collection
What happens when a government has so much money it can’t figure out what to do with it all? If the experience of the Persian Gulf emirate of Dubai is any guide, it goes out and collects things — in this case, rail transit lines.

To Dubai’s metro and LRT system mix, add a tourist trolley. The Gulf News reports that a one-kilometer-long initial segment of the Dubai Trolley will go into service by the end of the first quarter of 2015 as work on the segment’s track and stations is nearly complete.

The double-deck trolley cars will be powered not by an overhead wire but by electricity generated by hydrogen fuel cells, the first application of fuel cell technology to wireless streetcar propulsion. The cars have an old-timey appearance but are thoroughly modern, with an open top deck and an enclosed, air-conditioned lower deck. The lower deck windows will be removed in the winter for the comfort of passengers, the news report states.

Emaar Properties Managing Director Ahmad Al Matrooshi was upfront about the line’s most likely users, telling the Gulf News, “Dubai Trolley is a smart urban mobility service that further builds on the trolley tram systems that are in use in several cities across the U.S. and Europe. While they were a game-changer in public transport when first invented in the 1880s by introducing a new concept to urban mobility, they are now largely used as tourist attractions.”

When completed, the trolley’s 7-km route will connect the Burj Khalifa, two downtown hotels, the Dubai Mall and the Opera District with the Dubai Metro line.

Will Bertha Kill Another Seattle Tunnel?
While puzzled construction crews continue to try to unstick Bertha, the tunnel-boring machine that’s currently dead beneath Seattle’s downtown waterfront, Seattle Mayor Ed Murray worries that if Bertha fails to dig out the Alaskan Way Viaduct replacement tunnel, it could undermine his plans for a fourth downtown tunnel, this one for another transit line.

In a call to the Seattle alt-weekly The Stranger, Murray explained that Bertha’s fate could affect plans he is working on for a light-rail transit tunnel that would carry a line connecting West Seattle with Ballard beneath downtown, running under 4th and 5th avenues.

Elaborating on his fear, Murray explained, “If for some reason we’re a jurisdiction that can’t build this tunnel” — meaning the Alaskan Way replacement — “then I suspect that the state won’t be able to pay for another tunnel, and that will massively damage our ability to bring the high capacity transit that we need from West Seattle through downtown.”

Sound Transit would need to place a referendum before the voters to authorize construction of the new transit tunnel, which would join an existing freight tunnel, the Alaskan Way tunnel and the Link light-rail tunnel connecting downtown and Capitol Hill with the University District as another piece of underground transportation infrastructure in central Seattle. There’s no definite timeline for this happening, but Murray is concerned that the Alaskan Way bungle could kill public support for any new tunnel construction projects in the city.